Michael Brown, managing director at psLIVE, discusses how experiential agencies are a viable alternative to ad shops as a first port of call for campaign creatives or strategy.

"No good idea ever came out of a brainstorm." So stated Sir John Hegarty, otherwise fondly known as the H in Bartle Bogle Hegarty - the creative agency of global renown - as part of a talk he was giving at the Soho Hotel earlier this year to launch his then new book: Turning Intelligence Into Magic.

Undoubtedly this was a brilliantly controversial shard of rhetoric tailored to shock a room in which ideas are the stock in trade of both speaker and audience. When you further consider that the brainstorm was actually invented by the ad industry, you might conclude that Sir John was, in metaphorical terms, shooting the child of his creative and spiritual forebears: [brainstorm inventor] Alex Faickney Osborn would be spitting feathery expletives if he were still around today.

I am not sure how many of you know this, but Osborn was co-founder of New York based ad shop BBDO (now Omnicom owned). It was he who authored the first group technique for creative problem solving, set rules for the technique as far back as 1942 and described it as the brainstorm in his 1953 book Applied Imagination. The brainstorm then is well past retirement age and has had a free ticket to ride on public transport for at least a decade. Please give up your seat.

But is Sir John right? Should we ignore or even, depending on our seniority, sack the next creative director who invites us to the latest gathering of sharp and shiny minds that has become the everyday staple of agency life these past 70 years?

Can we go further? If the brainstorm, and by extension the creative director, are outmoded vestiges of the past, when every campaign cascaded spring-like from a moment of inspiration clandestinely conjured in their closed shop environs, should we not be questioning the role of the creative agency as first port of call for a good campaign idea? Will we even need them, as they exist now, in the not too distant future?

Consider this: Apple’s recent campaign, Shot on the iPhone 6, is a great idea (on going to press I am unable to confirm if it was created in a brainstorm): it showcases stunning snaps that iPhone users from around the world have fired off with their devices. 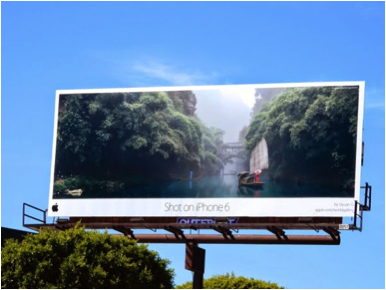 In every instance, the shots were so artistically striking that they looked like the work of a pro. There was no ad agency required to dream the idea up in the first instance and certainly no need to send a crew to create the work in a series of exotic, wallet-bursting locations. Apple’s customers are doing it all. The only qualified person needed for this kind of work is a humble designer on a few hundred quid daily to create a nice, on-brand boilerplate, flexible enough to adapt to various mediums, onto which you can drop the work of your customer.

This is UGC deployed at scale, an approach that turns the brand away from advertiser, and repositions it as publisher – a strategic approach that is increasingly prevalent. Therefore, if your strategy is always the same, your client is now a publisher and their customers provide the content, then the ad agency may not always be the first port of call to get a campaign out of the traps.

In one of my previous blogs Real Time Experiential we saw how lots of people, from Canon to Captain Morgan to Camelot, are experimenting with experiential as the vehicle to create user generated content, or content featuring consumers (CFC) and broadcasting it in real time to DOOH. The same content is then deployed across the mix to creatively inform the entire campaign from TV to social and all points in between.

To nick my own words in that previous piece, this puts live activation at the heart of a media plan, placing experiential and digital practitioners at the centre of the mix. The main thrust of my argument being that, in the future, we could see all content for any creative campaign flowing from the live activation with experiential agencies driving the campaign idea. In such a paradigm, how would an ad agency have to evolve to have a stake in that particular world order?

Nick Bailey, chief executive of digital creative agency Isobar, has a view: "In this context the role of the creative practitioner is not eliminated; it is simply changed – and changed into something very different from the world where ‘creative’ was the special responsibility of a privileged elite in an advertising agency."

Bailey is a lot more than the chief executive of Isobar, a company operating in 70 countries under the strapline of 'ideas without limits'; a philosophy that is perfect for the other hat he wears to work – he is also their executive creative director. I could not have asked a better person to comment.

He continues: "The explosion of forms and means of creative expression driven by digital in the last 20 years demands a different approach to creativity; one that has more in common with the process of invention, where many disciplines are involved, collaborating with each other, trying things out, iterating, being prepared to fail and try again."

Bailey’s comments reverberate in our recent collaboration for adidas, in which psLIVE was actually the home of the campaign idea: a high-tech, immersive experience that allowed footballers to trial product around the recent football boot launch Ace and X 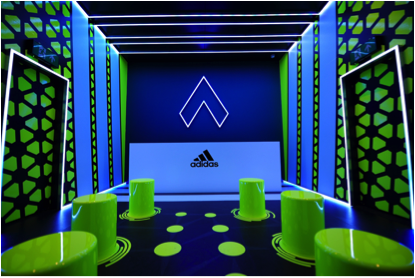 Players were invited to participate in two challenges that helped them to identify their playing style. Adidas believes there are two types of footballer, those who control everything and those who create chaos. We recorded their performance scores before making personalised product recommendations based on the type of player they were.  Players where then invited to show off their skills in a specially designed 2 v 2 football arena against the pros. 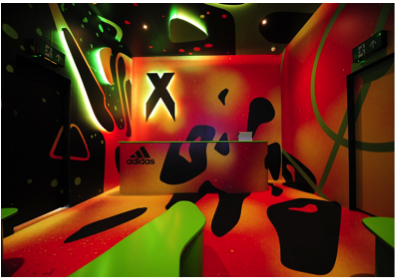 In this case, the ad agency creatively shaped (see above) the look and feel of our live activation – taking the lead from us. Isobar designed the corresponding digital experience and the media agency Carat drove huge awareness around the campaign to make manifest Nick Bailey’s earlier quote around cross discipline collaboration.

Interestingly, five of the ad agencies in the UK Top 10 - Publicis, Leo Burnett, VCCP, WCRS and McCann - include experiential in their service offering. Plainly these guys are intent on fully owning all the means by which a brand story can be told, but what is certain is that however the landscape continues to evolve, the future remains a very rosy place for experiential specialists.

Now, who is in favour of renaming the brainstorm as an ‘Osborn’ in honour of the great man who gave us the institution?

Blog: How to... cater for brand events

Blog: Turning an experience into a story