Bloomberg Businessweek is to launch a four-week outdoor brand advertising campaign to promote the "personality" of the magazine ahead of new Europe edition in 2012.

The ads break on Friday (2 December) in the UK and are part of a multi-million US dollar global campaign led by WPP's MEC, which will run in the US and Hong Kong.

The creative work for the campaign, developed by Bloomberg's internal agency, is inspired by recent stories from the magazine and each ad will contain a large photograph and one word in bold followed by a wider explanation.

The campaign uses the themes "Fresh", "Venturesome" and "Revolutionary".

The "Fresh" ad features a photograph of a frozen meal and explains the need for Tesco to expand its frozen food range to fulfil its US expansion ambitions.

An adapted Johnnie Walker logo appears on the "Venturesome" work. It refers to the challenge faced by the brand, to sell whisky to the cognac-mad China.

The "Revolutionary" ad contains a shot of an ice-cream cone to illustrate a story about frozen-yoghurt entrepreneurs in Egypt.

The campaign, which was planned internally with buying by Out Of Home International, will include digital outdoor at London City Airport, 48-sheet cross-track posters at national rail stations and sites on the London Underground.

At London City Airport 10 to 15-second spot ads will appear on 30 digital screens in the departure lounge and Bloomberg Businessweek magazines will be distributed as part of a sampling exercise.

"The creative inspired by the magazine's editorial brings that personality to life as we continue to innovate and expand in print, online and mobile."

At Bloomberg, the copywriter was Eric Hirschfeld and art direction was by Keith Venkiteswaran.

Bloomberg Businessweek is set to launch Europe and Asia editions in January 2012. The new editions will have global editorial from Bloomberg's 800 reporters and more regionally focused content and separate ad pages. 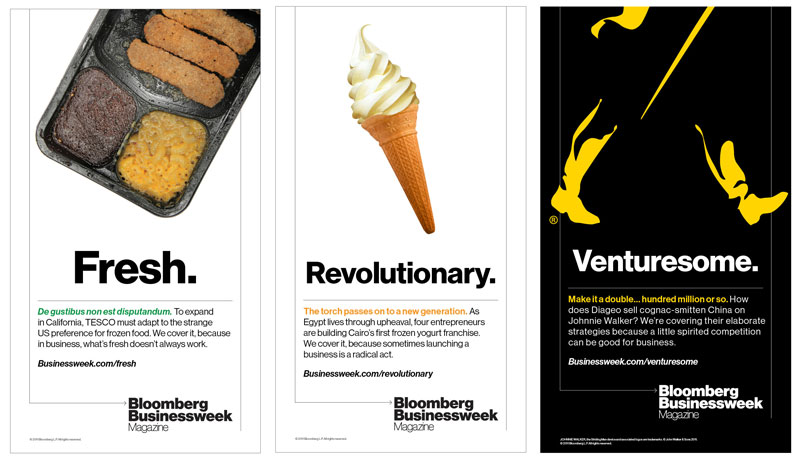 The Year Ahead For ... the City