Disney chief executive Bob Iger has stepped down in a move that has shocked Wall Street.

He has recently led the company’s streaming service launch and made several high-profile acquisitions. Iger will be succeeded by Bob Chapek, chairman of Disney Parks, Experiences and Products. 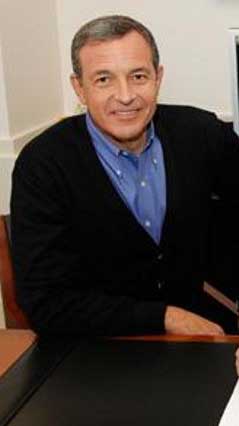 Iger (pictured, right) will take on the role of executive chairman to direct Disney’s "creative endeavors" and lead the board until his departure at the end of next year.

He said: "With the successful launch of Disney’s direct-to-consumer businesses and the integration of 21st Century Fox well under way, I believe this is the optimal time to transition to a new CEO."

"I have the utmost confidence in Bob and look forward to working closely with him over the next 22 months as he assumes this new role and delves deeper into Disney’s multifaceted global businesses and operations, while I continue to focus on the company’s creative endeavors."

Chapek will be the seventh chief executive in the history of the company and will oversee all of Disney’s business segments and corporate functions. He will report to Iger and be appointed to the board at a later date, the company said in a statement. His successor has yet to be announced.

Before beginning his career at Disney in 1993. Chapek previously worked at Heinz and J Walter Thompson (now Wunderman Thompson).

Disney gears up for streaming service launch with discount

Are you psyched or terrified by the launch of Disney+?