With Bond-mania gathering momentum ahead of Spectre's cinematic release, Marketing decided to take a closer look at some of the high-profile brands that are on board for the product placement ride.

James Bond was one of the first fictional characters to embrace product placement. Even before the markeing term itself was coined, and predating the advent of Bond on cinema screens, Ian Fleming’s novels were replete with brands, including the MI5 spy’s paper of choice (The Times), car of choice (Aston Martin) and even his favourite soap (Guerlain's Sapoceti, Fleurs des Alpes).

But it was when Bond went celluloid in 1962’s Dr No, with Sean Connery in the starring role, that product placement exploded (sometimes literally) within the franchise.

In October, Daniel Craig returns to the title role in Sam Mendes’ Spectre. Many brands have signed up, including some regulars such as Heineken, Aston Martin and Walther PPK.

But some brands have already caused something of a stir (or shake, if you prefer), such as the recasting of N Peal’s tight-fit cashmere jumper, which Craig can be seen wearing in the main promotional shot (as shown on the main image), and which he wore in Skyfall. Purists aren't keen on Bond wearing a poloneck, presumably because he's a shirt-and-tie man as far as they are concerned.

Range Rover is to appear in the film, as a villain’s car, with the baddies also driving a Jaguar C-X75.

While Bond doesn’t do smoking these days as he’s clearly very conscious of maximising his life expectancy, he will be boozing a lot - quaffing Belvedere Vodka, Bollinger and The Macallan malt whisky. Whether he ends up also drinking a pint of Heineken again as he did in the last film is not yet clear but the lager will feature at some point. 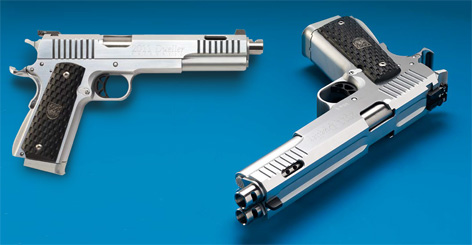 One gun brand trumpeted its association with Spectre and then went silent - Bulgarian gunmaker Arsenal Firearms proudly announced that its AF2011 Dueller Prismatic would be "one of the key weapons" in the film, but then withdrew the statement.

Craig himself, who receives fees to promote products aligned with the films, has responded to the inevitable backlash that accompanies every new Bond movie about the growing profusion of brands, pointing out that the money helps fund the high costs of making and promoting a Bond film.

Other brands to appear in Spectre include franchise returnee watchmaker Omega, which even featured by name in a cheesy dialogue exchange in Casino Royale, fashion label Tom Ford, a secondary character will be wearing Burberry, while gadget aficionado Q will be donning a Missoni striped sweater.

Sony has renewed its association with Bond, and 007 can be expected to be using an Xperia mobile to make calls and do smartphone stuff.

Note: we have sourced a lot of this information from the excellent and exhaustive Bond Lifestyle website.

How the 'invisible' Wimbledon sponsors used digital to make their mark

Licence to sell: is Bond's new-found taste for Heineken a brand-movie tie-up too far?

James Bond to swig a Heineken in Skyfall