An ad promoting medical tourism in Malaysia has been banned for trivialising cosmetic surgery.

A poster by the Medical Tourism Association, focusing on a procedure for breast enlargement, appeared in several motorway service stations and shopping centres.

Alongside simple illustrations implying two pairs of breasts (one smaller, one larger), the ad stated: "Did you know… ‘Boob job’ is the most popular cosmetic procedure for women."

It went on to state that, "Malaysia is proud to be one of the only countries in the region where medical tourism is promoted by the government," and promised quality care guided by industry standards.

The Advertising Standards Authority received one complaint about the ad, which claimed it trivialised cosmetic surgery by suggesting it could be incorporated into a holiday.

The outdoor media owner Admedia, responding on the Medical Tourism Association's behalf, said the ad was "informative and promoted safety and high standards" through its reference to internationally recognised awards.

Admedia said the ad used a "common colloquial term for breast augmentation, often used across several types of media" and rejected the idea it had advertised a holiday because there were no pricing, tourist or accommodation details.

The ASA said that while the ad's purpose of medical tourism was clear, its focus on breast augmentation – followed by an encouragement to have the procedure abroad – was likely to detract from the seriousness of the surgery.

The UK regulator said the poster could be interpreted as suggesting the decision to have surgery could be "undertaken lightly, without serious consideration of the nature of the intervention"

The British Association of Aesthetic Plastic Surgeons (BAAPS) has warned against travelling abroad for any kind of surgery.

Kevin Hancock, a consultant plastic surgeon and BAAPS member, said: "This ad completely trivialises the risks of surgery. Patients who opt for medical tourism are risking their health – often going without essential pre-surgical screenings or follow up care that would be standard practice in their home country.

"The public would be aghast to find information about open-heart or hip replacement surgery posted in a motorway toilet, and so should be equally shocked by this kind of inappropriate, socially irresponsible advertising of cosmetic surgery." 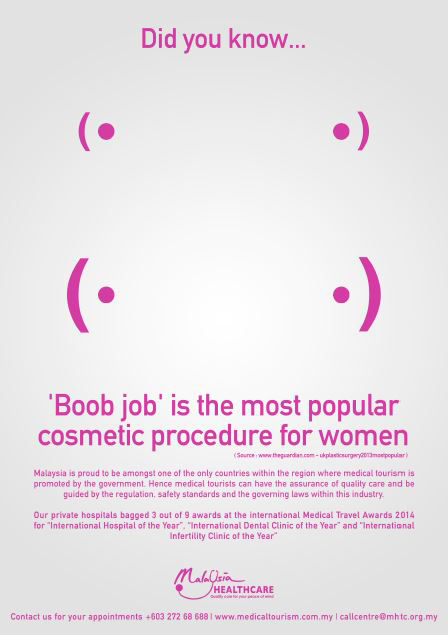