There were lots of talent, diversity and frankness on show at IAB's first Digital Upfronts for podcasts.

How much are brands willing to let podcast creators take control of their brand messages and does the medium have a future outside a metropolitan audience?

Those were among the many difficult questions raised during the first Internet Advertising Bureau Digital Upfronts for podcasts at Shoreditch Town Hall yesterday (3 October), bringing together the biggest players in the market: Audioboom, Acast, Spotify, Dax (Global) and The Guardian.

As well as the usual trotting out of celebrities (Jamie Carragher, James O’Brien, Jessie Ware) and general cheerleading for the medium that is to be expected of an upfront, there was a large amount of candidness about the challenges that the ad industry faces when getting deeper into podcasts. 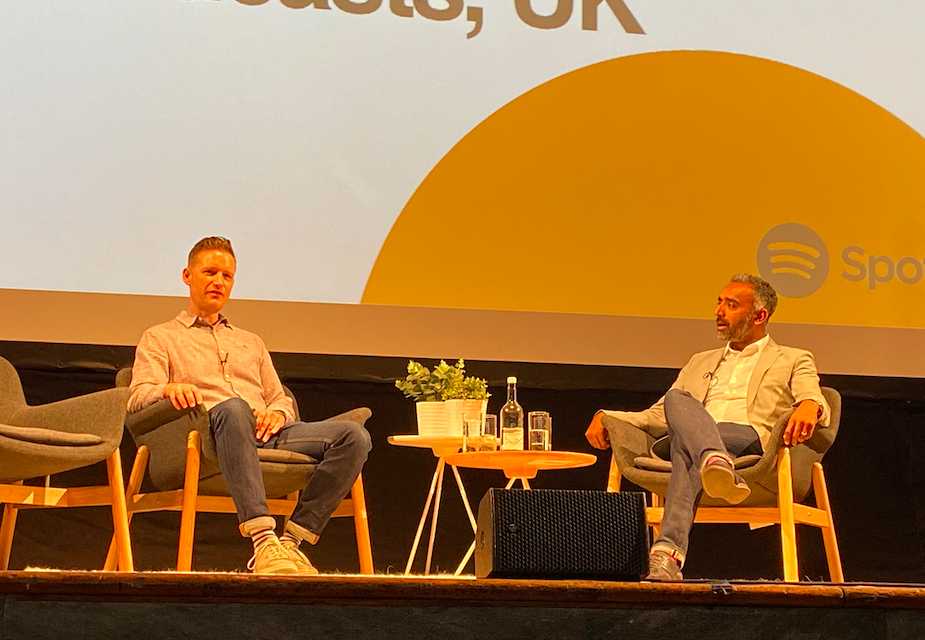 The most interesting parts of the five companies’ presentations tended to be the least glitzy. Spotify’s head of podcasts, James Cator, was refreshingly frank during a fireside chat-style dialogue with the streaming service's head of UK sales, Rak Patel (pictured, above).

Patel and Cator recognised that, although podcast listening is booming (according to Ofcom), Spotify’s own data shows that the listenership is overwhelmingly part of the London bubble.

Cator said: "It feels like podcasts should be completely democratising content creation and we have the capability to do that, but there is still a way to go outside of London. How do we get people think about listening and creating podcasts outside of London? There’s a wealth of talent that really needs to be tapped into."

He explained that there are three areas in which Spotify is trying to improve: curation, discovery and the challenge of people listening on different apps on different devices. For example, Spotify created a "Best of Reply All" playlist, while users have taken to curating lists of podcast episodes such as "What you need to know about Brexit". One of Spotify’s "big bets", Cator went on to say, is how to improve discovery more generally on the platform.

Podcasts have been a big play for Spotify generally as it has tried to grow audience beyond music listeners. And the platform’s audience skews much younger and is more diverse than that of other platforms, Cator added, citing internal research.

Acast's global senior vice-president of sales, Joe Copeman, addressed the issue of measurement – another key issue for brands. He welcomed the IAB's "2.0" measurement guidelines (which came into force on 1 October), with new listening filters that are, he said, "a big step forward for Acast and the industry".

The company also announced an industry-first audio partnership: Comic Relief and Acast will work together whereby the charity's work will be heard exclusively on the podcast network.

The diversity of the market was in full view as each company presented its offer in a different way (several speakers later assured Campaign that this was not choreographed and they were merely asked by the IAB not to make their sessions "too salesy"). 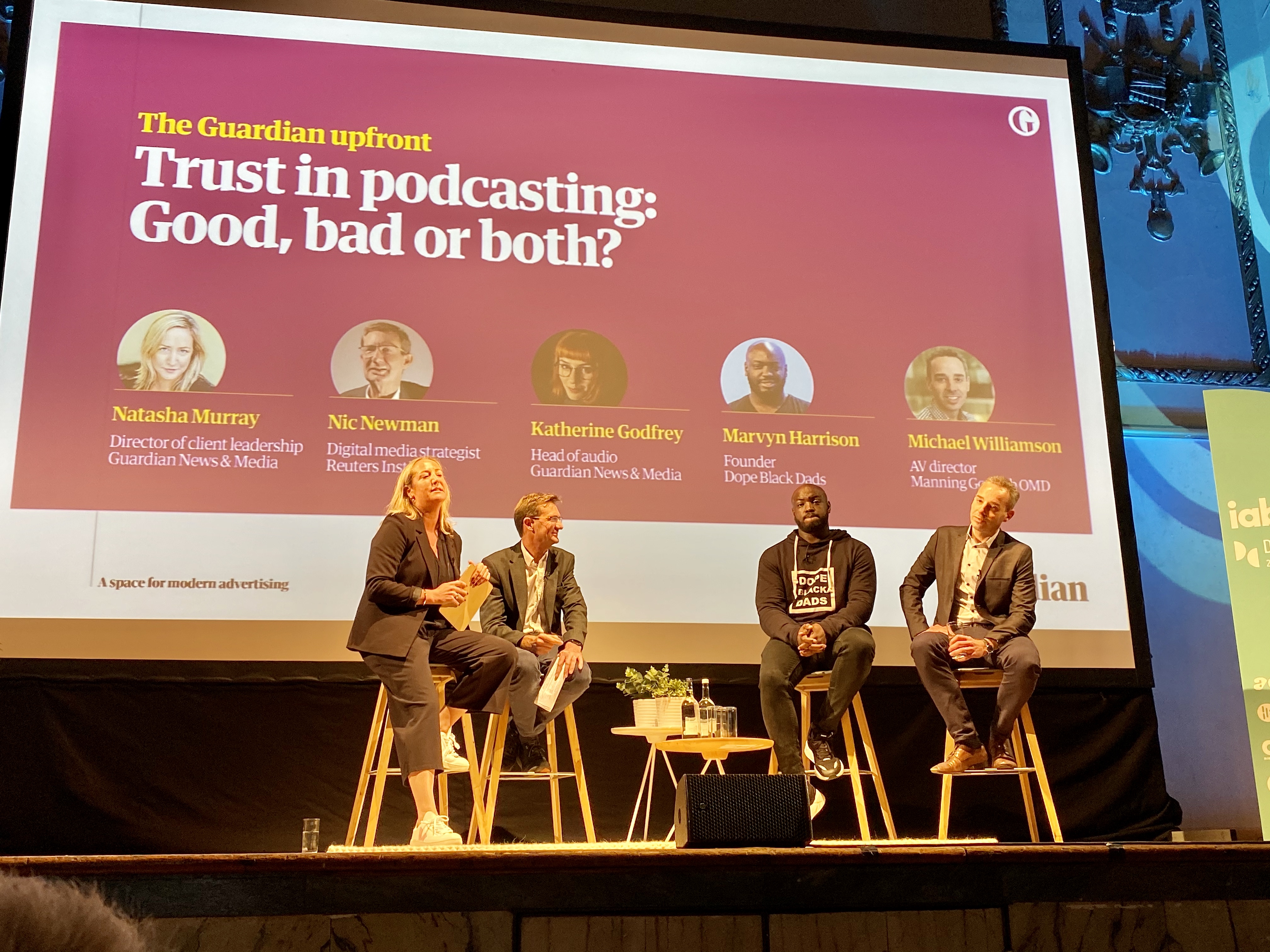 The Guardian, true to its journalistic brand, chose to hold a panel discussing the state of trust in the podcast market. Nic Newman from the Reuters Institute explained how trust in the media has fallen across the board and podcasts were fulfilling people’s need for more reliable sources and more depth in content.

"There’s something about the [podcast] experience which is very familiar. It’s linear. You can’t interrupt it, there’s no track record of audio being hacked, a lot of discovery mechanisms are pretty secure, these things aren’t spreading virally – they are spread by word of mouth or are human-curated. Young people are turning to this medium because it feels like a really trusted space."

And it appears we have crossed a tipping point when it comes to brand interest, according to Manning Gottlieb OMD’s head of AV, Michael Williamson (who was also on The Guardian panel).

"In the last six months, there’s been a lot more traction compared to a year ago," Williamson said. "More clients than you would think are looking at podcasts on media plans, creating their own or doing a sponsorship." 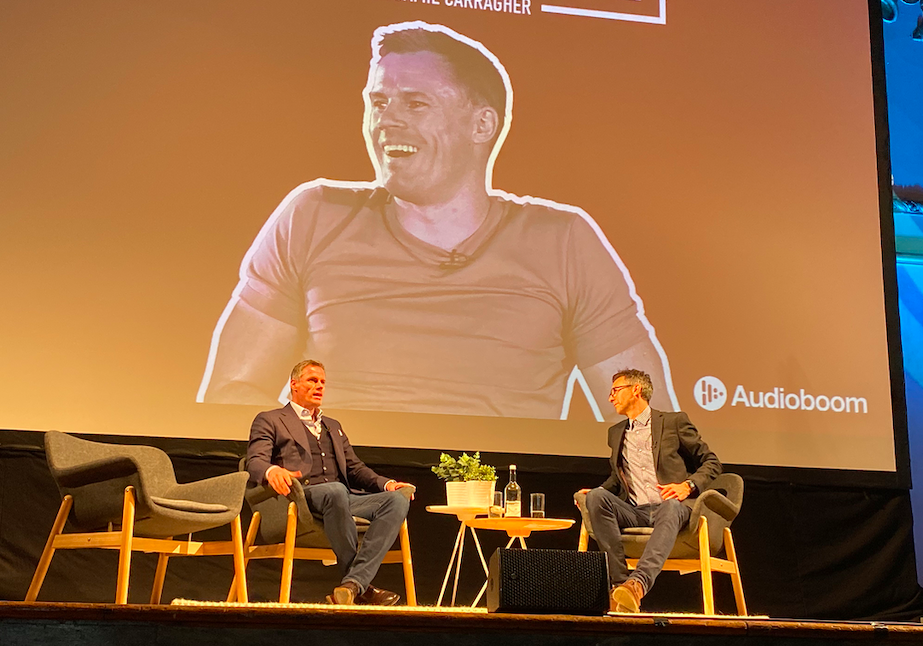 Audioboom, which offers spot ads and presenter-led ads, unveiled former footballer and Sky Sports presenter Carragher (pictured, above) as the host of a new show, as well as There’s No Such Thing as a Fish star Andrew Hunter-Murray.

Part of the appeal of ads read by presenters on podcasts, as IAB chief marketing officer James Chandler put it, is that "this kind of stuff is completely native and in the hands of the hosts".

But Hunter-Murray warned that this native element means that There’s No Such Thing as a Fish tries to be very careful about selecting which brands it promotes and being clear when the ads start and finish.

"It’s obviously important for the listener that they know when the ad is," Hunter-Murray said. "You make it very clear to them, but the other thing you’re trying to do is make it as fun and interesting as possible [so it] has the same energy and same mucking around that the rest of the show has. For you to say we are entering the serious advertising space, that is a sure-fire recipe for fast-forwarding."

As the medium grows in popularity, ad saturation will become an issue, too, as pointed out by several speakers during the event. Marvyn Harrison, a former Samsung content manager and founder of the Black Dope Dads podcast, criticised the wildly popular The Joe Rogan Experience for having some ads that lasted "six or seven minutes".

Harrison went on to stress the importance of brands working with podcast creators instead of dictating the brand messaging. "Sometimes you don’t need 30-second ads," he said. "Allow the creator to help curate the right experience for your brand."

Newman warned that podcasts were in danger of a "loss of innocence" as the medium becomes more mainstream. "How do you manage that transition? Ad density and programmatic adertising is the biggest danger. People will turn away if the experience isn't right."

Global’s Dax, meanwhile, was able to show off its cross-channel capability by using packaging live radio content into podcasts on its Global Player and promoting via its own outdoor estate (it bought Exterion Media, Primesight and Outdoor Plus last year).

ITV, which has a deal with Global to produce a companion podcast for hit show Love Island, announced that it is going to produce more podcasts (the broadcaster only produces five right now). Partnerships controller Bhavit Chandrani talked openly about how TV is limited by programming schedules and how ITV is looking at leveraging "superfans" of its most popular shows with more companion podcasts, including for soaps such as Coronation Street and Emmerdale.

Chandrani said: "Superfans are looking for additional content to get deeper into the show. Shows like The Xtra Factor and Britain’s Got More Talent have high cost, but podcasts can be raw, that feels in keeping with the brand values of the show but much cheaper to produce and quicker to turn around."

Podcasting is bringing two benefits for ITV, he added: it allows the media owner to extend deals with brands that are already partnering shows, such as Jaguar Land Rover and rugby, while podcasts can also attract brands that otherwise wouldn’t have the money to spend on TV, such as The Economist.

Why the clickthrough rate is anathema to long term measurement

BBC, Google, Amazon and influencers have no credibility, study finds