A look at the performance of Ann Summers in social media over the past four months. 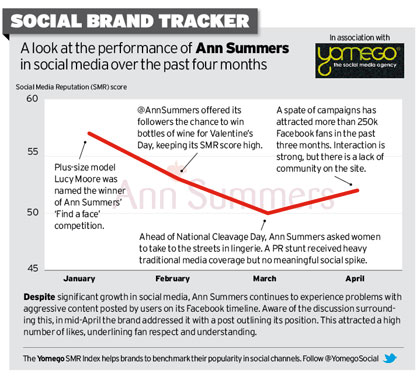 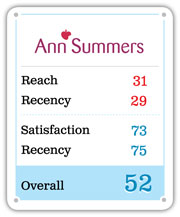 @AnnSummers offered its followers the chance to win bottles of wine for Valentine's Day, keeping its SMR score high.

Ahead of National Cleavage Day, Ann Summers asked women to take to the streets in lingerie. A PR stunt received heavy traditional media coverage but no meaningful social spike.

A spate of campaigns has attracted more than 250k Facebook fans in the past three months. Interaction is strong, but there is a lack of community on the site.

Despite significant growth in social media, Ann Summers continues to experience problems with aggressive content posted by users on its Facebook timeline. Aware of the discussion surrounding this, in mid-April the brand addressed it with a post outlining its position. This attracted a high number of likes, underlining fan respect and understanding.

The joy of sex marketing

Hit or Miss? Ann Summers searches for a 'real' woman to front collection