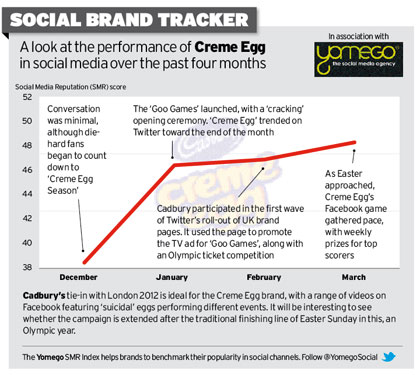 December
Conversation was minimal, although die-hard fans began to count down to 'Creme Egg Season'

January
The 'Goo Games' launched, with a 'cracking' opening ceremony. 'Creme Egg' trended on Twitter toward the end of the month

February
Cadbury participated in the first wave of Twitter's roll-out of UK brand pages. It used the page to promote the TV ad for 'Goo Games', along with an Olympic ticket competition 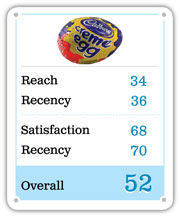 Cadbury's tie-in with London 2012 is ideal for the Creme Egg brand, with a range of videos on Facebook featuring 'suicidal' eggs performing different events. It will be interesting to see whether the campaign is extended after the traditional finishing line of Easter Sunday in this, an Olympic year.

#SocialSummit: how Cadbury Crème Egg boosted sales through the power of fans