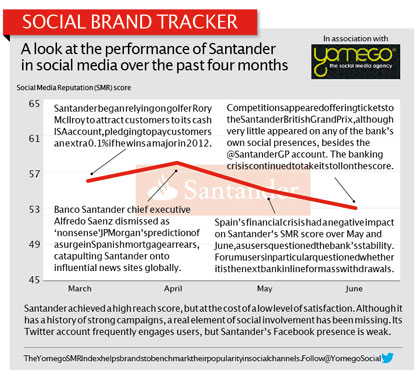 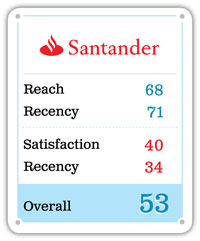 Santander began relying on golfer Rory McIlroy to attract customers to its cash ISA account, pledging to pay customers an extra 0.1% if he wins a major in 2012.

May
Spain's financial crisis had a negative impact on Santander's SMR score over May and June, as users questioned the bank's stability. Forum users in particular questioned whether it is the next bank in line for mass withdrawals.

June
Competitions appeared offering tickets to the Santander British Grand Prix, although very little appeared on any of the bank's own social presences, besides the @SantanderGP account. The banking crisis continued to take its toll on the score.

Santander achieved a high reach score, but at the cost of a low level of satisfaction. Although it has a history of strong campaigns, a real element of social involvement has been missing. Its Twitter account frequently engages users, but Santander's Facebook presence is weak.