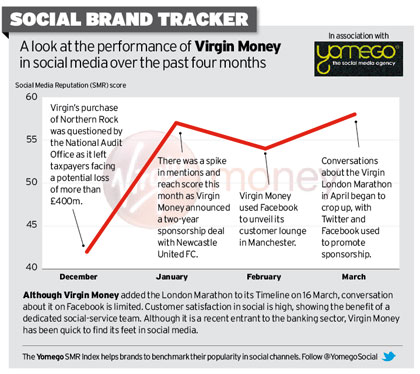 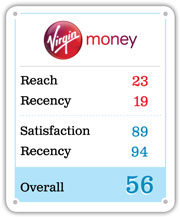 Virgin's purchase of Northern Rock was questioned by the National Audit Office as it left taxpayers facing a potential loss of more than £400m.

There was a spike in mentions and reach score this month as Virgin Money announced a two-year sponsorship deal with Newcastle United FC.

Conversations about the Virgin London Marathon in April began to crop up, with Twitter and Facebook used to promote sponsorship.

Although Virgin Money added the London Marathon to its Timeline on 16 March, conversation about it on Facebook is limited. Customer satisfaction in social is high, showing the benefit of a dedicated social-service team. Although it is a recent entrant to the banking sector, Virgin Money has been quick to find its feet in social media.

The National Trust turns to Facebook for Great British Day Out