He has spawned countless spoofs and merchandise, not to mention films. Daniel Kleinman on the appeal of James Bond.

His hair has a tinge of ginge, his ears stick out a bit, his face is handsomely craggy, and we are transported to a world of excitement when, on screen, he utters these immortal words: "My name is Bond ...Brooke Bond." Even the PG Tips chimps wanted a bit of the glamour to rub off on their tea-slurping antics and, 50 years since the first 007 film, Dr No, the coolest 90-year-old secret agent in the world is still influencing advertising.

Being British, we are entranced by Bondage from an early age: the bubble-gum cards, Corgi Aston Martins, toy guns with silencers, play assassin's knives, sweet suicide pills etc. Even now, if I feel like upping my profile with the ladies, I can lather myself up in the shower with my Bond 007 luxury bath soap and 007 shaving foam, step into my James Bond jockey boxers or, if I'm feeling racy, my "Licensed to Thrill" BNWT men's Weenicons.

While performing my toilette, I would have a 007 Tocca scented candle on the go. But here's where it gets tricky. Bond's presence is profuse in the olfactory department - there is 007 aftershave, 007 colognes, 007 scents, James Bond eau de toilette and something called "Bond Girl", apparently impossible to resist, exclusively by Avon ... bugger, I'll splash 'em all on.

Hold up, there are still the cufflinks and watches to choose from ...

Hmmm, the bullet cufflinks with the 007 logo, I think, but the watch? Depends on what I want to do with it: laser someone, take a picture, do a bit of garroting or tell the time. I don't need to wake up to the Bond theme, so not the Melody Alarm Chrono James Bond Watch by Zeon. I think I'll wear one from the Swatch 007 Villain Collection to be sure I don't stick my ST Dupont Xtend 007 Torch Flame Lighter up the wrong guy's nostril.

Now a quick Finlandia Die Another Day vodka cocktail, not stirred in a special Quantum Of Solace Smirnoff Black limited-edition stainless steel cocktail shaker, followed by a bottle of James Bond edition 2002 Bollinger chased by a six-pack of Heineken, 007's preferred tipple at the moment. Then jump in my Aston, Jaguar, BMW or, more likely, Ford and drive at speed straight into a lorry of Perrier cans.

My secret MI6 connection is that I've designed the title sequences for the Bond films since GoldenEye. I didn't work on Quantum Of Solace, but I've just finished the titles for Skyfall, the new movie. Several times now I've also had to redesign the gun barrel logo - apparently, perhaps after only the cross, it's the most recognisable logo in the world. Hence the merchandising magic of 007: everyone knows him; the James Bond style is an instant shortcut to sensuality, humour, action, mystery and excitement.

Bond started as Ian Fleming's literary creation and has appeared in various guises from his first appearance on TV as "Card Sharp" Jimmy Bond, played by Barry Nelson, to young James Bond in the series written by Charlie Higson. The world now mainly associates him with the success of the Eon movie franchise, still going strong since 1962 while the emulators have come and gone: The Man From UNCLE, The Avengers, Our Man Flint, Danger Man - even Bourne is flagging. He has also been parodied, not only by others - Woody Allen's Casino Royale and Austin Powers, for instance - but by Eon itself: there is a great John Cleese Schweppes Tonic Water film that went out as an ad before the main Bond feature.

The most-loved homages - or rip-offs, depending on your point of view - are probably the TV ads. The Cadbury Milk Tray man was clearly a Bond double. A black-clad, secret-agent type of bloke dangling from a rope outside some Schloss in the Alps or a villa on Lake Como, using up CO2 in his helicopter so he can lower himself down the chimney instead of using the lift or stairs. Then, just as the chiffon-draped lady comes out of the khazi, he shoves his milk chocolates under a spotlight - not a good idea - and he's off out the window, diving 500 feet into shark-infested water. Why? "Just because the lady loves Milk Tray." Oh, and he leaves an enigmatic card, in case she thinks the chocs were compliments of the management.

The man with a mission to deliver mid-range confectionery is now a thing of the past, probably due to bloody political correctness - for some reason, some do-gooder thinks it inappropriate to have a black-clad man sneak into a woman's bedroom in the dead of night clutching his long, hard "gun". I blame the Government.

Barclaycard was probably the best mickey-take: in a long series of amusing ads, Rowan Atkinson played a buffoon Bond. I still think the one where, suspecting the ambassador's a double-agent, he strings him up and calls him "Mr Moley" is one of my favourite ads of all time. Directed by John Lloyd, it's a joy of timing, humour and character-acting. The agent became Johnny English, spawning two movies of his own, which endorsed Toshiba with the Toshiba-sponsored secret service - a kind of gag-on-a-gag.

Genuine Bond ads are sanctioned by Eon. I would imagine the "salutes to" quite often sail close to the wind of litigation, as even authorised versions have to tread lightly. Is that Daniel Craig in the poster advertising the new official fragrance? The imaginatively named "James Bond 007" aftershave is described as "a robust signature scent which embodies the duality of Bond; an opulent blend of sophistication and masculinity". It's a better tag-line than the 60s 007 scent: "007 gives any man the license to kill ... women."

The poster, although a collaboration between Procter & Gamble and Eon, still has to keep the model in the image silhouetted, presumably to be ambivalently Bond and not to compel Mr Craig to call his own not-so-secret agent. It looks classy - not so some of the unofficial ads.

Spoken by a Japanese Bond, "My name is Takei ... Hoshi Takei" prompts one to say Takei by name, Takei by nature. He's inexplicably starring in a Casino Royale-style Greek ad for Toyotomi air-conditioning units. It's so bizarre, it's almost good.

Some brands, it seems, are in 00- denial. I kept getting asked if I'd directed the amusing and stylish "feeling good" Virgin Atlantic ad. My much-missed recently departed director of photography friend Stephen Blackman shot it - he told me he and the guys from Traktor, who directed it (rather too well), had poured over and analysed my sequences. I sent a slightly indignant note to Tim Page, the head of production at Rainey Kelly Campbell Roalfe/Y&R: "Dear Tim, congratulations on winning gold at the Arrows with your Virgin ad. It was the first time I'd seen it - I must say I was rather taken aback that it copies verbatim my title work and you didn't feel like sending the script or concept to me." He replied: "Thank you for your kind words about receiving the awards for Virgin Atlantic. We're obviously delighted. However, I am a little surprised that you think we've copied your work and we do not accept that we have done so." 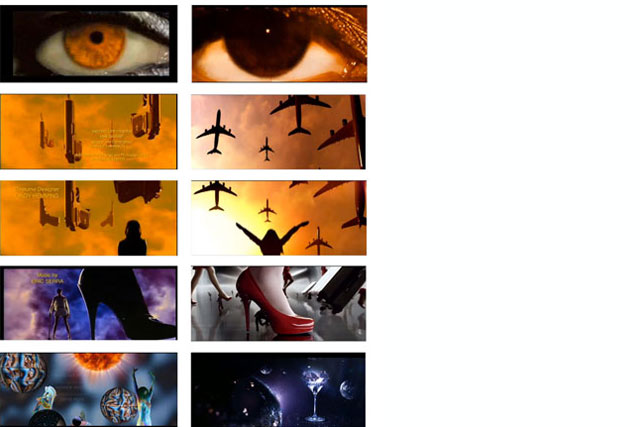 I think the "spectre" of a lawyer stroking a cat may have influenced his answer. I leave it to the reader to judge any similarities. As a pastiche, I'll take it as a homage to me, but I may switch allegiances - I'm a bit late for Pan Am; I think 007 now flies British Airways.

Frankly, I shouldn't take any credit for that genre of image - the mastery of Bond's style and its iconic nature was set way before I became involved. Maurice Binder and Robert Brownjohn created a visual language for the titles that is as instantly recognisable as it is ubiquitous. Ken Adam is probably the best art director who ever lived and, of course, the many talented directors of the films have built up a legacy of Christmas entertainment that will last into the next millennium.

But Bond does change. The music, stunts, plots and the visual language are all evolving to keep ahead of the competition. The trick is to do it while retaining a grip on the heritage that makes it so great. The franchise, steered and nurtured by the legendary Cubby Broccoli, is now expertly guided by Michael Wilson, Barbara Broccoli and Gregg Wilson. Why else, like an unflagging Duracell battery in a little Bond boat, would 007 still be breaking box-office records 50 years after Dr No and why would a myriad of manufacturers and advertisers still want to get on the Bondwagon?

I think I know why. I've seen a cut of Skyfall, directed with panache by Sam Mendes - Bond has done it again. It's superb entertainment. Em9#7.

Daniel Kleinman is a director at Rattling Stick