Brazil's spectacular exit from the Fifa World Cup 2014 last night attracted a peak audience for the BBC of 14 million, and generated a record number of tweets for a single sporting event.

The semi-final footballing showdown in host nation Brazil’s Estadio Mineirao stadium drew the viewing highs shortly after a meltdown by the home side resulted in them going four goals down in the first 29 minutes of the game. Germany went on to win the game 7-1.

Brazil’s biggest ever defeat drew an average audience of 13.3 million during the game, according to unofficial overnights.

The match also set a new record for Tweets Per Minute, with a peak of 580,166 TPM when Sami Khedira scored Germany's fifth goal. The previous #WorldCup TPM peak - 388,985 - came when Brazil knocked out Chile on penalties (28 June). 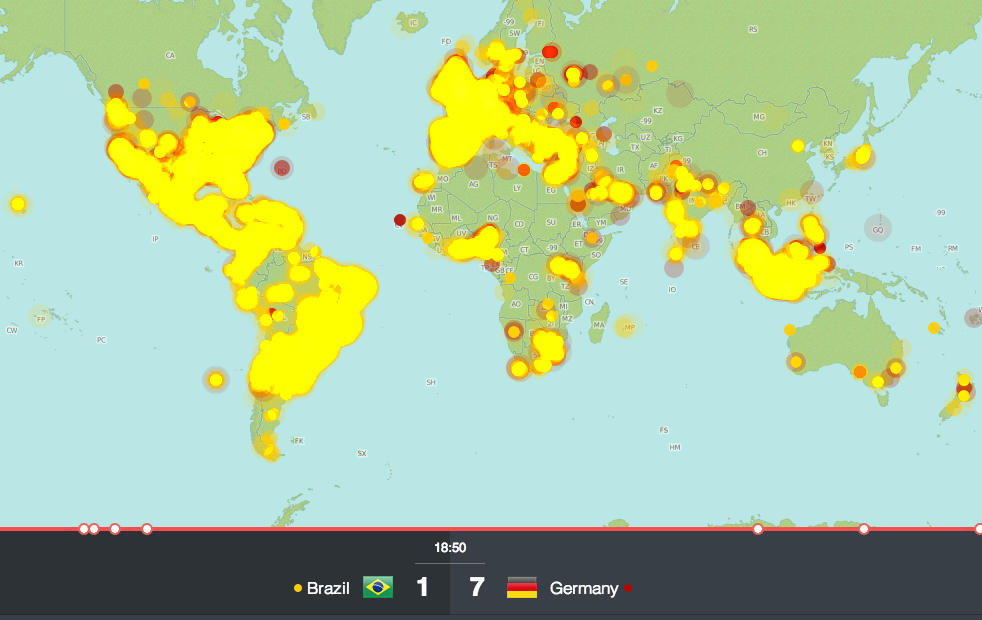 In the Brazilian squad, goalkeeper Julio Cesar drew the most tweets, followed by Oscar and striker Fred. - See more at: http://www.hollywoodreporter.com/news/world-cup-twitter-record-set-717371#sthash.5LcO2Y8i.dpuf

The group stages of the 2014 Fifa World Cup Brazil reached record numbers of viewers in some markets, including the UK – when a peak of 20 million (71% share) watched England versus Uruguay, the highest TV audience since the London 2012 Olympics.

Niclas Ericson, director of Fifa TV, said: "We believe the overall audience figures from the 2014 Fifa World Cup will show again that the World Cup is the most popular single-sporting event on the planet and that football is the world’s number one sport."

Commenting on what many consider to be a ‘coming of age’ performance by a passionate US side, knocked out in the final 16 by Belgium, Ericson said: "To see this overwhelming surge of interest in the United States is a true ‘watershed’ moment for the FIFA World Cup and for football. We have been thrilled to see the way the American fans are embracing the FIFA World Cup like never before."

The Fifa official added: "We have also seen some great numbers from Asia, Europe and other parts of the Americas, which gives us confidence that this World Cup will prove to be the most popular ever in terms of TV audiences."

As the World Cup shows, you don't have to root in the archives for TV gold