Lewis Silkin LLP partner Brinsley Dresden explains why brands should be careful of using nationalism to try to sell products.

"When two tribes go to war, a point is all that you can score." When Frankie wrote those lines on his way to Hollywood in 1984, he can’t have been thinking of the culture wars between Leavers and Remainers in post-Brexit Britain.

But there has certainly been a great deal of point scoring since the referendum in 2016. And now, as we move beyond Brexit, advertisers are struggling to express a view about our new role in the world.

Are we outward looking, global Britain? Not just an island, but much, much more than that, as Richard Ayoade declares on behalf of that exemplar of our colonial history, the Hong Kong and Shanghai Banking Corporation? Or are we just xenophobic, flag-waving jingoistic little Englanders?

In the immediate aftermath of the referendum, some Leavers took the opportunity to settle old scores in the culture wars. In Corfe Castle, there was pent-up resentment at the politically correct, metropolitan elite, waging their culture war against the casual racism of the 1950s. 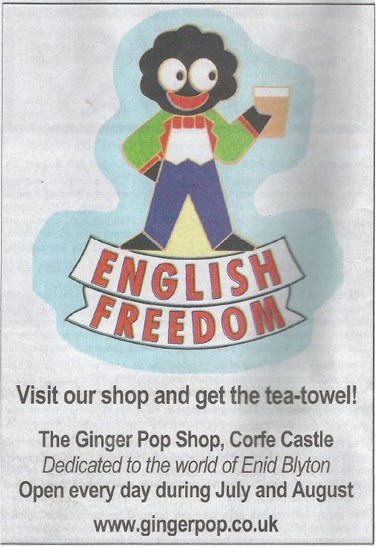 So, The Ginger Pop Shop, “Dedicated to the world of Enid Blyton” published an ad in the Purbeck Gazette with a picture of a golliwog holding a glass of ginger beer above the words “English Freedom”. How does a golliwog represent either the “English” or “Freedom”, other than by celebrating the freedom of the English to be racist?

Fortunately, at least two readers of the Purbeck Gazette can spot casual racism when they see it. They complained to the Advertising Standards Authority, which duly banned the ad, doubtless prompting wails of “political correctness gone mad” by Enid Blyton fans in Purbeck.

Of course, other global events have occurred since the referendum. In 2019, a year before the Covid-19 pandemic caused its fortunes to crash, British Airways celebrated its centenary with a TV ad replete with British stars of stage and screen, track and field. For decades, BA has wrapped its planes in the Union flag, as befits the national flag-carrying airline.

But in this ad, BA chose to embrace diversity, rather than nationalism, with a carefully curated cast chosen to ensure the representation of Great British diversity. A bit sentimental perhaps, but cheerfully inclusive and not even slightly jingoistic. 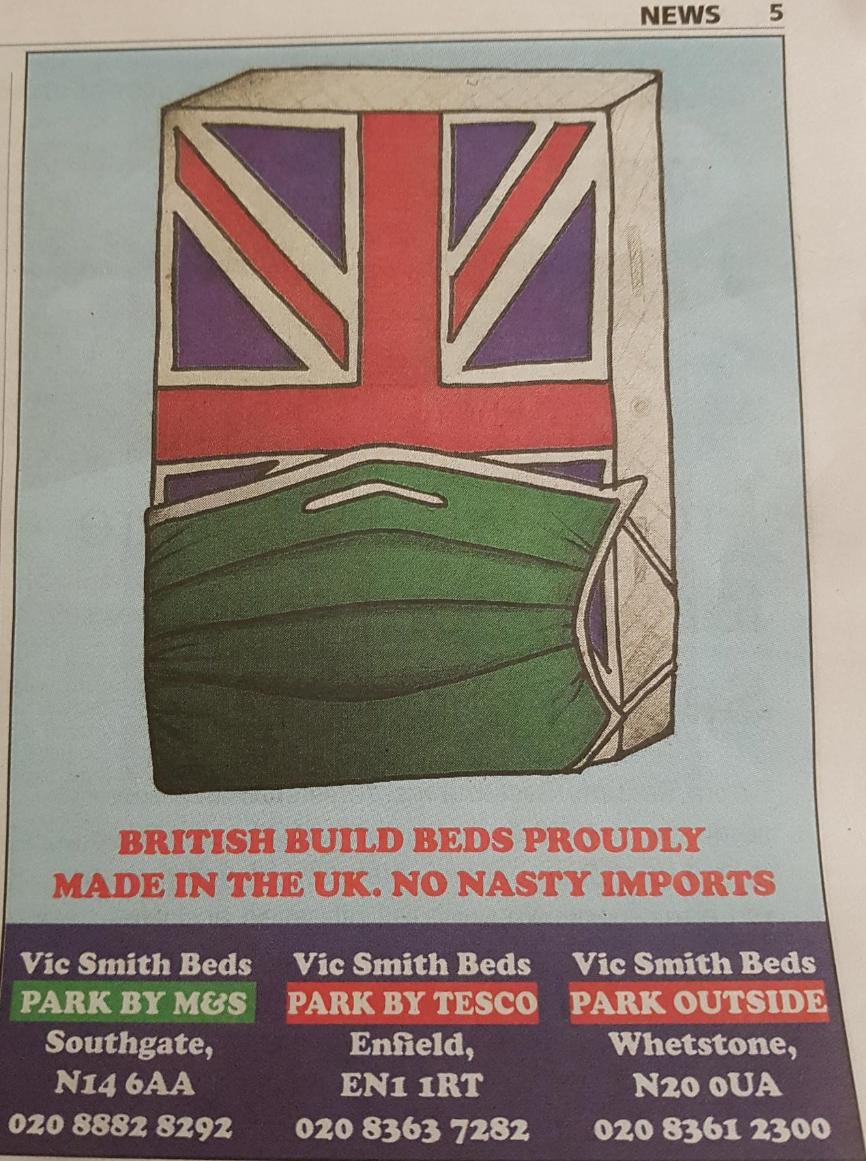 Unfortunately, a toxic combination of Covid and Brexit has led other advertisers down a different path. As early as February 2020, panic about Covid was spreading from Wuhan. Vic Smith Beds of Barnet, north London, was determined not to be caught napping and miss an opportunity to exploit the anti-Chinese rhetoric being stoked by President Trump.

Trump's propensity to call Covid “the Chinese disease” appears to have inspired the eponymous Mr Smith to publish an ad featuring a cartoon mattress with a Union Jack on the front, wearing a green surgical mask, and the words “British Build [sic] beds proudly made in the UK. No nasty imports”.

Despite being careless enough to publish an ad with a typo in the strapline, the advertiser apparently took care to “run the ad past its multicultural workforce, without any issues being raised”. Hardly the most rigorous focus group testing of all time.

It protested that “it was never its intention to be offensive or racist”.  However, by March 2020 when the adjudication was published, the ASA noted that British Asians were being physically and verbally abused because of their race in relation to fears about Covid. The ad was duly banned.

But it’s not just tiny advertisers like Vic Smith that are wrapping themselves up in the Union Jack, sometimes with tenuous connections to the UK. Earlier this April, the ASA gave Vauxhall the benefit of a very large amount of doubt when it chose not to uphold complaints about the claim “British Brand since 1903” in an ad for the Vauxhall Corsa.

It’s true that Vauxhall has been making cars in Britain since 1903, but the company was bought by American General Motors in the 1920s and subsequently passed to French and then Dutch ownership. The Corsa being advertised is built in Spain.

The claim may have been intended as a rallying call to “buy British” and help with the national process of “levelling-up” the red wall constituencies.

But if so, why not buy a Nissan, built in Sunderland by a Japanese company? When quintessentially British car brands like Rolls Royce, Bentley and Jaguar are owned by the Germans and the Indians, what does it even mean to be a “British brand”?

In our globalised economy, how many brands can truly claim to have any nationality? And if Brexit was about a transformation into global Britain, not nationalism, why the obsession with the Union Jack?

Brinsley Dresden is a partner at Lewis Silkin LLP

Is the ASA killing native advertising?

Ignore the Bribery Act hype and put your house in order

Close-Up: An appeal to the ad regulator's reason