The campaign aims to champion the choices people can make to live more sustainably.

British Gas is aiming to drive home the easy and mundane ways in which people can live more sustainably in its latest campaign, “This is what sustainability looks like”.

Created by Nucleus, the campaign includes a trio of 30-second TV spots, and will also run on billboards, video-on-demand and cinemas across the UK.

Easy achievable actions like plugging in a electric car, turning down the central heating and making sure the kettle isn't overfilled when making only one cup of tea feature in the campaign. The simplicity comes about as a result of British Gas’s research, which found that 38% of British people were unsure how to begin their carbon neutral journey.

Andy Freeman, marketing director at British Gas, said: “We’re delighted to launch a campaign that doesn’t just talk about sustainability as a topic for future years, but showcases the real and practical solutions we offer, to make a real difference, starting today – not tomorrow.”

The campaign was created by Matt Wood and Tom Loveless, with the TV ads directed by Aaron Stoller through Biscuit Filmworks. Nucleus is also the media agency.

For the out-of-home component, oversized posters will use air cleaning technology to purify the atmosphere around them – one poster, British Gas claimed, will remove pollution from 524 cars per day – and even be used to power people’s homes once discarded. 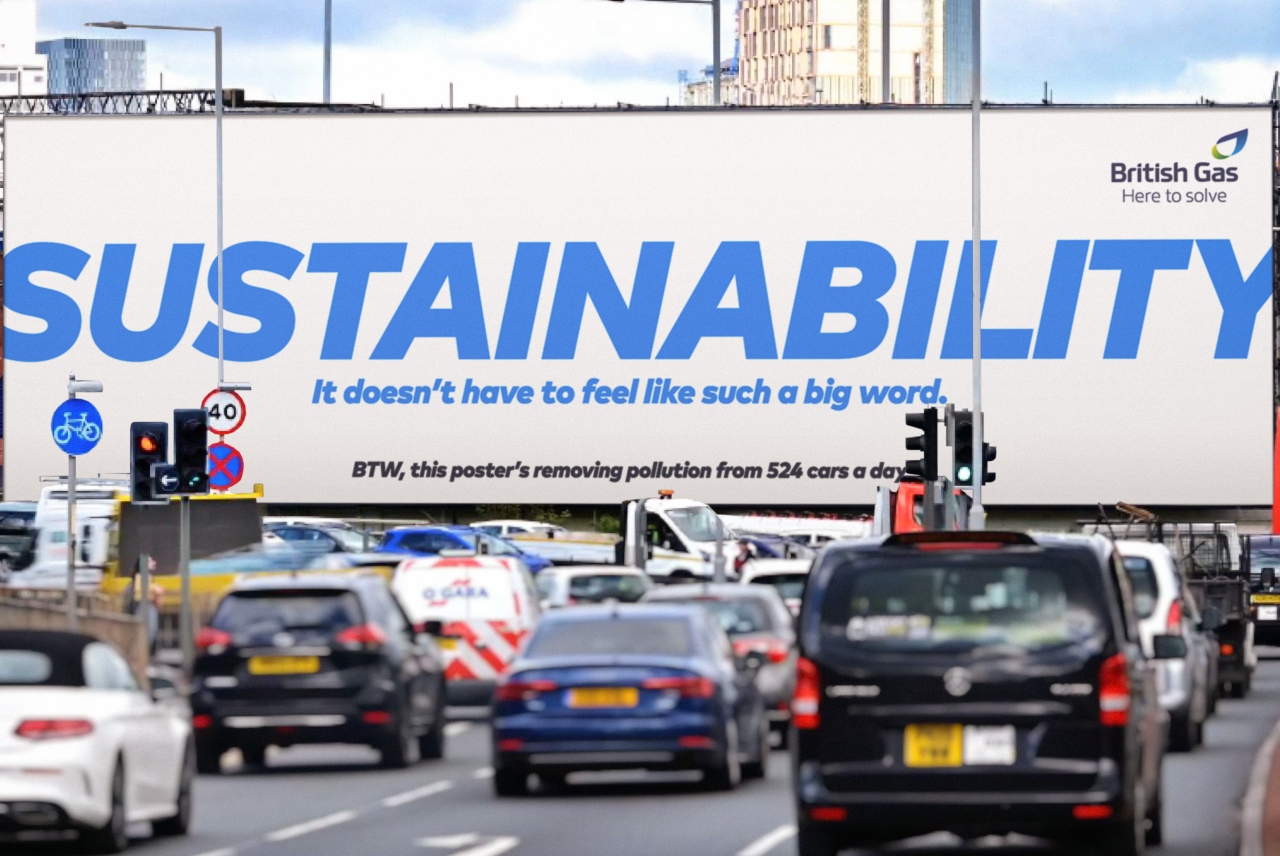 This is the second campaign from Nucleus, the bespoke agency created by WPP to serve British Gas owner Centrica. Nucleus’ debut campaign for British Gas, “Here to solve”, aimed to persuade people to see the brand as more than an energy supplier.

Micky Tudor, executive creative director at The & Partnership, one of the agencies involved in Nucleus, added: “We wanted work that was the opposite of most sustainability campaigns. No swaying trees or fields of green. No kids looking hopefully into the distance at a brighter future. No greenwashing. Just saying it like it is. Keeping it simple and showing the real things that we are actually doing right now to help people and the planet be more sustainable. The resulting campaign’s power is in its brutal simplicity and confidence.”