Brothers Cider is set to launch a digital campaign to support its point of sale activity for its seasonal Toffee Apple cider brand later this month.

The digital campaign by creative and design agencies Xcetra Media and Skonka plays on Toffee Apple's winter association and will run parallel to trade activity and bespoke point-of-sale promotions.

Glastonbury-based Skonka devised the copy for the campaign, including the tagline "Odd how you can get a taste for winter", while Xcetra Media designed and developed the activity, which will go live on 21 November.

The campaign will ask people to upload photographs of certain items, such as bespoke point-of-sale stands or toffee apple-related items such as draught syrup and bottles of Brothers Toffee Apple Cider, to the Brothers Facebook page.

The "taste for winter" activity follows Brothers Cider's Every Family Has its Rebel online game, which was played by 15,360 people between 28 October and 6 November.

Every Family Has its Rebel positions the Toffee Apple brand as the "rebel" of the Brothers range and asked people to enter their details to receive a series of jokes or other rewards.

Brothers Cider has bumped up its marketing activity this year and earlier this summer launched a TV ad as part of a £5m investment in the brand which a spokesman claimed delivered its biggest ever month of sales in August 2011. 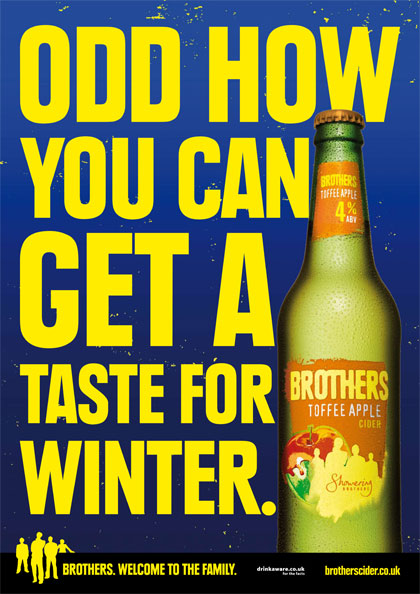