Seated in my art-gallery office in beautiful Exmoor, with the bluebells up my hill just starting to fade in our ancient oak wood, it is hard to believe that I am still at the front line of the revolution sweeping through adland.

Not just because of the wonders of Zoom, but because of the way in which, with the help of the likes of Campaign (well, there is no comparator to Campaign, the magazine I helped to launch 52 years ago!), I have listened in and watched how adland is changing itself.

I still have a toe in the waters with my Ideas Clinic, which helps to reboot brands in two days. And my idea is, happily, hugely relevant for the post-coronavirus world, where some of the lavish behaviours of the past are unaffordable.

But my observations are less about my own toe and more about the foot, the leg and, indeed, the entire body of adland and how it is having to reinvent itself.

My own battle cry of "Every problem is an opportunity in disguise" is proving to be true.

It is, of course, sad that so many are furloughed – and many will eventually lose their jobs.

It was equally sad when miners and steel workers lost their jobs in the north east. New jobs did spring up in thriving – at least they were – car factories, call centres and cultural centres. Clichés about eggs and omelettes abound but are true.

I thought that the changes that had transformed adland in the last half-century of my "first advertising career" were huge enough.

When WCRS was founded in 1979, we had no computers, no mobile phones, no social media. The media landscape was just populated by three TV channels – BBC One, BBC Two and ITV – not the 480 we have today (Channel 4 didn’t start until 1982). In print media, many national newspapers had seven-figure daily circulations, rather than six figures, as they do now.

Yet all these huge changes will have less impact on our industry than those that we are living through right now.

How we work will be changed forever, even after the blessed relief of a vaccination against Covid-19 emerges.

The "tele-working" that never really caught on has now caught on. It is 25 years since the maxim of "work is something you do, not something you travel to" was coined. But it has taken coronavirus – and technologies of the likes of Zoom – to impose that on a working population.

And it has been welcomed more than most expected.

If you follow the excellent Campaign US series that has Zoom conversations with agency and client luminaries, you get a sense of one part of our future.

Seeing people in their own homes – with pets and kids in unscripted walk-on parts – humanises our business relationships.

And people like working at home. As one creative chief from McCann in New York said: "I always thought this [his home] was going to be a nice retirement location. Now it’s my office."

Interesting snippets of information arrive in the much more informal Zoom conversations.

One I particularly remember from the Campaign Zoom series is how millions of people are happily "virtual dating" on OK Cupid – using their imagination and their bodies in new ways.

The real revolution is not how we will do things, but what we will actually do.

Advertising copywriting was my first business line. But from now on, the word "advertising" is increasingly redundant. The bandwidth of what is now needed is demonstrated by some of the new campaigns that stand above the "feel-good factor" that too many have produced – particularly in the US, if not here.

And the first of these "best in class" is BT – although not quite for the reasons you might expect.

BT has reinvented itself in many ways since it was first privatised in 1984 (I was part of the BT2 privatisation in 1991 with an Inspector Morse pastiche, so I take a special interest in the brand).

Before it was privatised, it took six months to get a new BT phone line into a new business – so that is why WCRS had to start in a flat in Grosvenor House, just in order to get a telephone line in 1979.

But the really important line to BT was David Abbott’s "It’s good to talk", along with the help of Maureen Lipman’s "ology".

Abbott's genius was to convert the mouth-filling complexity of the proposition invented by BT consultants, "reciprocated confidences", into four magical words that said everything: "It’s good to talk."

Nothing quite matched that campaign as BT tried to broaden its own bandwidth to embrace computer screens and TV screens.

Yet the skill of Abbott Mead Vickers BBDO – only recently displaced as the UK’s leading ad agency – kept BT as a client for 27 years.

A recent change at the top of BT led to the inevitable pitch, where Saatchi & Saatchi managed to steal AMV’s longest-standing client.

And the reason, explained by BT’s Pete Jeavons, is: "We were looking for an idea that was much bigger than just a brand comms campaign – an idea that lived and breathed within the business and changed how 110,000 people thought about the brand."

Saatchi & Saatchi's battle cry of "Beyond limits" would probably have had the great Abbott turning in his grave. And it certainly falls short of another battle cry that transformed the sector back in 1994: "The future’s bright, the future’s Orange" (still the ninth-best-recalled slogan in the UK, even though it hasn’t been used for 20 years).

But this new campaign has been given a new energy by the circumstances of the coronavirus pandemic – and Saatchi & Saatchi's swift response.

In October 2019, Saatchi & Saatchi and BT unveiled a fairly traditional "blockbuster" featuring a 12-year-old girl spouting Charles Dickens as she walked into a school to declare: "We have everything before us."

This was supporting the BT message that "we’re giving 5,000 kids the tech skills they need".

So far, so predictable.

Then coronavirus came to sweep all this polished mediocrity away.

Full marks to Saatchi & Saatchi and BT for acting so swiftly and decisively. Now compare the flummery of the "biggest BT campaign for 20 years" with the helpful reality of Clare Balding spending three minutes teaching us all how to use WhatsApp.

Yes, our communications must be entertaining and engaging, but post-coronavirus they must above all be useful.

Note, too, that this communication is a partnership with ITV and one of a series of "Daily top tips on tech".

There are 10 of these "advertorials" – a word not normally held in high regard in advertising circles. But here is an advertorial making "old-fashioned advertising" look over-polished and irrelevant.

What was the production cost of the 10 BT/ITV advertorials? Probably a lot less than the over-artful blockbuster of last October – which now seems a century ago.

This is a conventional commercial telling us how a BT video call keeps Balding in touch with her mother as part of the "BT. We help you be there" campaign.

Coronavirus has suddenly presented an opportunity for the same talent deliver an entirely convincing message – albeit in three minutes, not 20 seconds.

This suggests that it is also time for media agencies to reinvent themselves and recognise that the 30-second cost-per-thousand matrix is no longer the right ruler to measure campaigns by.

I only need to see Balding once talking about WhatsApp to feel grateful to BT for guiding a 75-year-old like me through the new comms technology. Particularly impressive as WhatsApp is a competitor to BT, since its communications service is free.

For a brand that had the second-worst customer service – only behind TalkTalk – to make me feel grateful about BT is a considerable achievement. We see here the coronavirus boost – from hateful to grateful.

If you place this BT/ITV partnership alongside the plethora of Covid-19 advertising, you can see its freshness and standout quality.

If you haven’t looked at the edit of Covid-19 advertising, please have a look at it.

As this embarrassing sequence of visual and musical clichés demonstrates: every Covid-19 commercial is exactly the same. 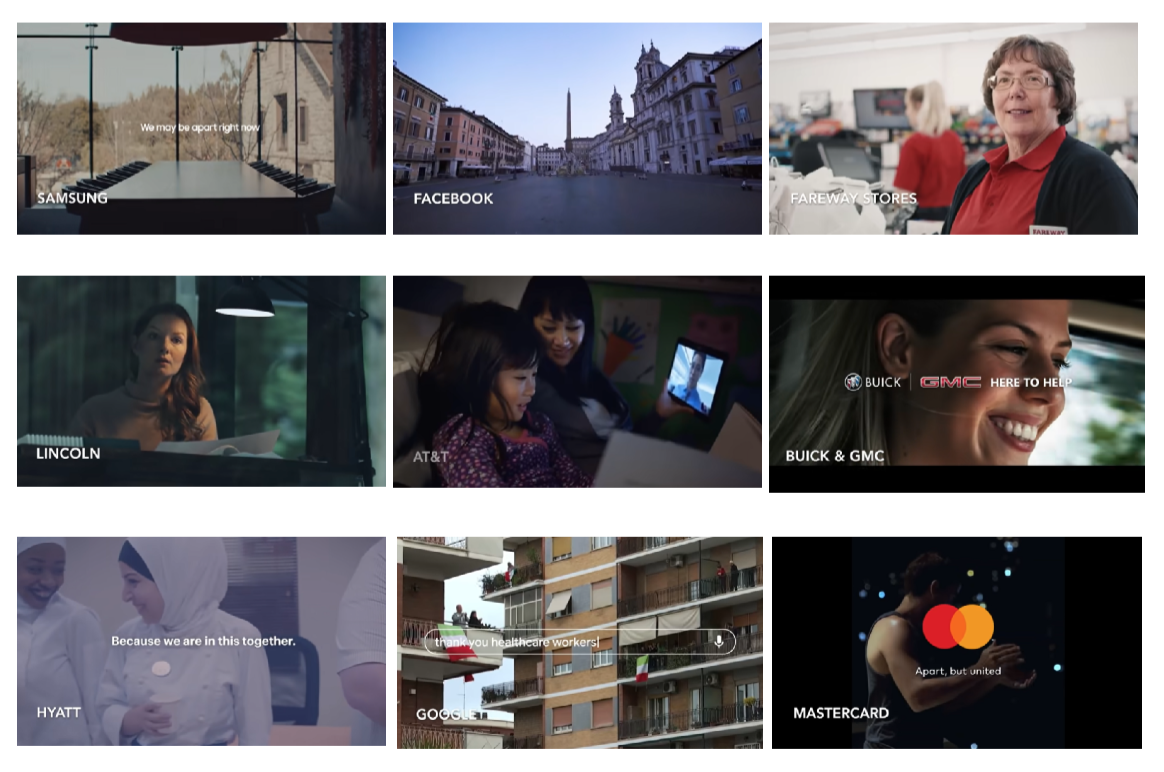 It’s an embarrassment to the communication industry.

Whereas the BT/ITV one makes me feel proud of what our industry can do at its best - it shows that suddenly advertising has a serious role to play – beyond hustling goods and services.

In Finland, social media influencers are classified as key workers.

In Britain? In Britain, if we see more of this BT/ITV approach, maybe we in advertising will cease to be ranked as one of the least respected professions.

Advertising that is full of hope, not just hype.

If we want to see how the world is already changing, have a look at the second "best in class" communications programme that I will identify.

This is the Uncommon Creative Studio campaign for ITV to encourage Britain to "get talking" about mental wellness – as it was in its origin.

Notice here the fusion of programme with advertising. It was launched in October 2019 during the final of Britain’s Got Talent.

Here, Ant & Dec paused the proceedings to talk about mental wellness and encouraged all of us to do the same (something that, as someone with a bipolar diagnosis, I particularly applaud).

All this was excellent and was shaped by a new agency with a new approach. As it proclaims, "Uncommon is a creative studio building brands that people in the real world actually wished existed".

And as it has delivered against this, no wonder Campaign voted it Independent Agency of the Year (and, like many of the best start-ups of recent years, such as VCCP and Adam & Eve, I am proud to say they have WCRS alumni among their founders).

Uncommon’s founding partner, Natalie Graeme, described the opportunity that we now all have: "We can rethink and change before we have the chance to slip back into old ways." (And, no, I don’t have any shares in the agency I am hyping for the model of the future.)

When coronavirus arrived, ITV and Uncommon didn’t need to throw away – as BT had to – their overblown blockbuster. They already had a structure that could quickly embrace coronavirus. It swiftly evolved.

The first spot received an "intense" emotional reaction from more than 40% of the British public, placing it ahead of recent ads from 16 leading brands, including Vodafone, McDonald's and Tesco.

Will BT’s Clare Balding film or ITV’s "Get Britain talking" trouble the awards juries of the D&AD and Cannes? Hopefully. But very probably not.

The truth is Cannes and even D&AD are going to have to reinvent themselves if they are to be a meaningful measure of creative achievement in the post-coronavirus world. "PC" now stands for something more relevant than political correctness.

This is not, of course, just about change in the "comms world" – my own somewhat ineffective replacement for adland.

If we look at that centre of creativity, business start-ups, we can see they are innovating even more furiously than our industry. Their survival is even more rapidly at stake than our own.

Some examples. ChargedUp – which used to rent out portable phone chargers from kiosks – has now reinvented itself as a hand sanitiser dispenser station. WhatWeWant was a private crowdfunding service enabling families and friends to club together to buy gifts. Then coronavirus killed gift-giving, so it reinvented its technology to let charities use the platform to raise money – and very successfully.

There are many other businesses reinventing themselves to survive in the post-coronavirus world. The big question is whether our industry (whatever we now call it) will successfully reinvent itself.

The answer is simple. Those businesses that succeed will. Those that fail won’t.

Robin Wight is a founder of WCRS

Brands that embraced Ramadan during lockdown