Budweiser has created a beer cup that lights up to the sound of cheering fans as part of the activation for its sponsorship of this summer's Fifa World Cup in Russia.

The campaign, "Light up the World Cup", includes a 90-second film created by Anomaly, set to run in more than 50 countries across TV and digital video.

There are also 15- and 30-second versions of the film, which depicts a series of drones carrying bottles of Bud – the official beer of the tournament – to the Luzhniki Stadium in Moscow. 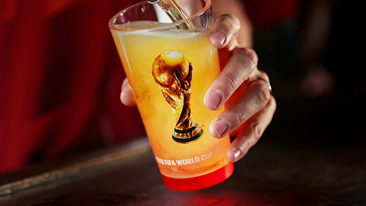 Alongside this, the brand is distributing eight million Budweiser red light cups, which contain audio detectors and LED lights that glow brighter when the sound level increases.

"Everybody looks forward to the World Cup like an epic school holiday that only comes round once every four years," Parker said. "There’s a feeling in their air, a sense of liberation, euphoria."

The role of sponsors, he said, was to "to make an event like this more fun, more celebratory, more social."

The year’s tournament has been somewhat overshadowed by worsening relations between Russia and western countries – especially since the poisoning of Sergei Skripal and his daughter Yulia in Salisbury in March.

Russian president Vladimir Putin was re-elected the same month in an election condemned by international observers.

But asked how the challenging political context had impacted the company’s plans for marketing around the World Cup, AB InBev chief marketing officer Miguel Patricio –  also on the call – said it was not a consideration.

"We’ve been sponsoring the World Cup for a long time," he said. "This is not a political moment – it’s an amazing moment that reunites the world around football."

How brands are hoping to score for this year's World Cup

A view from Dave Trott: The Budweiser principle