BT has had mixed success with its campaign featuring the supposedly hapless agency types behind its ads.

So thank God for Ryan Reynolds, who appears in the latest spot doing a great send-up of his character in Deadpool. Predictably, his (mostly female) fans have enjoyed the performance.

I have finally found something good about @bt_uk. They now have Ryan Reynolds in their advert!
@TimBevans

Just seen Ryan Reynolds in an advert, I usually moan when I see a celebrity doing an advert but I’m defiantly not complaining seeing him
@GlitterFiona76 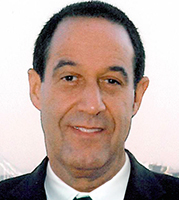 Stan Myerson, outgoing joint managing director, Northern & Shell
It’s the end of an era as Richard Desmond’s right-hand man is retiring from the publisher of the Daily Express and Daily Star. Stan Myerson, who turned 65 in March, only began working with Desmond after the mogul bought the Express titles in 2000 but went on to become his boss’ most trusted executive and ‘brother-in-arms’. He also knew how to smooth over problems when Desmond occasionally caused trouble with his outspoken views. The South African leaves after receiving a £4 million windfall from Northern & Shell’s sale of Channel 5 in 2014.

Ryan Reynolds to front BT's latest 'behind the scenes' ad