What are the ingredients that make an advertising or marketing agency one of the best places in which to work?

Is it the flexible working hours and the private healthcare? Maybe it’s the profit-sharing scheme? And what about the early finish on Fridays and the staff awaydays in exotic locations? Or the ban on weekend working? Or the help in moving house? Or the free pizzas when you work late?

You’ll find all these perks on offer from agencies taking the top honours in Campaign’s second annual Best Places to Work survey in partnership with leading talent and training provider The Industry Club (see below for the Top 50 list).

Yet there’s a compelling argument to be made that the best places in which to work are not hard to spot because they select themselves.

"Usually the best places to work are simply the most successful," the former chairman of a high-ranking UK agency declares. "They may not always be the most conventionally HR-focused. But success in pitches and an enviable reputation usually reflect the high quality of people, motivation, energy and team coherence that make work rewarding."

That said, it’s equally true that the priorities of those working in the industry have changed hugely in recent years. Indeed, a survey by Nabs among 750 of them found that 95% regarded good wellbeing as essential for a successful and fulfilling career. According to Diana Tickell, Nabs’ chief executive, wellbeing has come to mean much more than gym memberships, free breakfasts and yoga sessions.

"There has been a paradigm shift over recent years," she says. "From a time when the industry was driven by tough pitch deadlines, presenteeism and a ‘work hard, play hard’ culture, it is now one where both employers and employees are starting to value and understand the benefits of flexibility, trust and autonomy."

Feedback to Nabs also suggests agency staff are looking beyond the material reward of a good salary and want to work with companies whose values align with their own. Moreover, research indicates that companies who get their wellbeing offerings right benefit from improved staff morale, fewer illness absences and improved productivity.

Nevertheless, creating better employee wellbeing remains a work in progress. A 2017 joint survey by Nabs and Mind found that 46% of staff wouldn’t feel comfortable taking to their line manager if work was affecting their mental health.

Tickell, though, points to growing evidence that more companies are promoting open and inclusive workplaces where staff are encouraged to speak up and take time for themselves when their wellbeing isn’t at its peak. "We believe the future is looking bright for adland." 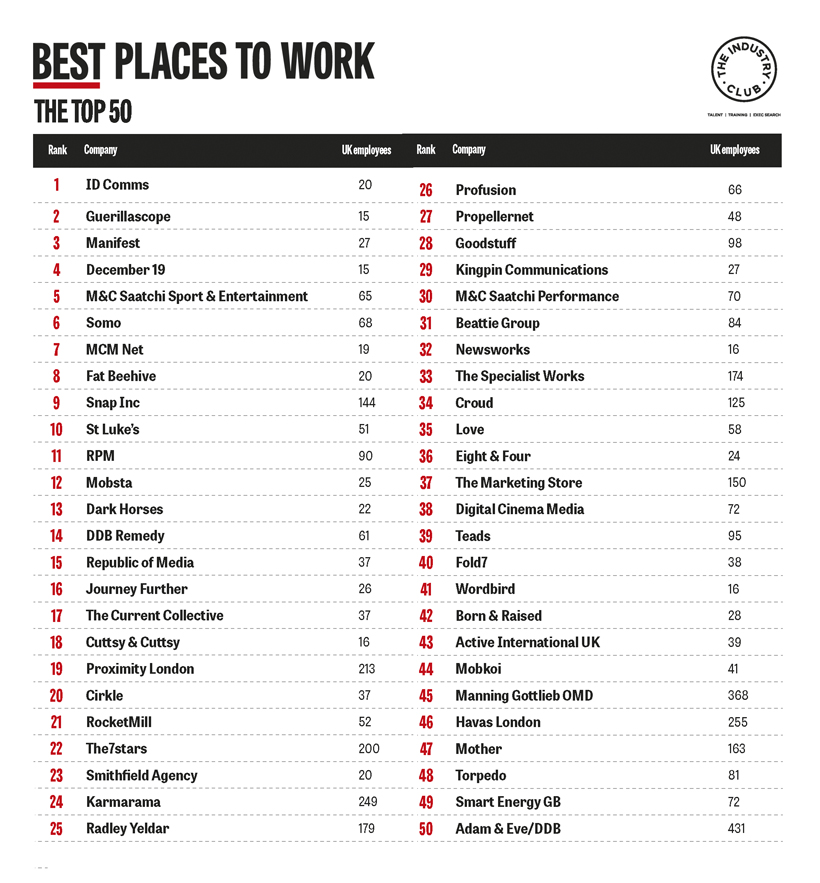 Campaign’s Best Places to Work celebrates the employers that have proven they know what it takes to create environments where people love to come to work. The programme is open to all publicly or privately held organisations within the ad agency, ad tech, media and marketing industries. To be eligible for consideration, organisations must have at least 15 employees working in the UK.

One-quarter of each organisation’s score consisted of the BCG Employer Questionnaire, used to collect information about each employer’s benefits, policies, practices and other general information. The rest of the assessment involved the confidential 78 question Employee Engagement & Satisfaction Survey, which was used to evaluate the employees’ workplace experience and culture.

The combined data allowed the experts at BCG to conduct an in-depth analysis of the strengths and challenges that exist in each organisation. BCG’s workplace assessment experts determined who was good enough to make the list and then ranked those winners in the different size categories.

For more info or email Katrina Heimbach at kheimbach@bestcompaniesgroup.com.

Now on to some of the more dubious office practices…

Agencies like to boast about how well they nurture and motivate their people. But there’s plenty of anecdotal evidence to suggest that boorish and insensitive behaviour towards staff – much of it provoked by cost-cutting and work overload – is still commonplace.

Thankfully, stories of ritual humiliation – such as the agency Christmas party at which new employees were required to walk through a giant vagina to celebrate their "rebirth" – are rare.

Other old industry habits still die hard though. Campaign has unveiled many stories that suggest sweatshop environments, unresponsive managements, poor financial rewards and little regard for work/life balance are not things of the past.

Meanwhile, a lot of agencies are still talking the talk rather than walking the walk when it comes to sexual equality.

Belinda Kent Lemon is an outplacement and talent management expert who works with many leading agencies. She says: "The most common thing I’ve seen, over and over again, is women having IVF treatment or being pregnant just happening to be put on the redundancy list."

The agency founder who insisted on sending a company car down to the West Country to pick up his Christmas turkey and deliver it to his central London home.

A secretary having to organise her boss’ holiday let alongside her day job.

An agency contact being called in to defuse a client’s tense situation with their paid sex worker during a shoot.

An employee forced to go to her creative leader’s house in the middle of the night and retrieve a bag he had accidentally stolen from a rival agency chief at an industry event.

Executives spending thousands of pounds to decorate their offices despite dwindling agency resources.

A boss forcing his staff to stay out late at an event because clients are still there, despite the employees in question being on a conference call at 8am the next morning.

An account handler having to listen to their client boast about his sexual exploits with his wife.

The agency boss who used to listen to Madonna and dance around the room before any big meetings. His PA would never let anyone interrupt him while he was getting in the zone.

The PA who would go above and beyond to make her boss happy by bringing in chocolates, cake, buttered toast etc. In reality she hated him and was trying to give him a heart attack.

The chief commercial officer who had to depart a meeting speedily as he realised he’d left his girlfriend locked up in his wardrobe at home.

One senior agency executive used to sleep on an inflatable sofa in the disabled toilets at his agency after midweek clubbing. His assistant would wake him if he needed to make a meeting. One day she knocked on the door, shouting "wake up, wake up", but he wasn’t in there. Instead, the agency chairman emerged furious.

One agency built an extension on the roof of its building. Not only could residents in the Georgian townhouses across the road see what was going on all day, but all night too. Friday nights back at the agency after the pub shenannigans were filmed by the residents across the road and sent to the managing director with the threat of getting the police involved if the agency didn’t agree to a 9pm balcony curfew.

Turn down the nihilism