When James Brown combined comedy, clubs, football and drugs into 'Arena edited by Hunter S Thompson', the lads' mag was born - and went on to define an era of irreverence and excess.

Loaded came about after I was interviewed for the NME editor’s job, during which they asked if I would like to start my own magazine.

As word leaked that IPC was attempting to launch a British men’s lifestyle magazine, the media industry queued up to laugh and trot out the historic misconception that men wouldn't read magazines like women did. I thought they would.

I was intent on creating a very different magazine from the upmarket fashion-advertiser-orientated American titles, which existed in the UK but had no connection to my life. I wanted a title that featured comedy, clubs, football and drugs.

The first pitch doc I wrote said "Arena edited by Hunter S Thompson" and "cover stars that are dangerous and up-and-coming or knackered and past it with great stories to tell". I wanted to create "generational tension".

Unlike The Face and Blitz, I wanted the magazine to be of the audience rather than positioning itself as better or more hip than it. As the team came together and breathed life into the project, we filled it with epic alcohol tales, nightclubbing excesses, having a great time all the time and lots of football and biscuits.

My deputy, Tim [Southwell], and I were in Barcelona watching Leeds United beat Stuttgart when I said: "This is what our mag should feel like." We wanted it to have a true sense of euphoria. 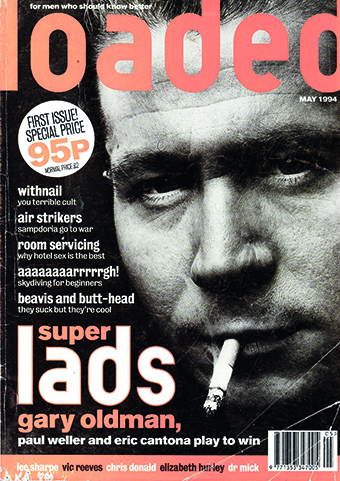 My boss, Alan Lewis, suggested we put girls and fashion in for commercial purposes. Three weeks after the first issue (pictured, right) – with Gary Oldman and a neon-orange, lower-case logo on the cover – had hit the shelves, selling more than 70,000 copies, the posties dumped a huge sack in the office.

There were more than 400 letters and postcards: it was fan mail. The audience had never had anything like it. The first five covers were Oldman, Leslie Nielsen from Naked Gun, Elle Macpherson, Paul Usher (Barry Grant) and Anna Friel from Brookside and Prince Naseem Hamed.

Loaded made its first profit after three issues against a target of three years. After issue five, an ad exec in Campaign’s "Guilty Pleasures" said: "I love it because it reflects how I am rather than how I’m supposed to be."

A sense of humour, self-deprecation and reader inclusion drove Loaded on to win all the available awards and achieve market leadership and infamy within a year.

No-one from IPC came near us and I was free to do whatever we wanted – my favourite was probably inventing the "Crisps World Cup", followed by "Vodka…", "Breakfast Cereals…" and so on. Tim coined the phrase "Drop Your Bacon Sandwich" and the line "Good Work Fella" for a column title. They entered the national language. We had so much fun it began to hurt.

By the time I left three years later for pastures better paid, we were sailing past sales of a third of a million. My Loaded was a very different beast to the siliconed babefest it became in later life. The writers were a mix of new talent, such as Martin Deeson, Bill Borrows and Michael Holden, and contributors included Howard Marks, Irvine Welsh, Jon Ronson, Barbara Ellen and Dennis Hopper.

We had so much fun it began to hurt

Female cover stars were the likes of Kylie or Uma Thurman; and the two times we featured Page Three girls we put clothes ON them.

Loaded was essentially a men’s fanzine. It was very positive and rarely slagged anything off. Importantly, readers felt a part of it. It was a godsend for both IPC and the commercial industries too.

Per Neuman, the boss of Estée Lauder, later said: "Loaded was the first time we were able to find a lot of young men to advertise to in one place." Although had they sent any of their product to the office at the time, someone would have probably tried to drink it.

James Brown was the launch editor of Loaded; his book about the magazine will be published in spring 2020

My campaign: A chance viewing that kick-started Jeremy Bullmore's life in advertising

My campaign: The noisy beginnings of BMP in 1968

My campaign: Mark Read on the launch of WPP's Stream in 2007