The baffling bit was the fuss. Questions in Parliament, government furore, headlines all over the world. All because of a bemused-looking pregnant guy, staring out of a Health Education Council poster inviting young men to "be more careful".

The pill was new then, and people generally were being too casual about sex. The message the Health Education Council wanted to get across to young guys was you’ve got to be more careful in your sex relations.

Everyone at Cramer Saatchi was trying desperately to get a cool idea, something that would hit home. I got a call at my photography studio from Ross [Cramer] and he said you’ve got to get down here.

They held up this picture of a bloke with a pregnant tummy and I said yeah, good gag. They said no, it’s for real. I said it will never get passed, but they told me it already had.

Well, I couldn’t believe it because I knew this ad was going to hit D&AD big time. That was important to us, because we were at the early stages of our careers. This would make us famous if it got through. The deadline for D&AD was 31 January and, with four days to go until Christmas, everyone was pissed out of their brains.

It would be a sympathetic expression because it’s never happened – blokes don’t get pregnant too often. So, how would a bloke feel? Sheepish, a bit stupid? What the hell have I done?

The pregnant pad was easy but we had to cast the picture – the bloke for this shot had to be carefully chosen. It had to be the right kind of face.

The actual shot needed to be very simple. It didn’t call for any weird dramatic lighting; it was all down to this guy’s expression. If that was wrong, it would kill the idea completely.

It would be a sympathetic expression because it’s never happened – blokes don’t get pregnant too often. So, how would a bloke feel? Sheepish, a bit stupid? What the hell have I done? He’s facing all that pain and agony, and it shouldn’t have happened. All that has to come across in one shot, one expression. And that was my responsibility.

We went through more than 50 people, trying some off the street and going around the main stations at rush hour. One of the people we tried was John Hegarty. He knew exactly what we wanted but he couldn’t make that expression – it’s so delicate and subtle. We knew when it wasn’t right. 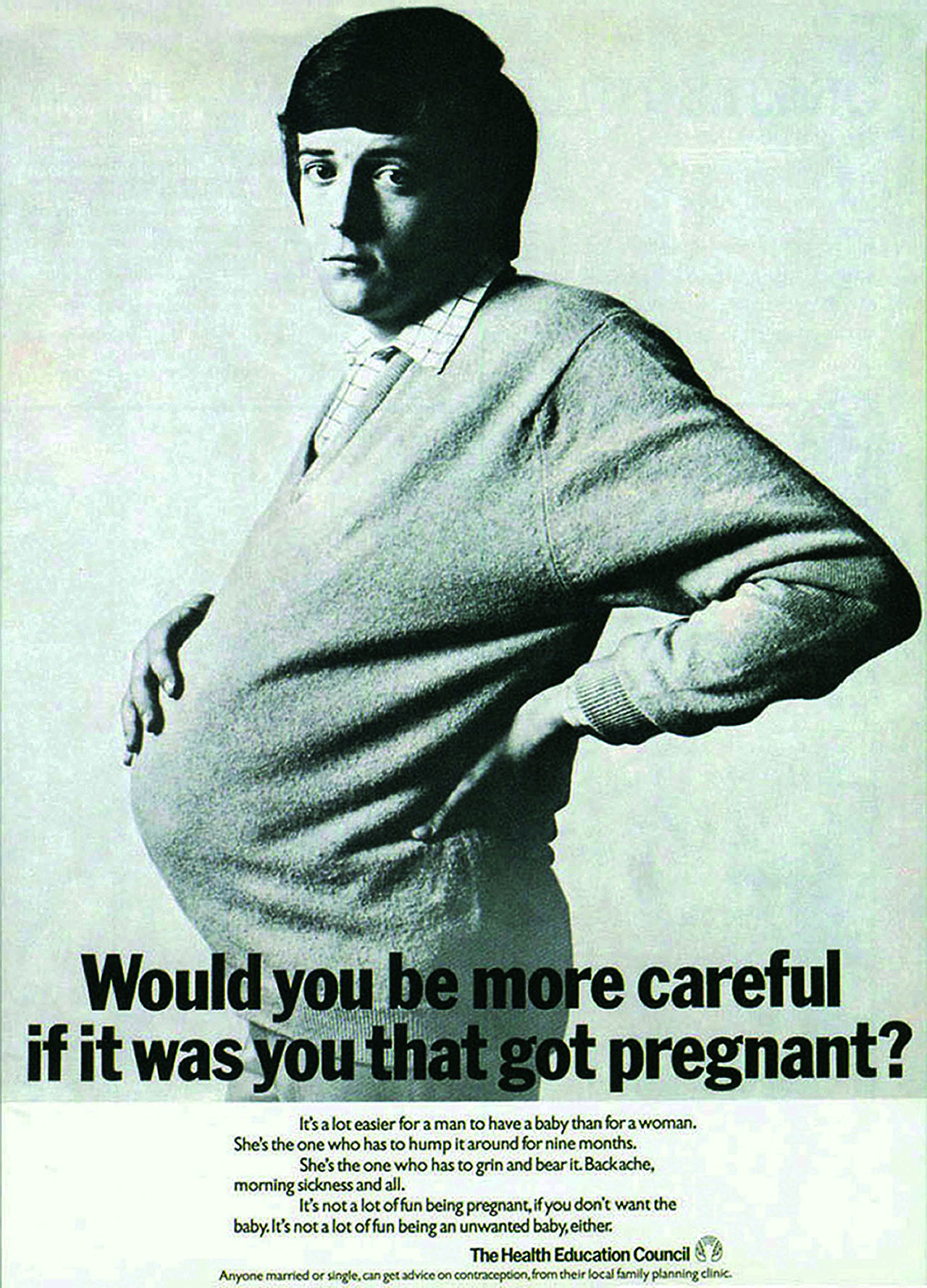 Then I got a call from the girl I’d used for casting. She found him in the production department of BBDO. He was a young guy who was totally bemused by the whole thing, and he didn’t understand what the hell we were doing. He came up with just the right expression.

He said to me, I’ve got a problem with this because my mum’s a devout Roman Catholic, so can you keep my name secret? I promised him that I would but sadly, of course, there were other people involved.

I reckon it was Charlie [Saatchi] who printed and put up the first posters in public loos, to show D&AD that it had been published by the deadline. He was very canny, that man. As soon as the poster was printed, I was besieged with press. I had to stay away from my studio.

The ad made headlines all over the world when it came out. It was such a bombshell, one of the most controversial ads ever. There were questions in Parliament about the propriety of running such an ad, especially in the government’s name. It made a furore all around advertising and beyond, all over the world.

The client was delighted, even more so after it had made such a fuss, because that put it on the map. I hope it did some good. It’s weird to me that it’s made such an impact and still makes an impact. Because in photographic terms, what is it? A picture of a bloke. I find it pretty baffling really.

Alan Brooking was the photographer of "Pregnant man"

My campaign: Pitching for New Labour's New Deal in 1997

My campaign: Tess Alps on going from gamekeeper to poacher in 1992

My campaign: Lessons from HAT's archive, 1968

My campaign: Polaroid's home truths and the birth of Don't Forget Your Toothbrush, 1993