A circle, a line, black paint and card. Ah, the BBC. Here's a brand founded on British creative excellence - a touchstone for first-class journalism and quality entertainment around the world. And we bloody love it.

46 million people across the country use the BBC every day
9 national TV services
376 million The BBC's total global weekly audience
92% UK adults in online homes who use the BBC each week
£1.044bn BBC Worldwide's headline sales in 2017/18
£210m Amount BBC Worldwide returned to BBC Group in 2017/18

Despite forever being used as a political football, facing competition from commercial media (and sometimes competing unfairly with commercial media), being too left wing, too right wing, too male, too tokenistic, the BBC is always reliably the BBC, the broadcasting backbone of our culture.

But while its purpose remains to make great programmes and services that "inform, educate and entertain", the BBC as a brand has changed (almost) beyond recognition since 1927, when it was awarded its Royal Charter. Since then, its history has been punctuated by shifts in culture, media ownership and technology in the UK. In recent times, the rise of digital has required the Beeb to constantly innovate and adapt to a rapidly changing media landscape. 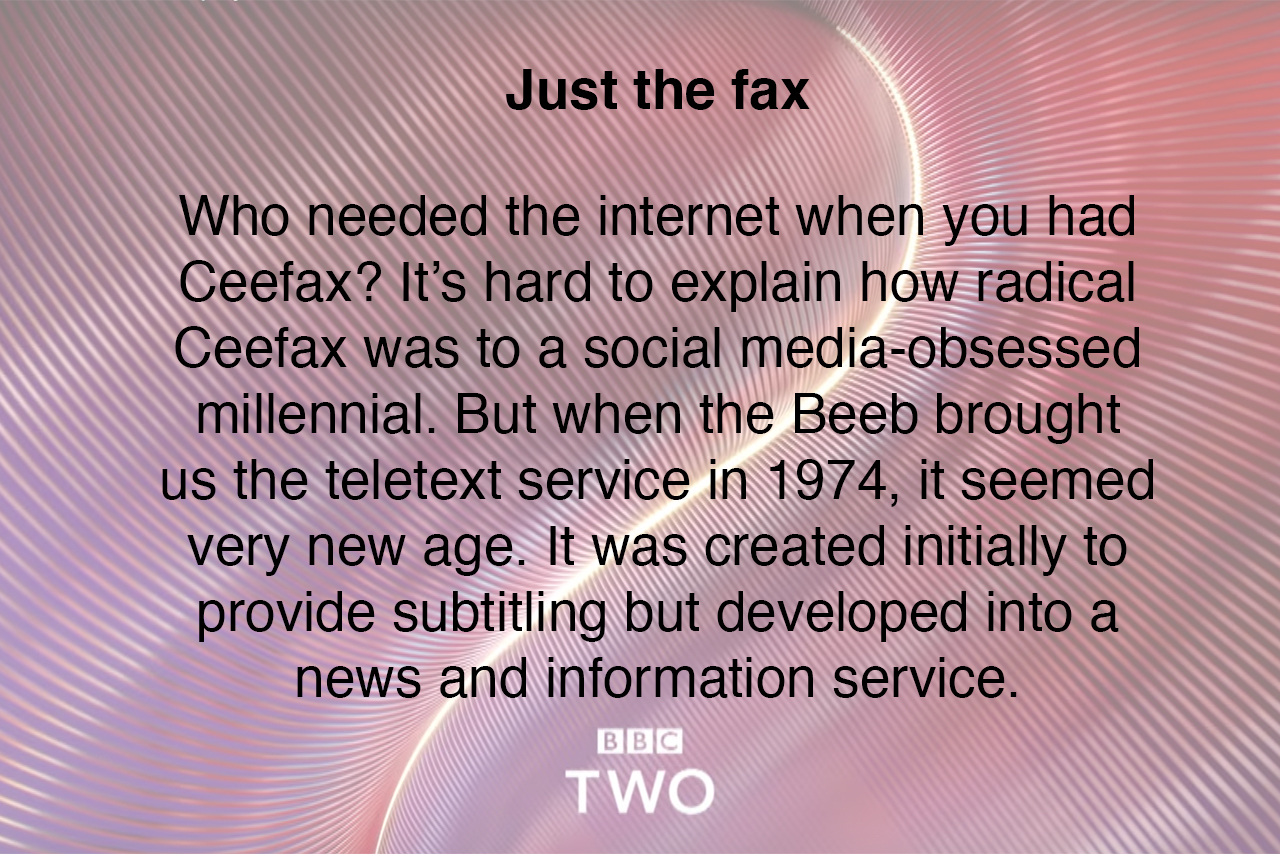 And as an advertiser, the BBC has delivered some of the most memorable examples of standout creative over the years, bringing out the best in its agency partners and creating its own in-house shop, BBC Creative, staffed by top creative talent.

How do we love thee? Let us count the ways… 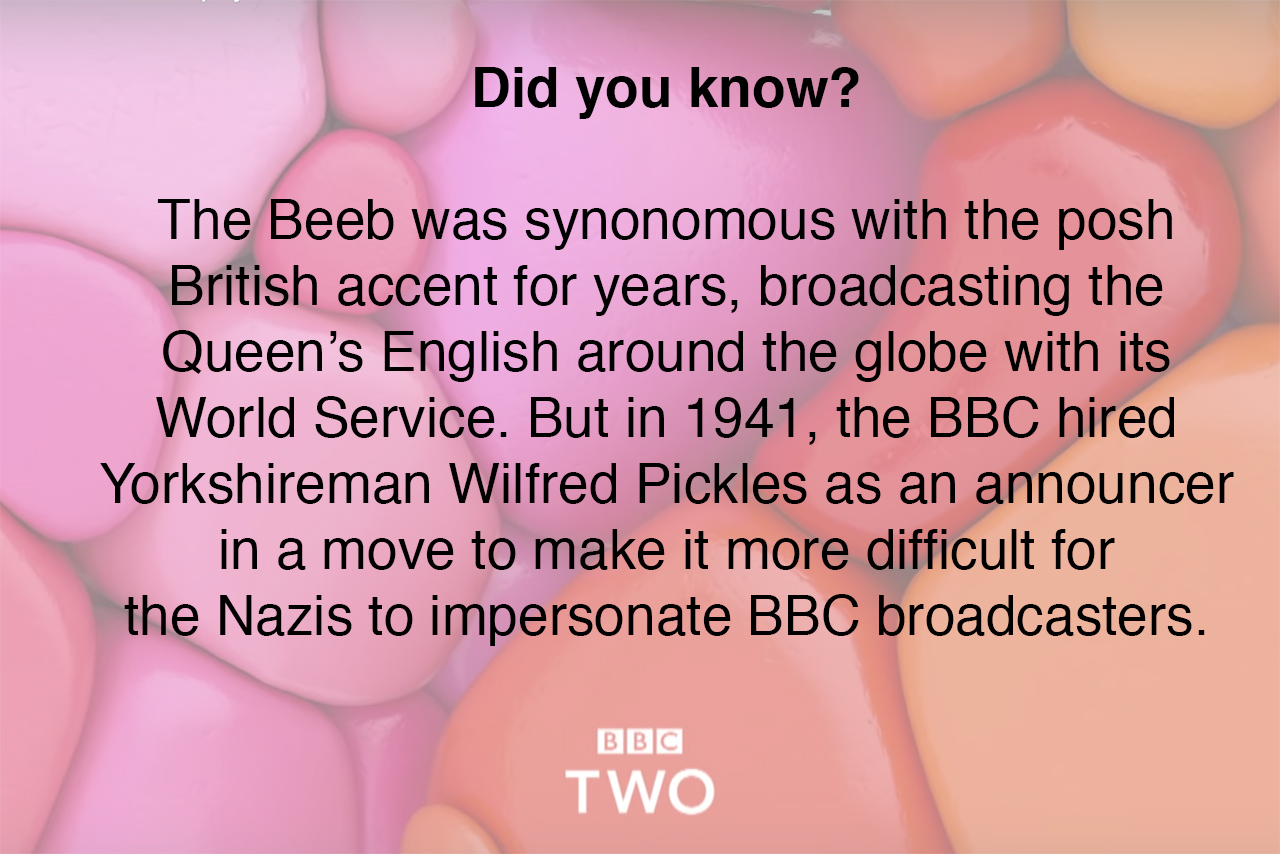 The concept of a visual identity for a TV channel? The BBC invented it. The tuning symbol – which became the test card – was the first piece of the design puzzle. It was a circle, a line and the words "BBC Television Service". It was not a product of a lengthy creative process. Engineer William Paffard was the man behind the drawing. His boss wanted a programme slide for the coverage of a radio exhibition, "Radiolympia". He said: "Gerald Cock, our TV boss, wanted a caption urgently, with Radiolympia in large letters. Could I draw or paint it by 3pm? Without thinking, I said ‘yes’ and dashed over to WH Smiths, Muswell Hill, to get a large white card, ink and brush. It took me all morning doing large black letters on the white board." A piece in The Observer that week (1937) said of the design: "It looks as if a BBC artist had tried to outdo the most modern of the moderns." The identity has seen many iterations since but remains consistent, strong and a marker of quality content. 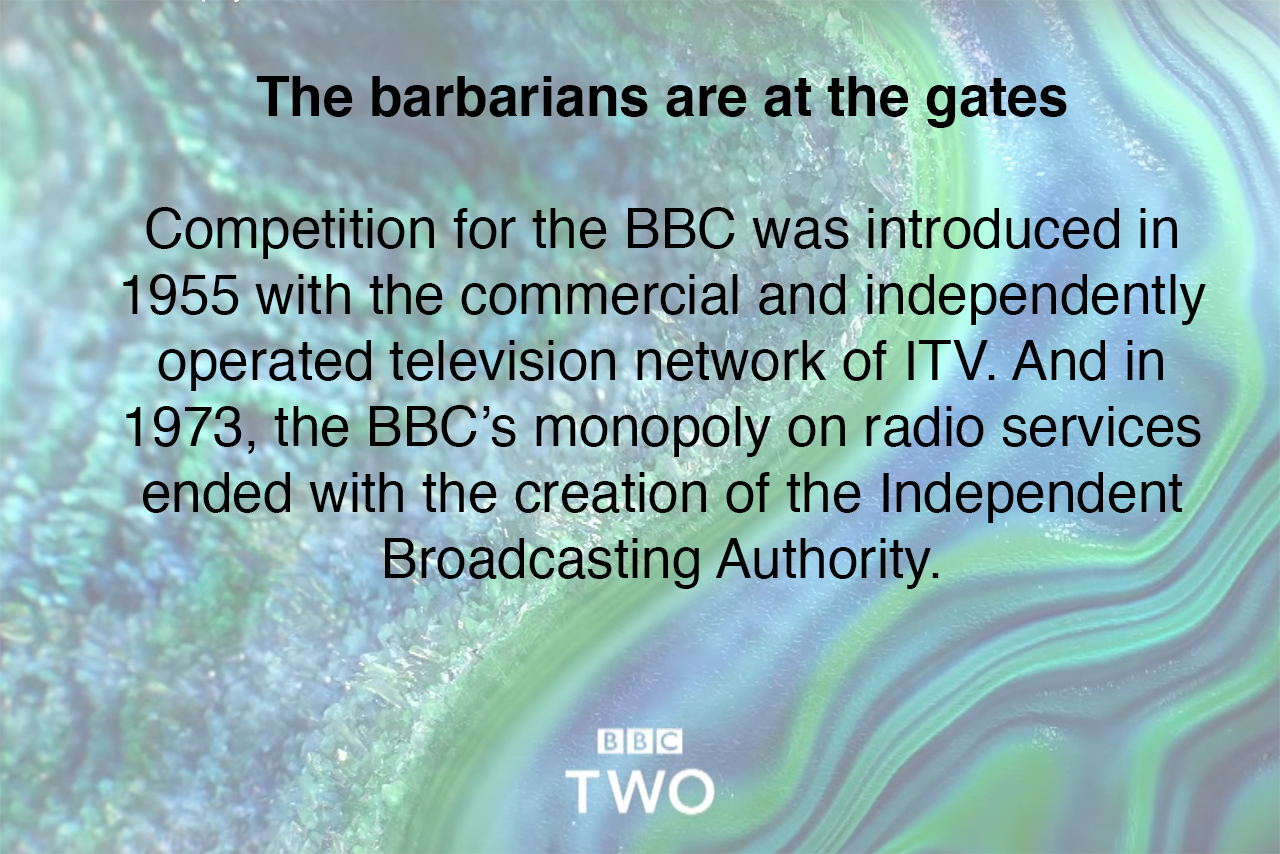 You’re going to reap just what you sow

Just like creatives, the BBC has always had constrained budgets and had to fight to prove its worth and keep the licence fee. So far, it’s done a brilliant job. The message was loud and clear in its most celebrated ad, "Perfect Day", by Leagas Delaney. A version of Lou Reed’s classic was the backdrop to the star-studded 1997 film that promoted the Beeb’s diverse music coverage. The original ad included performers Lou Reed, Bono, David Bowie, Elton John, Courtney Pine, Heather Small and Tammy Wynette. The endline drove home the message: "Whatever your musical taste, it is catered for by BBC Radio and Television. This is only possible thanks to the unique way the BBC is paid for by you. BBC. You make it what it is." The words appeared over the lyrics: "You’re going to reap just what you sow." The song was later released as a charity single for Children in Need.

The sign of a strong ad is longevity. And 17 years after it was first released, it inspired a sequel, set to The Beach Boys’ God Only Knows. This time it included Stevie Wonder, Pharrell Williams, Kylie Minogue, Dave Grohl, Jamie Cullum and Jools Holland. And this year, BBC Three released a fresh take on the ad, with a film starring the young voices that shape the channel. 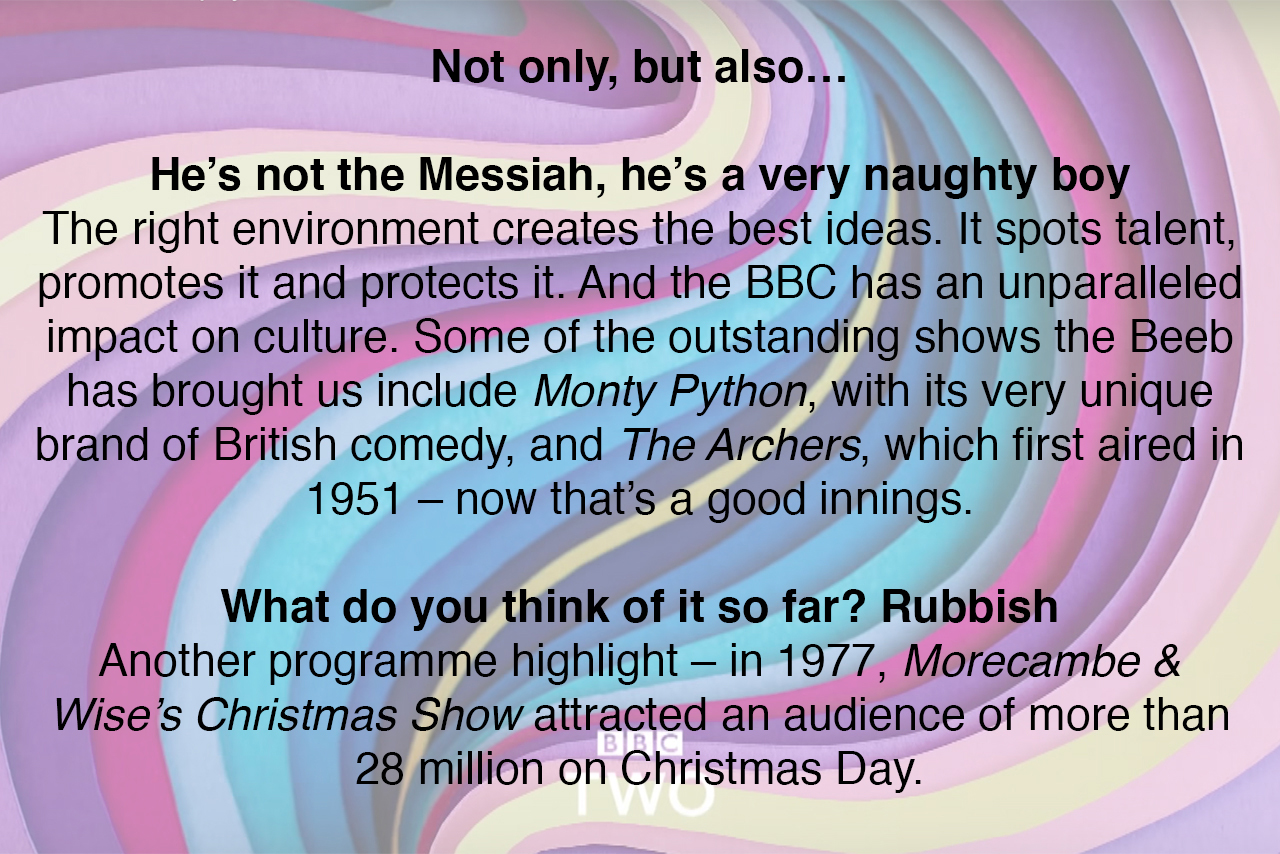 To launch iPlayer, the BBC fools the nation on 1 April into believing that penguins can really fly. Sir David Attenborough appears on BBC Breakfast to help with the joke. 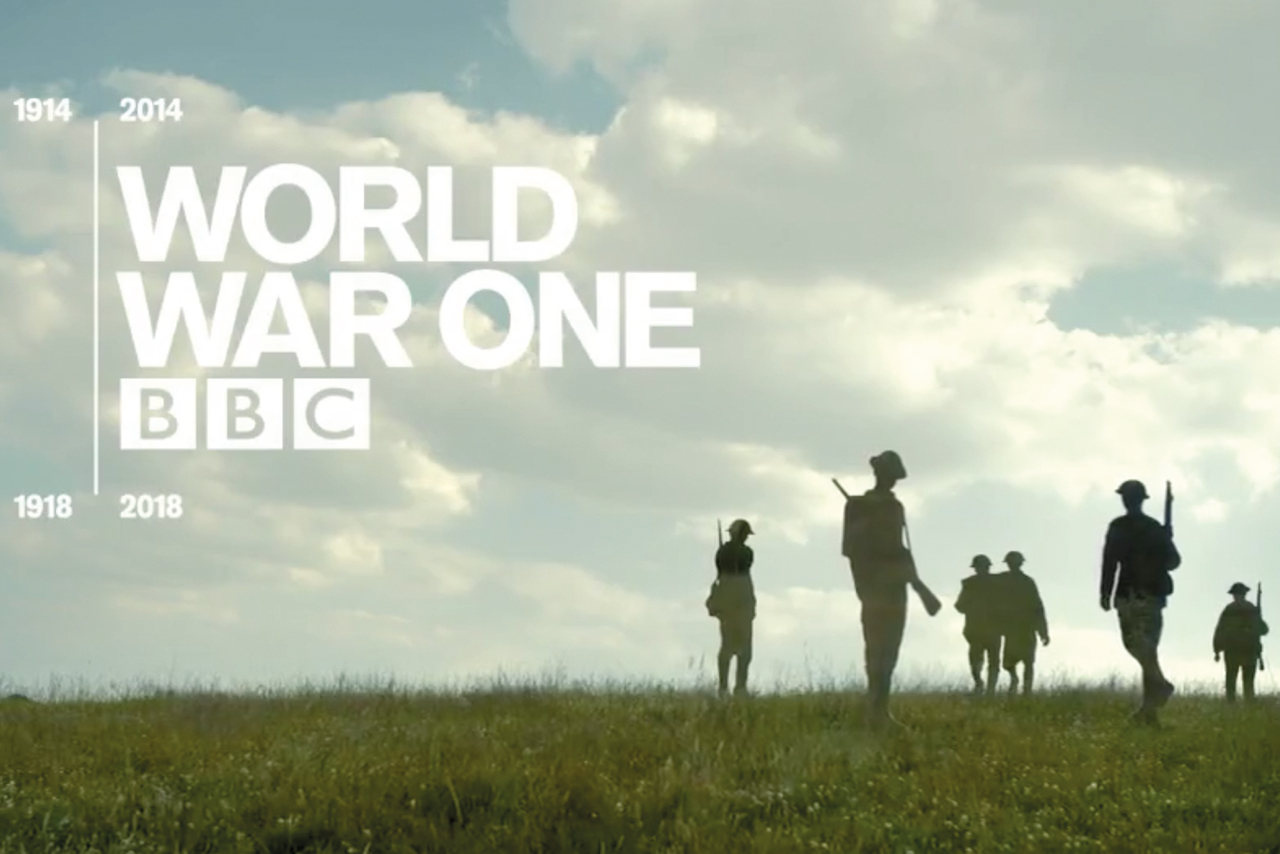 BBC One’s First World War promo marks the poignancy and avoids the mawkishness of the centenary of the start of the conflict to create something quite moving.

A mixture of live action and animation is set to a poem narrated by actor Charles Dance.

BBC One’s CGI Christmas ad tells an emotional story about a dad who shows up for his daughter during the biggest performance of her life.

Animated promo for the BBC’s Winter Olympics coverage highlights the athletes’ focus and determination through the use of colours and a strong soundtrack. 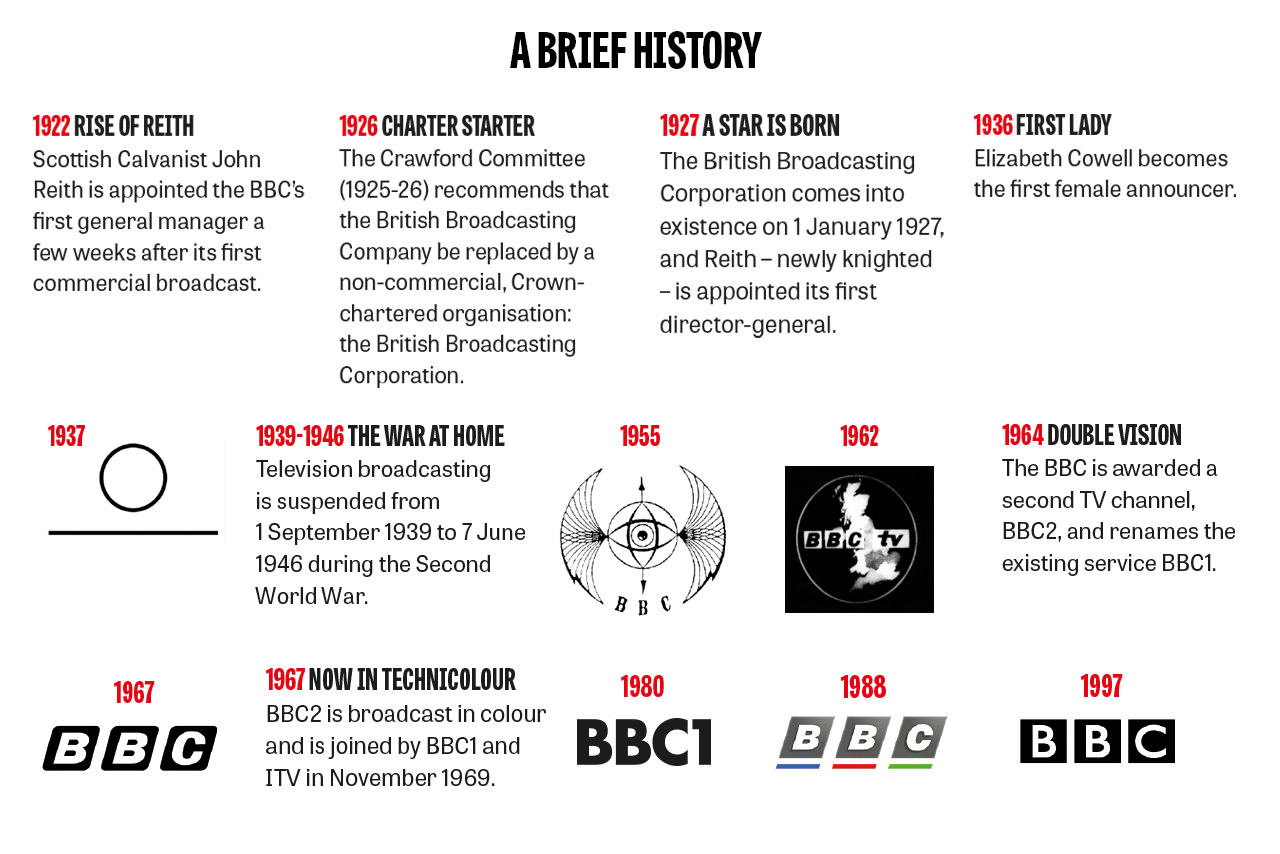 Best ads in 50 years: A rallying call for the BBC

Best of British brands: the BBC