The birth of Guinness is a story that illustrates perfectly the fundamentals of brand and advertising. Some 260 years ago, a young Irishman, Arthur Guinness, tried his luck launching a brewery at St James’s Gate in Dublin after inheriting £100 from his godfather. The beer he produced was pretty standard fare for the time – ale – and it was to be another 40 years before he decided to focus on porter, a darker beer popular among street and river porters and with a stronger version known as stout. Guinness Original and Guinness Extra Stout were born.

Product innovation is one thing but what propelled the brand forward was its ambition. Not content with being a product for the UK and Ireland, Guinness was quick to export around the globe and by 1858 had reached New Zealand. Moreover, displaying an impressively early understanding of the importance of its brand, in 1794 Guinness ran its first official press ad in the UK captioned: "Health, peace and prosperity." The harp symbol and Arthur Guinness’ signature have been associated with the brand for more than 150 years. And Guinness’ advertising has continued to delight and entertain with a distinctiveness as proud as its heritage.

How grand to be a toucan 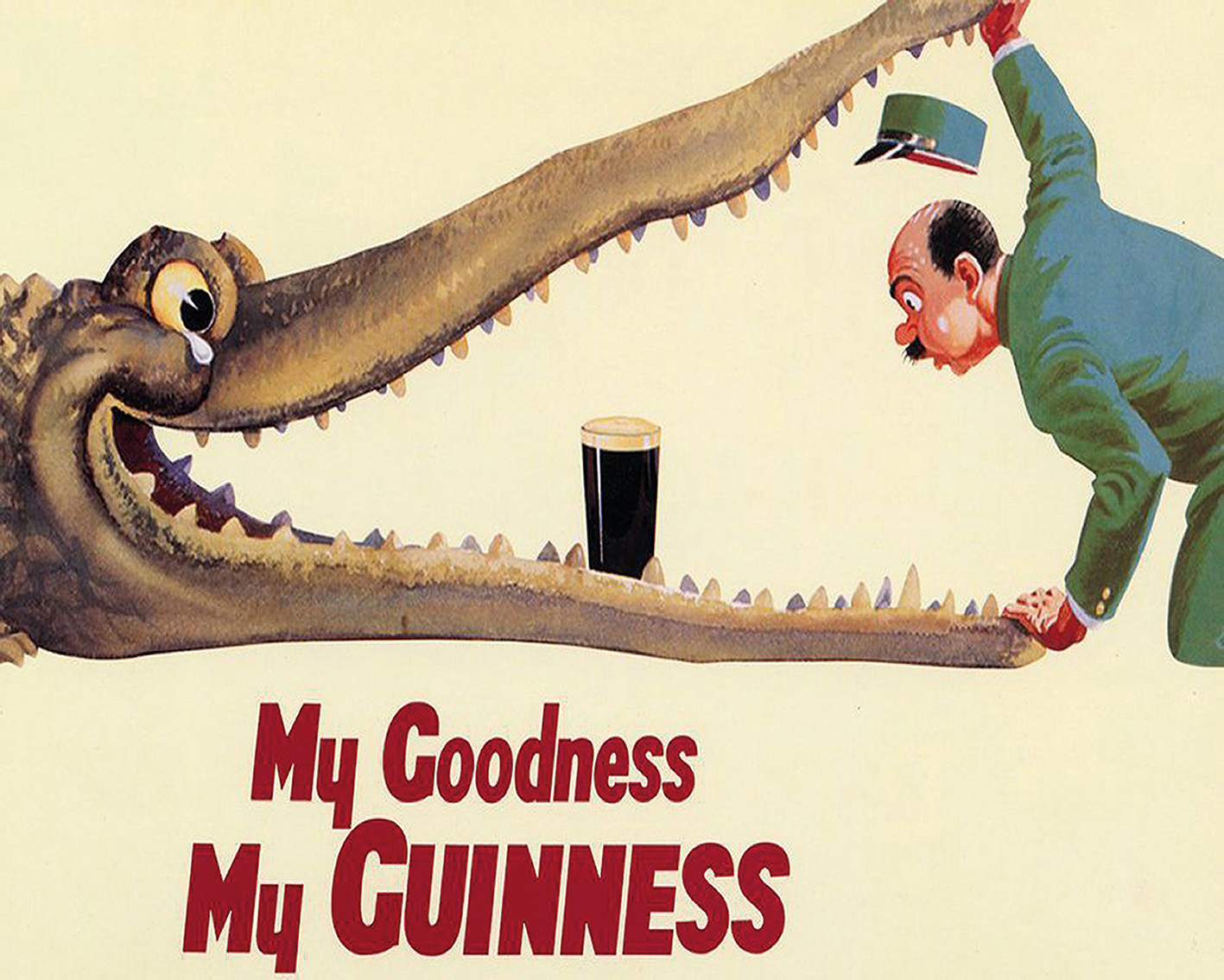 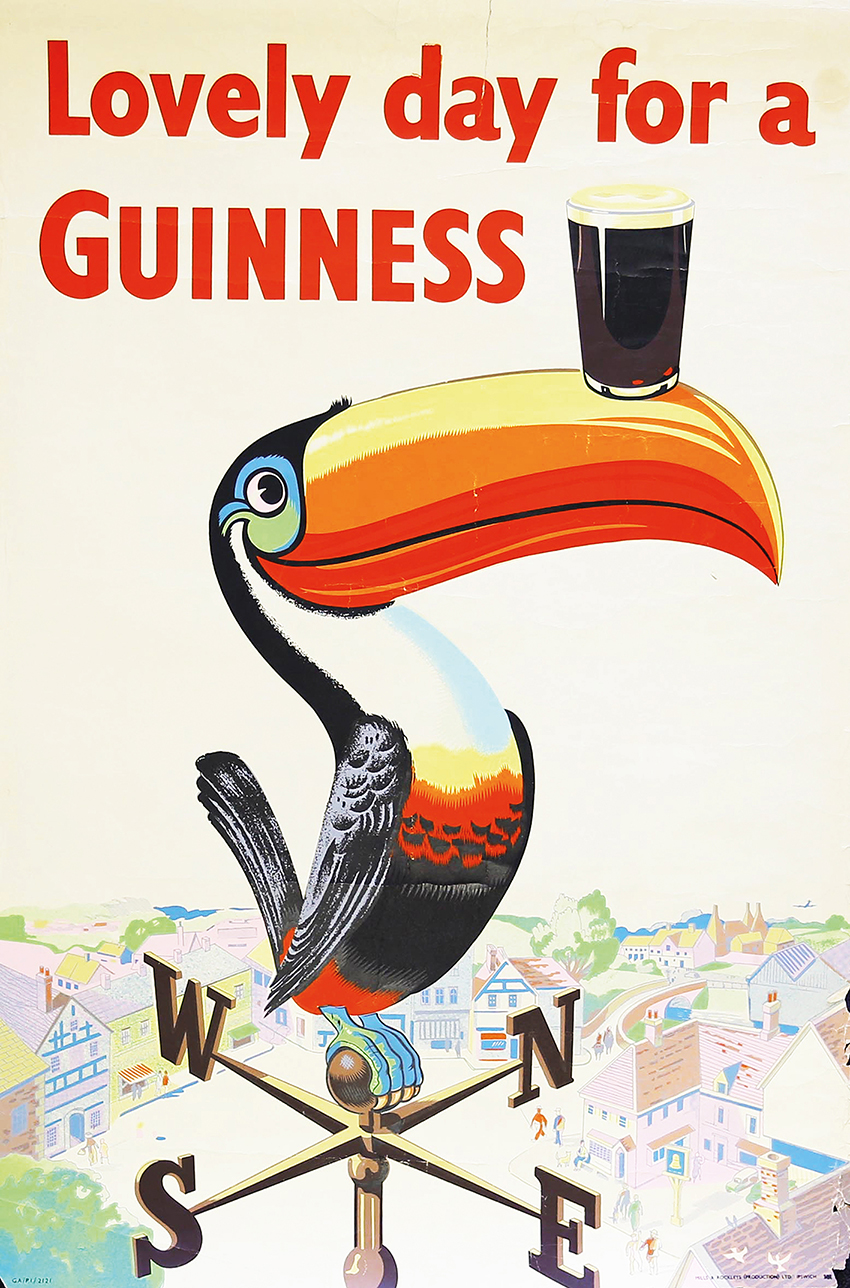 Guinness hired the agency SH Benson (which was later to merge with Ogilvy & Mather) when sales of the drink first began to decline. It introduced the slogan "Guinness is good for you" in 1929, which remained synonymous with the brand until the 1960s. Art director John Gilroy started working on the account a year later and illustrated the ads for the next 30 years. The use of animals was inspired by a trip to the zoo and the toucan became almost as much a brand symbol as the harp and Arthur Guinness’ signature. The bird was originally to have been a pelican but was changed to a toucan after the novelist, poet and Benson copywriter Dorothy L Sayers came up with the rhyme: "If he can say as you can, Guinness is Good for You, How grand to be a Toucan, Just think what Toucan do."

The black stuff's darker side 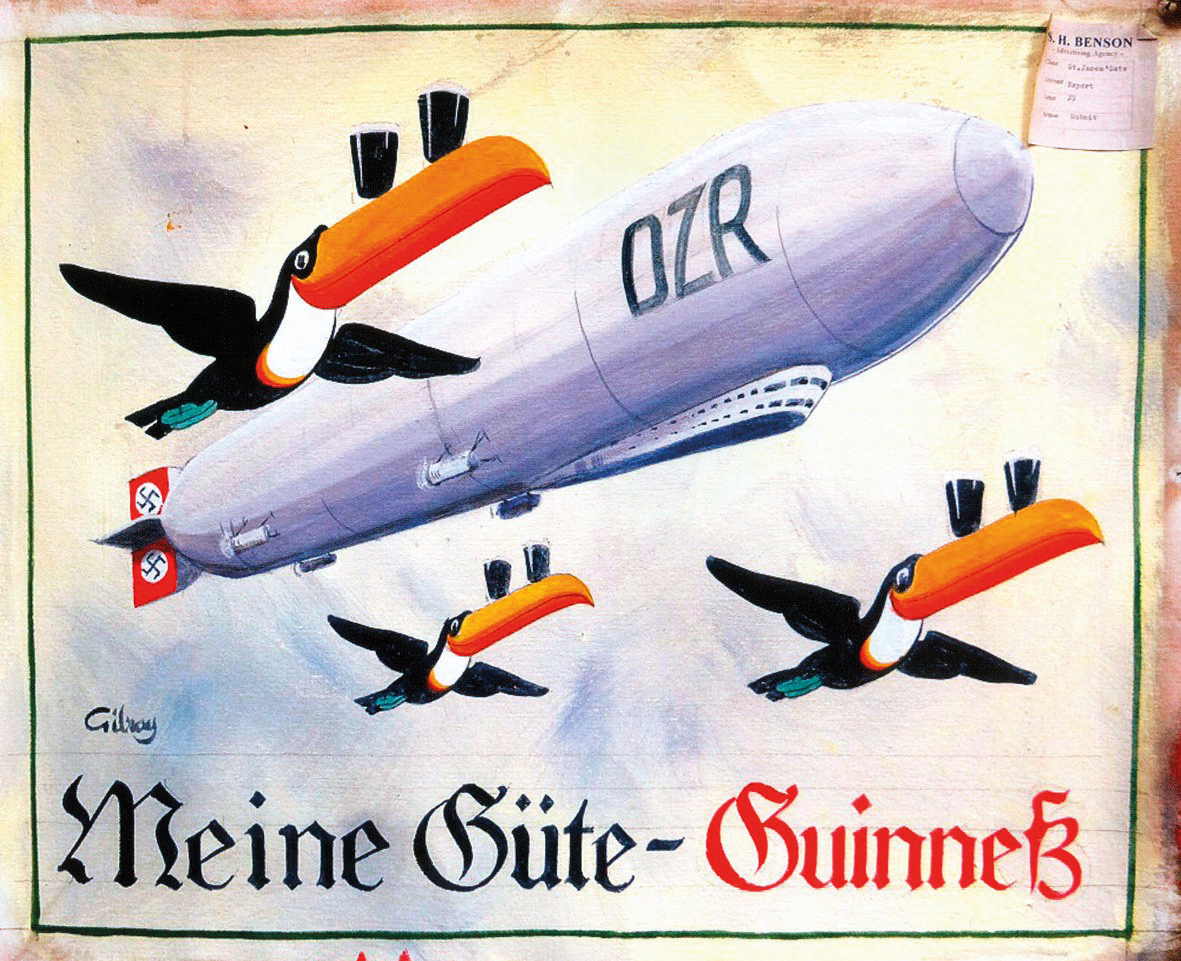 Gilroy’s "Girder" poster was the most popular in the "Guinness for strength" campaign but in the 1930s the advertising nearly took a darker turn. In 1936, Gilroy mocked up ads for Germany that incorporated Nazi insignia with translations of classic Guinness slogans. They never ran. Other work that failed to see the light of day were ads inspired by the artists Mondrian and Michelangelo. 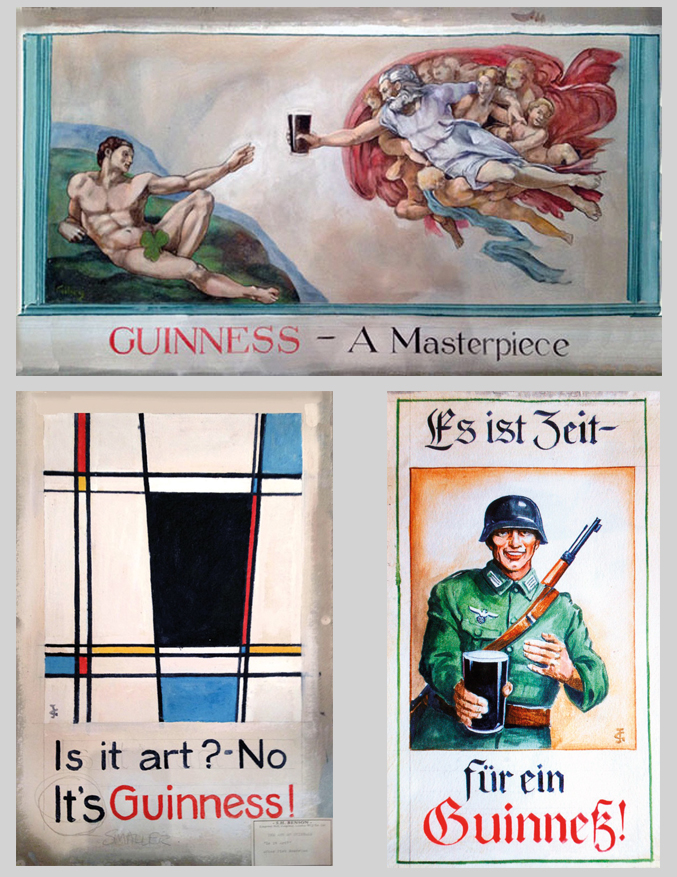 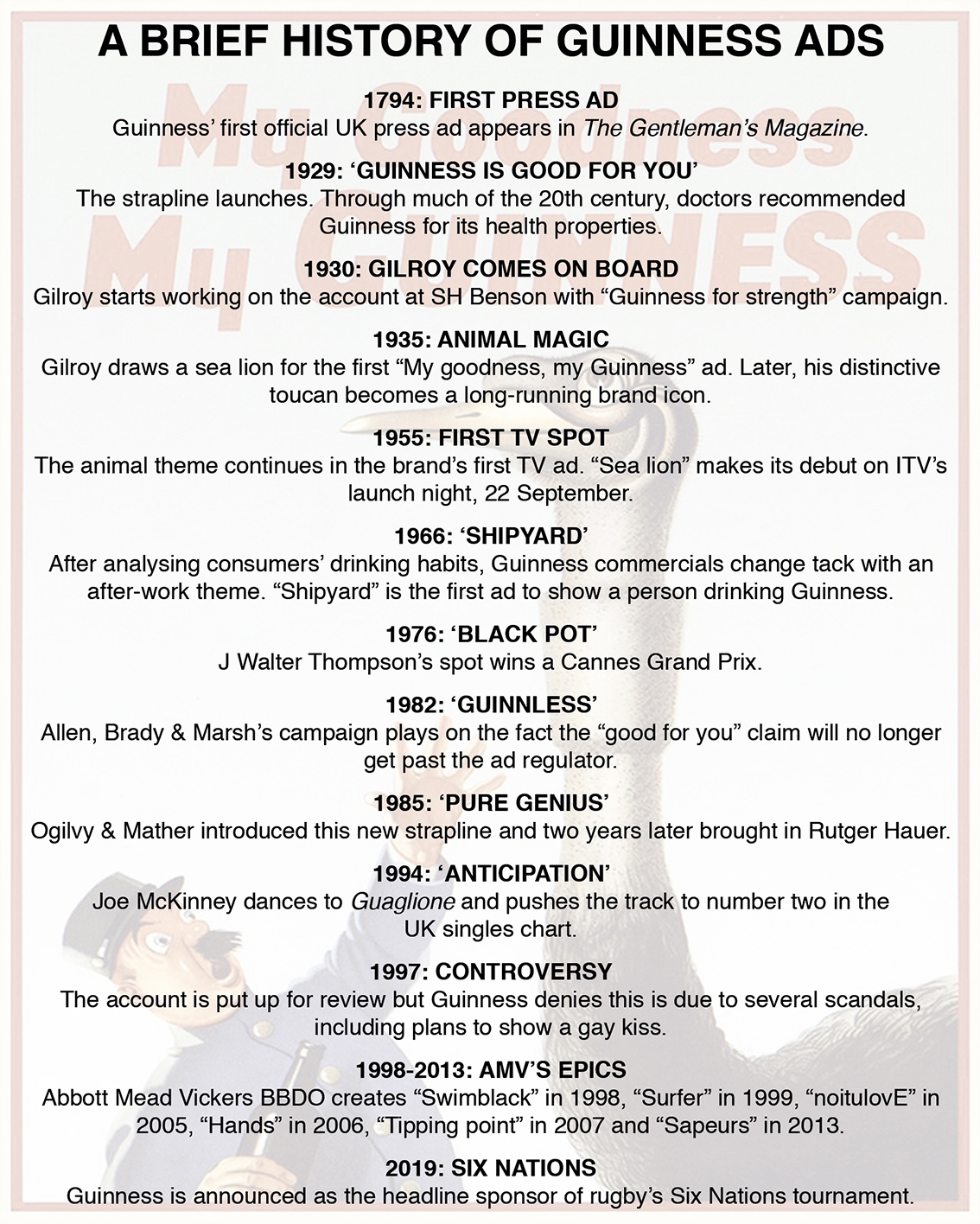 Is 'Surfer' the greatest ad ever made?

In 1999, Walter Campbell and Tom Carty at Abbott Mead Vickers BBDO created "Surfer". Directed by Jonathan Glazer and shot over nine days, it is one of the most famous ads of all time.

Campbell said he’d looked at the old Guinness ads and wanted to create an image that stayed with you. The giant, ghostly, white horses galloping on the waves came from Walter Crane’s 1890s painting Neptune’s Horses. Carty also drew inspiration from Herman Melville’s Moby Dick, which inspired the line "Ahab says, I don’t care who you are, here’s to your dream," while Leftfield provided the accompanying soundtrack.

Hawaiian brothers Brian and Rusty Keaulana were the surfers in the ad. The former told Campaign that he saw his life go by as he rode a 50-foot-high wave, while his brother described the experience as "craziness".

Despite failing to win the Film Grand Prix at Cannes (it was pipped to the post by Lowe Howard-Spink’s "Litany" for The Independent), "Surfer" was named "best TV commercial of all time" in a 2002 Channel 4/Sunday Times poll and again in 2009 by The Independent.

"The biggest character in the Guinness ad was the surf – it was 50 feet high. I saw my life go by. It was one of the biggest waves I ever caught in my career"
— Brian Keaulana

In 1969, a new era of Guinness advertising began when the account moved to J Walter Thompson. A fresh creative strategy aimed to elevate the Guinness brand and separate it from competitors by highlighting the drink’s distinctive dark colour. The agency picked up a 1976 Cannes Grand Prix for its "Black pot" spot.

In the 1980s, the Guinness account briefly moved to Allen, Brady & Marsh before ending up at Ogilvy & Mather, which devised the slogan "Pure genius" and brought in the Blade Runner actor Rutger Hauer to front its "The man with the Guinness" campaign in 1987. The star’s blond hair was a symbol of the foamy head on a pint.

Ogilvy & Mather’s work gave a nod to Gilroy’s quirkiness and love of animals. One ad showed a dolphin in an aquarium, apparently looking through the glass at Hauer sitting in an armchair and nursing a pint. "It’s not easy being a dolphin," he says. Hauer featured in more than 20 ads before "The man with the Guinness" campaign ended in 1994 with "Chain".

"Swimblack" was the first spot in the "Good things come to those who wait" campaign from Abbott Mead Vickers BBDO and launched in 1998 – the year the agency took over the account from Ogilvy & Mather. The commercial was written by Carty, art directed by Campbell and directed by Glazer.

…to those who wait

The fifth instalment in the "Good things come to those who wait" campaign (the strapline that had won Abbott Mead Vickers BBDO the account), 2005’s "noitulovE" marked the end of a four-year hiatus for the brand. It focused on three men in a pub, who are transported back 500 million years to show how long they’d been waiting for their first sip of Guinness. The spot was directed by Daniel Kleinman, who was famed for his work on James Bond title credits, and created by Matt Doman and Ian Heartfield. The ad picked up the Film Grand Prix at Cannes in 2006 and was the most awarded ad in the 2006 Gunn Report. Shot principally in Iceland over a two-month period, its release was pushed back owing to the film’s complexity, which resulted in post-production by Framestore taking longer than expected.

Guinness credited the spot with boosting sales significantly during the period in which it was broadcast. While revenues within the UK beer market declined by an average of -0.4%, the year-on-year figures for Guinness showed an increase of 3.6%.

Guinness’ 1955 "Ostrich tango" spot depicted a pair of cartoon Gilroy birds dancing. The 1994 "Anticipation" campaign by Ogilvy & Mather revisited the dance theme, with actor Joe McKinney gyrating to Guaglione by Perez Prado while waiting for his pint to settle. McKinney became a legend in Ireland and the track spent several weeks at number one on the Irish singles chart.

Pick of the week: it might not be the season, but Guinness looks as enticing as ever