The 'Kony 2012' film is again top of the viral chart this week after being shared another three million times, while Angry Birds bursts in ahead of AMV's '"round up your mates" St Patrick's Day viral for Guinness.

'Kony 2012', funded by a campaign group called Invisible Children and directed by co-founder Jason Russell, set the social web alight last week when its was shared five millions times in a matter of days.

The 30-minute film is intended to raise public awareness of the crimes of Ugandan warlord Joseph Kony and secure his arrest.

Still outperforming any previous video in the viral chart, Invisible Children has faced criticisms over its finances, prompting a second, eight-minute video featuring its CEO, which has not make it into the chart.

Last week's viral ad for Mercedes has retained second spot this week with 68,991 shares across the social web, but Cartier's "l'oyssee de Cartier" has fallen into fifth place with just 27,359 – less than half its shares last week.

As St Patrick's day approaches, Guinness's "round up your mates" has risen through the chart into fourth place with an uplift of almost 20,000 shares from last week.

The Guardian's "three little pigs" was shared 6,169 times in its third week in the chart, sloping to tenth position.

Due to technical issues with Twitter's API, shares from the social network were not included in the count. 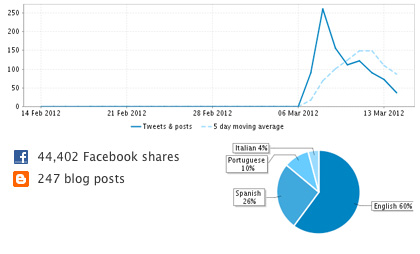 Which Olympic sponsor ads are most shared?

Campaign Viral Chart: Dramatic surprise at the top of the chart