Coca-Cola's short film about families reuniting in the Philippines is the most shared ad for a second week running, notching up 474,121 shares in the past seven days.

The film by McCann Erickson Philippines has now been shared in 708,758 Facebook status updates, 4,365 tweets and 117 blog posts, making an all-time total of 713,240 shares across the web.

The ad remains in the top position after being shared nearly 200,000 times last week but was just short of making the most shared of 2011 list.

The John Lewis Christmas ad dropped out of the chart this week, leaving space for Harvey Nichols' Christmas offering to enter the top five as well as festive ads from T-Mobile, EA Sports and Walmart. 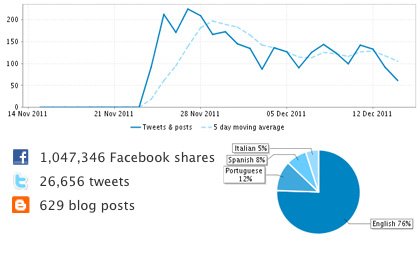 Coca-Cola to boost brand spend by up to $400m