A tear-jerking short film for Coca-Cola Philippines showing the brand helping ex-pat Filipinos visit their home country at Christmas went viral this week after being shared on Facebook 231,101 times.

The film by McCann Erickson Philippines was shared a total of 192,329 times in the last week - including 82 blog posts and more than 3,000 tweets.

Last week's most shared, an advert promoting same-sex marriage, fell to number three in the chart, having been shared just short of one million times since it first launched.

The controversial "last dictator standing" ad for Nando's dropped to number nine in the chart with just 9,831 shares in the last seven days.

Three weeks after it entered the chart, John Lewis's Christmas ad is more than 700 shares ahead of  rival, Harvey Nichols, which enters the chart for the first time with 11,106 shares this week.

The chart, produced in conjunction with Unruly, ranks ads according to the number of times they have been shared on Facebook, Twitter and in the blogosphere during the past seven days. 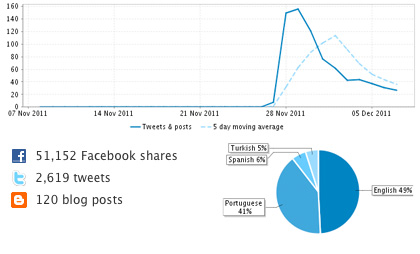