The trailer for Rockstar's latest 'Grand Theft Auto' game, GTA V, shot to the top of the viral chart this week, racking up a further 198,813 shares to add to its all-time total, now more than 500,000.

The trailer has been shared the most on Facebook (492,580 times) and has featured in more than 650 blog posts across the web.

Last week's most shared video, Microsoft's "productivity future vision", which was created in-house, fell to fourth in this week's chart, with 130,000 less shares in the past seven days.

GoPro's "the HD hero" lifted itself into second position from fourth with nearly 50,000 shares this week.

Dermablend's "go beyond the cover" viral, featuring Lady Gaga's friend – the tattooed Ricky Genest – held steady in third position, gaining 40,580 more shares this week and taking it to an all-time total of 443,044.

The chart, produced in conjunction with Unruly, ranks ads according to the number of times they have been shared on Facebook, Twitter and the blogosphere during the past seven days. Ads launched more than 30-days ago are not included. 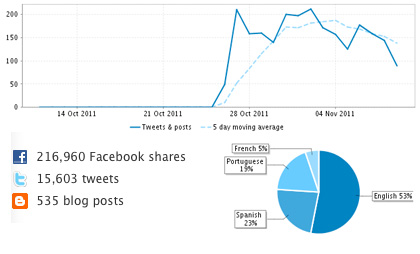