An ad starring Justin Bieber has leapt to the top of the chart this week with over 218,000 shares in the last seven days.

The film, created by JWT New York for Macy's Black Friday sale, has generated nearly 250,000 all-time shares across the social web, including over 22,000 tweets, nearly 220,000 Facebook updates and more than 60 blog posts.

Chuck Norris joins Bieber in the most shared chart, with his ad spot for World of Warcraft entering second position with a weekly total of near 210,000 shares.

The John Lewis Christmas ad that was top of the charts last week drops to fourth position, shared just under 100,000 times this week.

"Catvertising", the spoof commercial for advertising agency John St holds on in the top three with 99,607 shares this week, adding to its all-time total of 279,861. 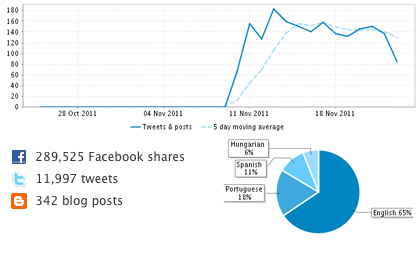