By freeing its campaigns from dated ideas of 'maleness' and celebrating individuality, Axe has broken the mould when it comes to marketing to men.

"Sex sells" – once a cornerstone of advertising toiletries to men – is a model that is no longer effective. For Axe, the world’s biggest male fragrance brand (known as Lynx in some markets), a marketing strategy based on the notion that liberal application of its deodorant equates to sex, or conquest, was running out of steam.

Fernando Desouches, senior global brand director for Axe/Lynx at Unilever, says the brand had been rooted in the notion of attraction being connected to conquest. Today, however, "attraction is a game of equals, and masculinity is what makes you sexy", he adds.

While sales remained robust, Unilever felt that the brand was not fit for the future. While it was still growing across markets each year, critics argued that the brand’s objectification of women increasingly belonged to a bygone age, and a surge of new entrants meant it was losing market share.

Meanwhile, the marketing team could not have failed to notice the tension between this criticism and Unilever’s focus on purpose and developing a sustainable business that benefits society as a whole, not just its own bottom line.

The company entrusted the Axe relaunch to creative agency 72andSunny Amsterdam. It believed the brand was falling out of step with society. Carlo Cavallone, the agency’s executive creative director, described Axe as feeling "anachronistic", adding that it "didn’t correspond to where culture was moving".

While sales were not declining, the suspicion was that the hyper-masculine Axe narrative was no longer connecting with existing consumers and would not be relevant to future ones.

Danny Feeney, 72andSunny Amsterdam’s strategy director, says research confirmed that Axe’s brand equity was in decline. "In the years preceding the campaign, it was clear that women didn’t like the way gender was represented," he adds. "If you are selling attraction to men, you need women involved too. To have deeper rates of engagement with women, Axe needed to change."

Unilever invested in research across ten countries and talked to 3500 men to gain insight into their relationship with the brand and understand the problems they faced with their own definitions and experience of masculinity.

According to Desouches: "Men were performing masculinity, not living it." He adds: "The market was changing – we had more competitors, and men were willing to incorporate more male-grooming into their daily routine. And the digital environment had changed both the mating game and the media landscape."

It was also clear that not only was the brand failing to connect with women, but that women also actively rejected stereotypes of masculinity. According to Unilever, 90% of women said they liked men who were "true to themselves". Another revelation was that almost half of all men were afraid of looking different for fear of being judged. Therefore, the team set out to discover why men were feeling this pressure and to unpick the confusion surrounding masculinity.

Unilever’s team also delved into attitudes to relationships, and confronted the difficult dynamic between women and the brand head-on.

Desouches also credits The Mask You Live In, a powerful documentary from The Repres-entation Project, which works toward a world free of limiting stereotypes and social injustice, as a key source of creative inspiration.

The film follows boys and young men struggling to negotiate society’s narrow definition of masculinity. Pressured by the media, peers and even their parents to "be a man", boys face myriad messages that encourage them to disconnect from their emotions, devalue authentic friendships, objectify and degrade women and resolve conflicts with violence. The resulting crisis in masculinity, in which boys must conform to punishing and suffocating gender ideals, was a key inspiration for the brand refresh team. 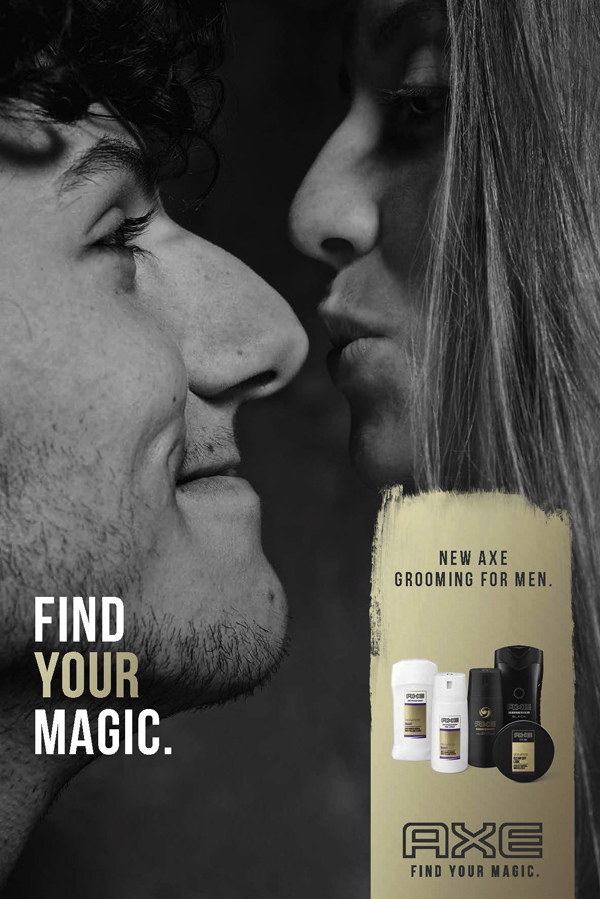 Axe set out to become the world’s number-one male-grooming brand. It aimed to do this by creating a "new" Axe, which would inspire men through individuality, and communicate that attraction is a connection, not a conquest. With 98% of men saying they had been told to "man up" at some point in their lives, Axe decided to offer a liberating alternative.

Desouches describes the essence of the campaign as individuality. He explains: "We wanted to empower men to be the most attractive man they could be – themselves." This theme was at the heart of the creative plan. As a key point of reference, Feeney pointed to a Judy Garland quote: "Always be a first-rate version of yourself, not a second-rate version of someone else."

Axe asked 72andSunny to connect it with a broader purpose: to advocate for the abandonment of male stereotypes.

"The big shift was moving the marketing model away from positioning [to focus] on purpose," says Feeney. He believes that the campaign discovered this real purpose by liberating men from a "toxic" version of masculinity.

Axe emerged with the strap-line "Find your magic". Fast-paced ads, featuring men and women using its products as tools to fuel their individuality, were launched in the US in January 2016, before being rolled out globally.

The activity also involved an array of brand ambassadors. These included musician John Legend, who became part of the Axe Collective, an initiative to mentor musicians and film-makers with the aim of showcasing their work at the Toronto Film Festival.

The brand also launched the Axe Collection, a premium range of grooming products.

Influencer marketing was key to the strategy, which was activated through the Instagroom platform. It used data to create content to answer questions consumers were asking about male-grooming on Google. "We hit on something interesting in culture; influencers were willing to expose themselves, but we had to be mindful there was no disconnect between the brand and the platform," says Feeney.

The goal of reinventing masculinity presented many and varied challenges. "Some stuff went down like a lead balloon," admits Cavallone, "but we had to be brave – executionally and creatively. But it is a difficult journey to go on when you are breaking category conventions."

This meant different things in different markets. In Singapore, for example, there was a sensitivity to showing men with long hair – apparently a hangover from an old government policy against hippies and gangsterism. "We were happy at the controversy, but we recognised in some markets it was about taking incremental steps," adds Cavallone.

The brand had to take on racism in France after using model and activist Shaun Ross in its ads. Ross, an African-American with albinism who launched the #InMySkinIWin movement, has given voice to a new generation of role models who champion individuality and self-respect. Desouches explains: "In France, people reacted very badly… but we kept the ad on air."

According to Desouches, "diversity is not a differentiator" when it comes to marketing, so the creative executions had to stand out. The work also had to connect with a broad church of consumers. As Feeney explains, Axe is a mass-market brand: "Our bullseye isn’t the New York hipster, it’s regular guys. We aren’t being progressive for progressiveness’ sake. It is not about a trend, it’s about a human truth. You don’t have to be super-progressive to buy into the brand."

The new Axe has been a standout success, both creatively and commercially. The team points to the 12% organic reach of the campaign as being crucial to its success.

"Some stuff went down like a lead balloon, but we had to be brave – executionally and creatively" - Carlo Cavallone 72andSunny Amsterdam

According to 72andSunny, purchase consideration went up and the global growth rate of the brand has tripled.

"It will drive more bravery within Unilever, as this risk has been recognised as a lever for more brands and underlines the power of igniting the conversation around gender," adds Feeney.

The campaign garnered more than 39.3 million digital views and four billion media impressions in the first quarter after launch. But most importantly, it sparked a global debate about masculinity, with 225,411 direct engagements with the film and more than 12,000 comments across all platforms.

In addition, brand perception has shifted substantially, with 30,000 posts referring to "Find your magic" on social media, and overall positive sentiment for Axe rising from 14.74% to 41.35%. Since launch, there has been significant brand re-evaluation by consumers. YouGov studies show purchase consideration among men in the US has risen from 16% to 20%.

For Desouches, bringing the new Axe to fruition was a challenge of creative leadership. "You have a problem with leadership if it takes you a long time to realise that you are in the past," he warns. "What sex would give us in the past was provocation, but if you want to change, you have to continually provoke – and recognise what it is to be an individual now."

He invested significant time in "digging into" the challenges of masculinity. "We needed to push and let guys reconnect with their emotions, and society is pushing men to perform."

Desouches urges other brands to embrace purpose, saying: "If this brand can change into something that is good for society, then every brand can. Many issues are not being discussed. We want a lot of brands to join us so we can release men from the constraints of masculinity and have a better society."

Lynx: can it convince consumers it's about more than getting laid?