'The Game Before The Game' shares the pre-game rituals of football players, fans and celebrities around the world, as they silence all doubts, distractions and fears in their preparation for victory.

'The Game Before the Game'

'The Game Before The Game' shares the pre-game rituals of football players, fans and celebrities around the world, as they silence all doubts, distractions and fears in their preparation for victory. Every ritual from every player and nation is completely authentic, as is the role that Beats headphones has come to play in each athlete's preparation for the game.

It also includes some of the world's biggest celebrity football fans: LeBron James, Serena Williams, Rio Ferdinand, and Thierry Henry. The target audience for 'The Game Before The Game' was 16- to 24-year-old males interested in the World Cup 2014.

'The Game Before the Game' campaign goals were to position Beats at the heart of World Cup 2014, dominate coverage around athletes, be part of the biggest World Cup moments, increase online engagement amongst football fans and be the number-one-selling headphones of the World Cup.

Every four years the biggest brands compete for domination of the world’s biggest sporting event: the World Cup. The problem was that Beats was not a sponsor of the tournament. Furthermore it is not even a sports brand, and had just been banned by FIFA. So, we decided to change the conversation to the game that only Beats could own: the pre-game.

We focused on creating an entertaining and sharable long-form film that would get us talked about and help us to own the pre-game. The campaign launched with a five-minute film on YouTube that went viral on its first day. The film featured the pre-game rituals of footballers, celebrities and fans around the world as they transformed pressure and distraction into focus and victory.

Through our social channels we shared the stories behind every ritual and watched as the world began to share their own. Non-sponsors are restricted from mentioning the World Cup or associating it with their brand. In addition, many of our key target markets in Europe had restrictions about what you could show on TV. Key elements of the film such as religious rituals, and food and alcohol rituals would have been banned in certain markets. This made the content provocative and perhaps even controversial.

People were driven to the content through a combination of rich media and online PR advertising. We targeted global sports fans in key markets and based in strategic business priorities.

By leveraging our Beats family with our influencer strategy, we were able to connect and engage with fans through our storytelling content across multiple touchpoints. We targeted authentic integration with key broadcast partners to blur the line of studio shows/games and our film.

In addition, we used 360 degrees of communication to maximise our breadth and depth of reach, by highlighting certain athletes when they were the talk of the tournament. This demonstrated our cultural and timely relevance. For the semi-finals we collaborated with Jay-Z to create a two-minute remix of the film, featuring original lyrics about  'The Game Before The Game'.

For the final execution, we collaborated with David Hasselhoff to create a spoof of our own film. It was seeded with key industry influencers and international press at an exclusive premiere screening of the full film in London.

Press included international sports writers for global papers (The Guardian, The Sun, IHT, New York Times) Custom Beats headphones in team colours were delivered to the top teams in the tournament. Despite the ban, the players continued to wear them, drawing even more press attention to the brand and our campaign.

At the end of the World Cup, each player from the winning German team received a special pair of 24-carat gold Beats, delivered to them by Naomi Campbell. Beats headphones are the headphones of choice for the world’s top footballers. The World Cup is the pinnacle of football and the biggest sporting event on the planet. 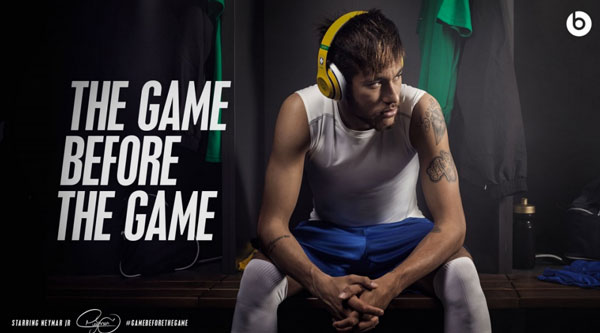 Bose hires Grey London as it takes the fight to Beats