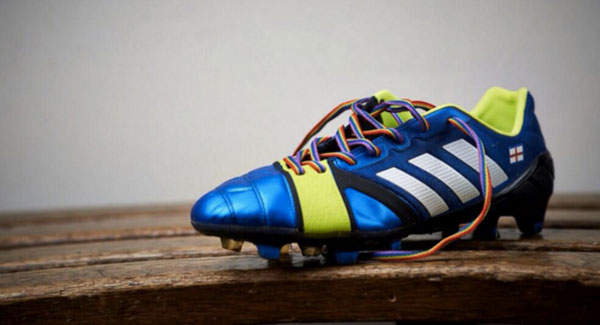 Homophobia is often referred to as sport’s last great taboo. At best, football has traditionally been silent on the issue. For instance, in 2005 the BBC asked all 20 Premier League managers to comment on the subject, but every single one declined. Likewise, in 2010, the FA asked players to take part in an anti-homophobia video, but not one would take part. At worst, many high-profile figures in the game have made blatantly homophobic comments. As a result of this culture, as we entered 2013, we had the bizarre situation whereby not a single one of Britain’s 5000 professional players was openly gay.

In 2013, Paddy Power set out to address this subject. After all, the brand likes to tackle taboos and prides itself as the punters’ champion. Well, in this case, the public’s views were already well ahead of the authorities: according to YouGov, 49% of British adults agreed that it needs to be addressed, with only 9% disagreeing. Sensing the chance to disrupt the status quo, Paddy Power teamed up with Stonewall to get people talking about the taboo and to generate mass support for gay footballers. The campaign device was a simple one – rainbow bootlaces would be sent out to every professional team in the country and players would be asked to wear them, to show support.

The 2013 campaign was a great success, with over 50 clubs taking part, a host of celebrities showing support and social media embracing the idea, with over 320m Twitter impressions. Marketing magazine even named it one of its campaigns of the year. However, to borrow some footballing clichés, we knew that it was still "early doors, with plenty to play for and a long way to go". Too many big names, at big clubs, were still silent. Too many sponsors were keeping quiet. Too many fans lacked a voice. So in 2014, we decided to step the campaign up a gear, and "make it bigger, better and rainbowier".

Teaming up with the big guys

This time around, we enlisted the authorities’ support, in advance. The Premier League, FA, PFA and Football League all came on board, as did champions Manchester City and FA Cup winners Arsenal. The latter even lent us five of their first-team players, to star in a cheeky TV ad, set in a changing room to get across the core message about "changing the game".

We wanted the campaign to have the broadest possible appeal, so we took over the whole of Metro (a first for the publication) and worked with its advertisers to ensure that every single display ad (more than 60 in total) carried either the rainbow laces device or bespoke copy. Then we carried this approach through to social media, where dozens of companies voiced their support. In all, more than 40 brands joined in, from Smirnoff to Starbucks, Google to Pot Noodle, O2 to Vodafone, McDonald’s to Premier Inn. Even Paddy Power’s rival, William Hill, voiced its support. Fair play!

Giving the fans a voice

We set aside 50,000 pairs of laces (four times more laces than in 2013) and distributed them in Paddy Power shops. This still wasn’t enough to meet demand (we had more than 100,000 requests in a week), but it made sure that all levels of the game could show their colours.

What cultural impact did the campaign have?

In 2014, over 70 professional football clubs supported our campaign, including 75% of the Premier League – a watershed moment. From Arsenal to Aberdeen, Everton to East Fife, Norwich to Newcastle, the whole game agreed that things needed to change.

Other sports joined in, with prominent figures in tennis (Boris Becker and Martina Navratilova), boxing (Ricky Hatton), racing (Ruby Walsh) and rugby (Gareth Thomas and the Wasps squad) all lacing up. Celebrities cheered on from the sidelines – from politicians (Ed Miliband and the Scottish Parliament) to popstars (Boy George, Danni Minogue and Professor Green).

The campaign also generated more than 400m Twitter impressions, over 6m Facebook impressions and 1m YouTube views – all in one week. In one Daily Mirror poll, 66% of football fans said they would be actively supporting the campaign at the weekend and in a separate survey, 65% of regular betters said they thought more highly of Paddy Power as a result. Finally, Roy of the Rovers laced up and the campaign even featured as a storyline on Coronation Street, which is perhaps the ultimate definition of cultural impact.

Of course, we’re not kidding ourselves that the problem has disappeared overnight, but most commentators agree that the campaign has changed British football culture for the better. Certainly, when Thomas Hitzelsperger became the first Premiership player to come out (albeit as he retired) there was an avalanche of support from fans. So let’s leave the last words to him: "It was great to see so many players and clubs getting involved in rainbow laces."