Category: The Brand Inside 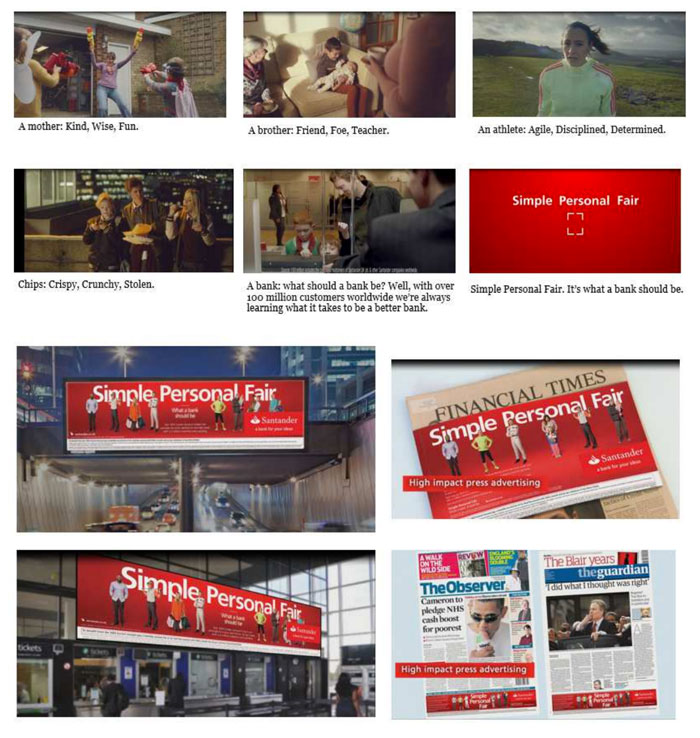 A tough 2013 set the agenda for change. In 2013 Britain was limping out of the worst economic crash in a generation. Banks were perceived as completely out of touch with society.

If times were tough for the established banks, the challenges were greater for a Spanish newcomer. Santander faced two unique issues:

1. We needed to evolve our brand identity. Formed through a merger of three building societies – with three different cultures – we needed to establish what Santander stood for

2. Customer loyalty and satisfaction needed improving. Despite having a great product in our 1|2|3 Current Account, we had few loyal customers and ranked amongst the worst high-street banks for customer service.

This is the story of a radical brand overhaul to redefine Santander from the inside-out.

Research unearthed the root of our problems

Too often, banking insights start with products. But to overcome our challenges, we needed to understand the relationship consumers wanted with banks.

In research, we listened to customers telling us about the strains in this relationship. They spoke about their frustration when things went wrong and took too long to resolve.

About feeling overwhelmed by the vast range of products. About being ripped off.

Hearing their pain-points, we realised they were all facets of the same deep-seated anxiety, underpinning the relationship between bank and customer: customers didn’t trust banks, and wanted to feel confident in managing their money.

Our task became clear, and it would be mammoth, requiring a wholesale change in how we did business.

To understand precisely how to rewrite this relationship, we started by exploring the elements we were already getting right. Our customers defined their positive experiences in the same terms.

The best encounters with us were simple, personal or fair. New account openings and the mobile app were praised for being simple.

Friendly interactions with staff and rewards linked to spending were championed for being personal. Genuinely beneficial products and reciprocal rewards were heroed for being fair.

Therefore, if customers’ best encounters with us were either simple, personal or fair, imagine if we could make every experience hit all three. We hypothesised this could build genuine trust, successfully reframing the relationship.

We had our new values – now we challenged ourselves to embed them thoroughly in Santander by the end of 2014.

To instil a culture in a workforce of 20,000 required some serious groundwork. This couldn’t be an edict from above: we needed our people to have ownership over the values, defining what they meant for them. So we welcomed our staff’s feedback and input.

Ana Botín, Santander UK CEO, conducted workshops countrywide to find out what being Simple | Personal | Fair meant to our staff.

We encouraged any colleague – from branch to boardroom – to suggest ideas in our online forum to make us more Simple | Personal | Fair. Nearly 2000 colleagues participated, suggesting 542 ideas and casting 23,000 votes.

This culminated in ‘The Santander Way’, a manifesto empowering every member of staff to speak up and say "Stop. This isn’t right; we need to do things differently."

Our groundwork paid off.

Getting colleagues to support Simple | Personal | Fair in theory was half the battle – now we had to ensure they lived the values on a daily basis by making tangible changes to our products and communications.

These changes affected every aspect of the business:

• Launched the SmartBank app to help with money management

Our showpiece was a multimillion-pound advertising campaign that brought to life each value’s individual merits, whilst giving Simple | Personal | Fair meaning as a collective entity. 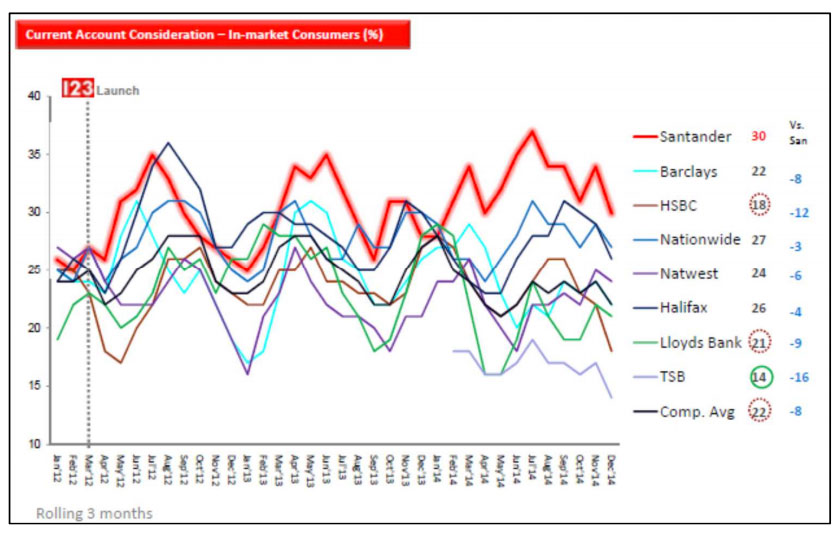 Our cultural overhaul has transformed the business.

Internally, it’s driven a dramatic increase in staff engagement, helping us become one of The Sunday Times’ Top 25 companies to work for in 2015 for the first time.

• YouGov’s 2014 Buzz rankings put Santander at number one for most improved positive sentiment, with a 28-fold improvement on the previous year

• In a study of 179 Personal Financial Journalists (April 2014), Santander ranked number one as the company impressing them most and as the company changing for the better

• Trust improved by 12%, helping us win Most Trusted Mainstream Bank at Moneywise Awards 2015

• Our loyal customer base has increased from 1.6m to 3.5m

Crucially, the shift in brand metrics has mirrored an increase in consideration and sales:

The impact on Santander’s bottom line has been huge. Profit before tax is up 26% (2014 vs 2013), with growth in operating income over eight consecutive quarters and unprecedented increase in banking liability (+£25bn).

Simple | Personal | Fair has truly transformed the bank – and this is only the beginning.