To showcase innovation and good practice, Campaign is publishing the best case studies from the Marketing New Thinking Awards, held in association with Sky Media. This week it's the turn of Hostelworld and Lucky Generals with "Youth Hostelling with Chris Eubank, which won the Marketing in the Moment category.

The video was viewed more than 300,000 times in total, and was shared widely. Chris Eubank’s launch tweet alone was retweeted more than 1,500 times.

It was immediately trending at number two in London and number three in Manchester, as well as trending on Reddit.

Achieved a reach of 1.9 billion.

But in 2015, when a Twitter user called Carl Packman got former boxing world champion Chris Eubank to admit that he wasn’t aware of this joke, it suddenly became topical again.

Spotting an opportunity to showcase the quality of Hostelworld’s properties, we swung into action. In four days flat we made a genuine "Youth Hostelling with Chris Eubank" trailer – starring the man himself.

Then we released it back onto Twitter and watched the euphoria erupt.

To be successful in marketing these days you need to make your brand part of popular culture. And one of the best ways to do that is to be topical – to make a contribution to a live conversation in social media.

But has any brand waited 18 years to seize exactly the right moment to do this?

The task here was to get the clean, stylish interior of a modern hostel seen by as many people as we could, without breaking the bank.

For a cost in the low tens of thousands of pounds, "Youth Hostelling with Chris Eubank" – set entirely in one of Hostelworld’s finest properties – achieved a reach of 1.9 billion and changed perceptions for the better.

Hostelworld is a global platform for booking hostel accommodation – the largest of its kind. Using Hostelworld, travellers can search 33,000 properties and book a bed in 170 countries around the world.

Hostels are uniquely social places offering young travellers the chance to not only explore the local culture, but also connect with like-minded people from other countries. Reflecting this, Hostelworld’s strapline is "Meet the World", and most of the communications budget is spent driving awareness of this brand promise.

However, Hostelworld also has a second communications challenge. It needs to challenge outdated perceptions of hostels by showing what they offer today – modern dorm rooms, squeaky-clean amenities, top-notch security and even private en-suites.

So that was the situation. Hostelworld needed to find a way to show off these great spaces without spending a lot of marketing money.

It was a watching brief.

To explain how we delivered on this challenge, we have to go back to the cult comedy I’m Alan Partridge, and one particularly memorable incident that saw the eponymous Alan desperately pitching programme ideas to Tony Hayers, the "chief commissioning editor of BBC television", in an attempt to revive his failed presenting career.

Partridge "A Partridge Amongst the Pigeons?"

That’s how "Youth Hostelling with Chris Eubank" became a pop culture in-joke. And for almost two decades that’s what it remained. People would reference it at dinner parties, in social media, and even at sports events to show they were Partridge fans and could appreciate great comedy.

But no one believed it would ever happen for real. Chris Eubank – the eccentric, monocle-wearing boxer Alan Partridge was referring to back in 1997 – is an active user of Twitter. That, of course, means other Twitter users can converse with him on the platform.

And on 9 August 2015, Carl Packman tweeted the following at him:

Chris responded. He didn’t seem to understand what Carl was talking about.

"Youth Hosteling with Chris Eubank unlikely to happen as Chris Eubank doesn’t seem to know what it refers to" they wrote.

Oh yes it was.

Within 72 hours, cameras were rolling…

Spotting the opportunity, the Hostelworld team swung into action. We got hold of Chris through his wife (who acts as his agent) and explained the situation to him.

Then we negotiated a fee to help us make a trailer. Because Chris had been out of the limelight for a while and was looking for ways to raise his profile, we were able to secure his services for a fraction of the fee a celebrity would normally command.

We organised a crew and within 72 hours cameras were rolling. Chris met the world of hostels and all the lovely people staying in them. We selected the YHA Old Steine Hostel in Brighton as our venue and made sure that we were showcasing all its great features in our film. 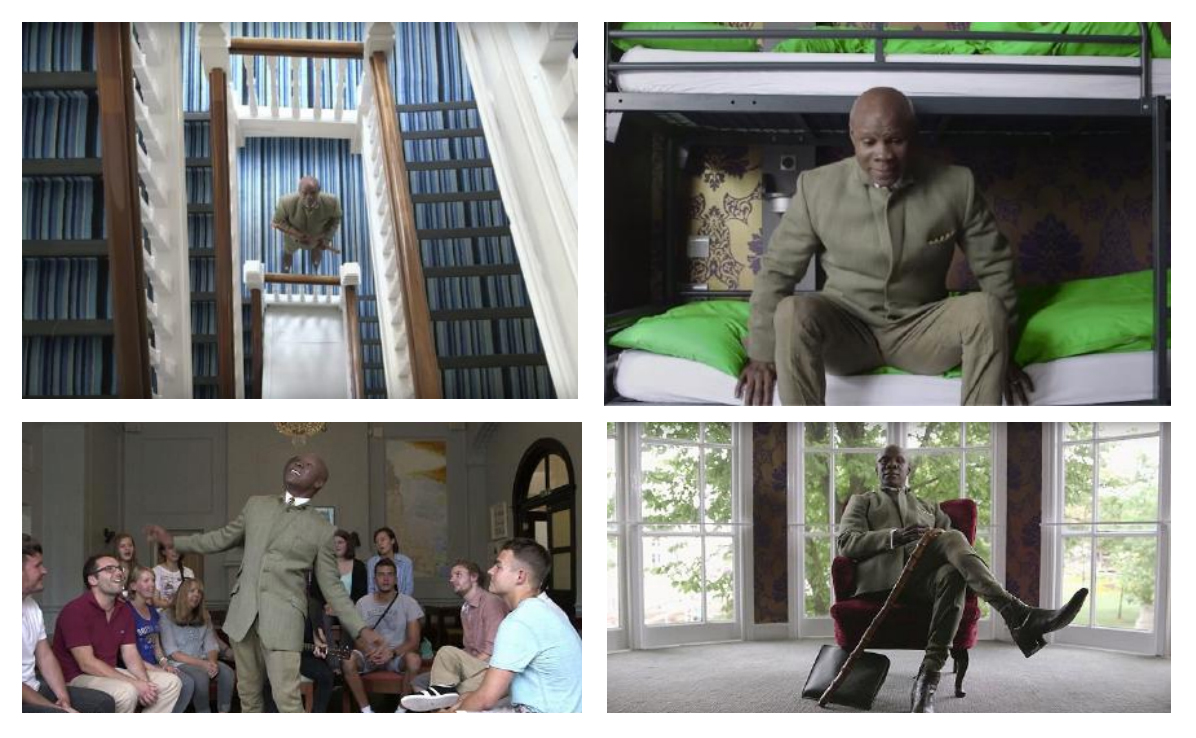 An 18-year-old joke finally gets its punchline

A mere four days after the original tweet from Carl Packman, we released our trailer back onto Twitter – through Chris himself. After all, it was Twitter that had made this joke topical again, and so Twitter users deserved to be first ones to hear the news. 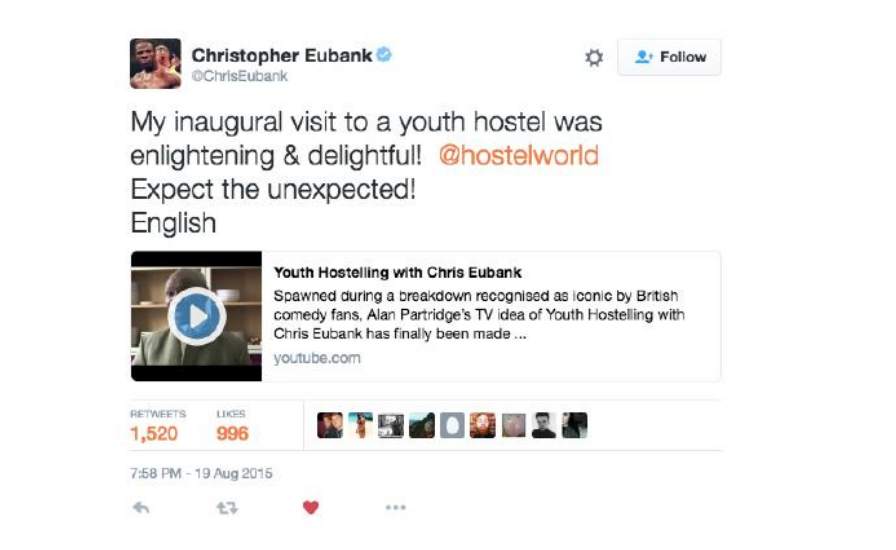 We were immediately trending at number two in London and number three in Manchester. We trended on Reddit as well. People went nuts as they realised that the joke had finally become a reality. The total reach generated on Twitter was in excess of 33 million. 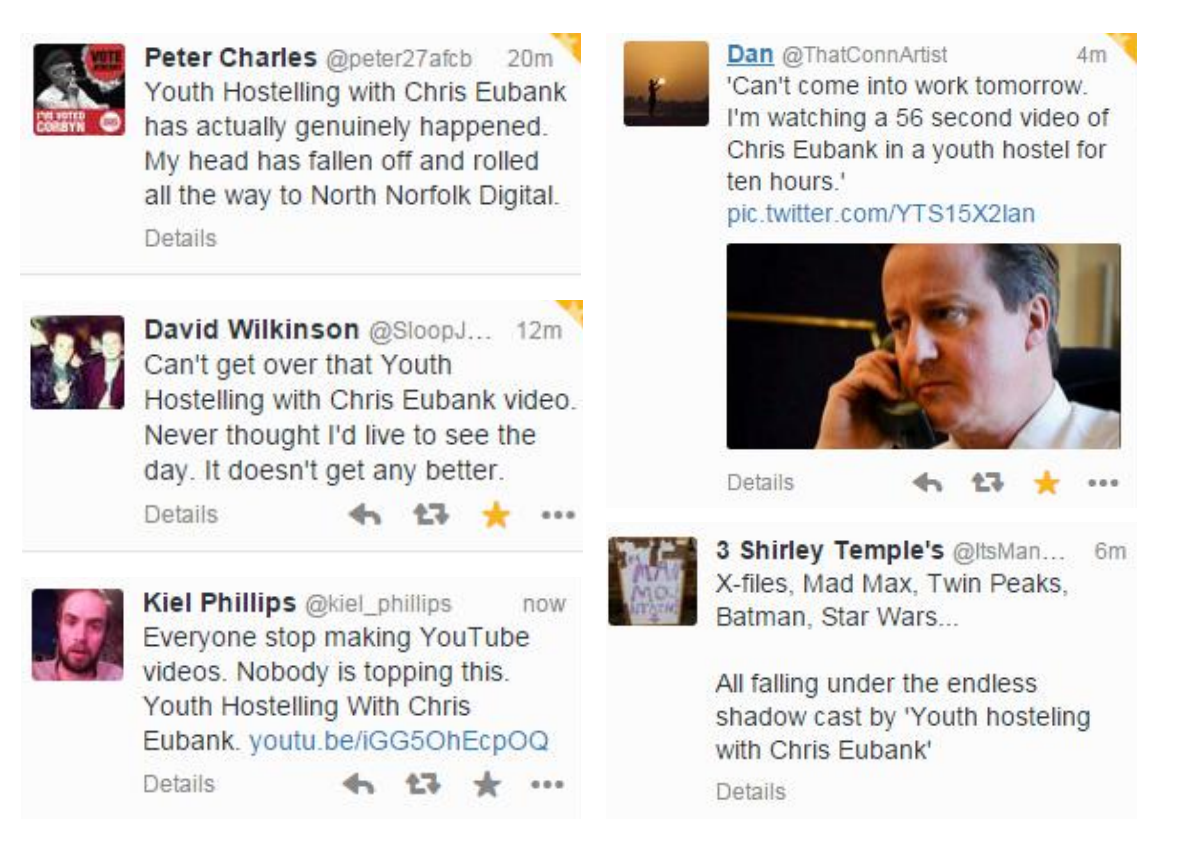 We also sent the video to all the press titles that had written about the exchange between Chris and Carl Packman. This generated 165 articles (Buzzfeed, The Guardian, Daily Mail, The LAD Bible, Unilad etc) with a combined reach of 1.9 billion (Gorkana). 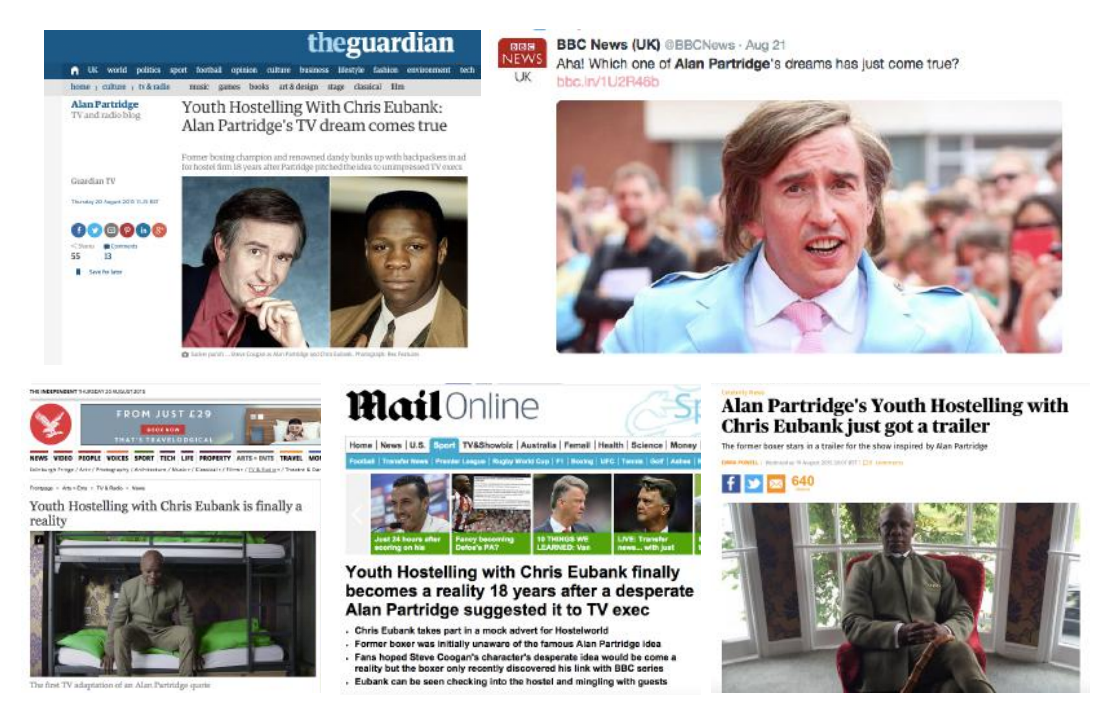 In total the video was viewed over 300,000 times, and it was shared widely. Chris Eubank’s launch tweet alone was retweeted more than 1,500 times. And whenever poor Steve Coogan – the creator and actor of Alan Partridge – made a public appearance, he was asked whether he’d seen our film.

Conclusion – timing really is everything

"Youth Hostelling with Chris Eubank" had been an in-joke for 18 years, but when it suddenly became topical, we sprang into action and made it a reality.

As a result, we were able to show the inside of a modern hostel to millions of people, addressing outdated perceptions of what hostels are like.

Hostelworld "In da hostel with 50 Cent" by Lucky Generals