Accompanying collection allows consumers to create their own items emblazoned with negative comments.

Diesel is the latest brand to challenge online abuse with a brazen campaign and fashion collection in which celebrities literally wear the worst insults they have received.

Each celebrity chose the worst online comments they have ever received to be displayed on clothing designed for them by Diesel. For example, Minaj was dubbed "The Bad Guy", Thorne called a "Slut" and Dorfman named a "Faggot". The items bearing these real comments are part of Diesel’s limited-edition Haute Couture collection, which will be available online and in stores from 19 September.

A series of videos feature the celebrities dance and ironically celebrate the hate that has been directed towards them.

Shoppers can also create their own one-of-a-kind Haute Couture items, printing the insults that they have suffered, in 42 stores around the world from 6 October. Diesel will donate a portion of proceeds from the collection to the Only the Brave Foundation, an anti-bullying charity founded by Diesel's parent company.

The campaign aims to show that, by exposing negative comments and treating them irreverently, hate can lose its power.

"The main thing is not to hide. Hate comments are based on the fact that people are hiding themselves," Bruno Bertelli, global chief creative officer at Publicis Worldwide and chief executive of Publicis Italy, told Campaign. "If you keep [hate] inside, it grows and hurts and becomes bigger and bigger." 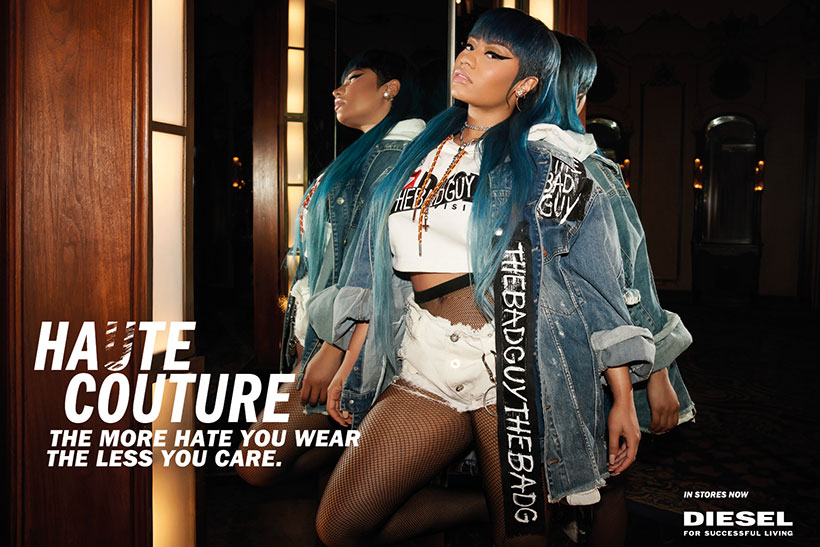 The campaign took more than a year to put together due to the sensitive nature of the topic, Bertelli said. Some celebrities who initially signed up later dropped out. Diesel is prepared to receive more negative comments as a result of this effort, he added, and those insults could become part of the campaign later.

Haute Couture is the next evolution in Diesel’s marketing plan to overturn "rigid" fashion conventions, Bertelli said. Diesel sees itself as an outsider brand that challenges conformity.

This used to mean going against the establishment, but now challenging conformity is also about questioning social media norms and images of perfection, Bertelli said.

Yet the brand tries to do this with a playful tone of voice, without preaching to people, a Diesel spokesperson said. "We can show people an alternative way without telling them how to behave," the spokesperson added. "We’re not pretending to know the absolute truth."

Diesel’s mission began with last year’s "Go with the flaw" campaign, a celebration of flawed beauty set to Edith Piaf’s classic song Non, Je Ne Regrette Rien. Since then, there has been an ad defending the ubiquitous ugly wool sweaters, starring leather jacket-clad sheep, and another film telling a love story in which the protagonists expose their imperfections.

In September, Diesel launched a collaboration with a popular kebab kiosk in Berlin – a twist on the usual trendy fashion tie-ups. 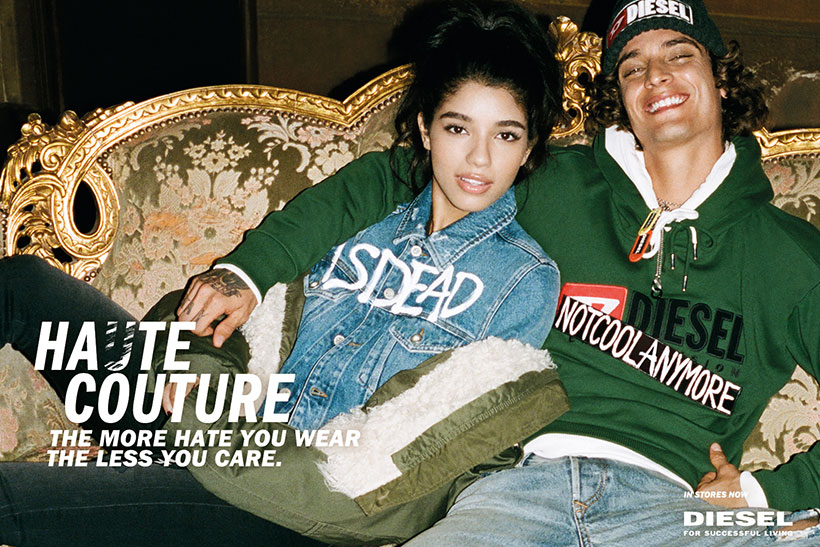 "Fashion is taking itself too seriously," Bertelli said.

Haute Couture mimics fashion campaigns that feature influencers, but it aims to do so in its own way. For instance, with the customisable items, the consumers – not the celebrities – become the real stars.

"Sharing negative comments, not hiding them, can be more inspiring than teaching or giving life lessons, which brands should not do," Bertelli added.

Diesel CMO warns against marketers being driven against data

Diesel "JoggJeans: Made to run away" by Publicis Italy

Viral review: Diesel teaches us to celebrate shortcomings with 'Go with the flaw'

Diesel "Say no to uncool wool" by Publicis Italy

Diesel "Go with the flaw" by Publicis Italy