It was widely reported recently that Katie Perry has overtaken Justin Bieber in the race for the largest international base of Twitter followers.

We know from our original SocialLife survey in March 2013 that Stephen Fry is the UK’s most popular social media celebrity across all platforms – with David Beckham also just ahead of several US pop stars including Perry, Bieber, Rihanna, Beyonce and Gaga.

Around the time that we were reporting Stephen Fry’s dominance, there was a media furore concerning soap stars caught out promoting bogus products on Twitter. Not only this, there have been other high-profile stories concerning celebrities’ failure to use the relevant hashtags stipulated by the Advertising Standards Authority when promoting items.

For example, Wayne Rooney was cleared of misleading his followers in a Nike Twitter campaign promoting football boots following a protracted investigation.

Correct celebrity endorsement practice is clearly a grey area, so we decided to investigate the attitudes that UK social media users have towards celebrities who promote goods and products via social media, to find out if it needs changing, or if it is something of which we should make light – as Jack Whitehall does here. 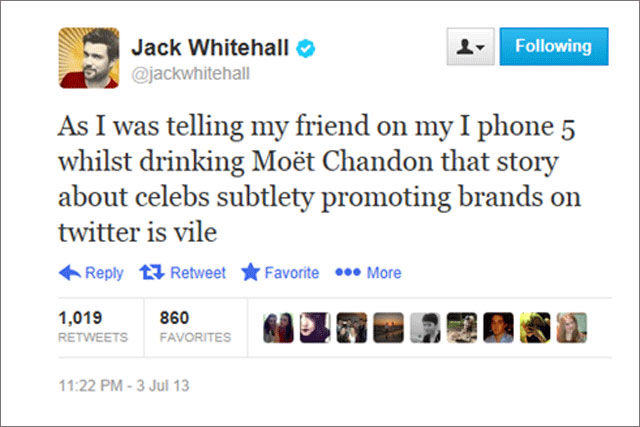 By way of slight digression, this figure of 33% is much higher than the paltry 5% who told us they regularly follow politicians on social media – a clear indication of the power of the celebrity voice in modern-day UK.

Next, we asked followers of celebrities whether they think it is obvious when something is being advertised or promoted by a celebrity. 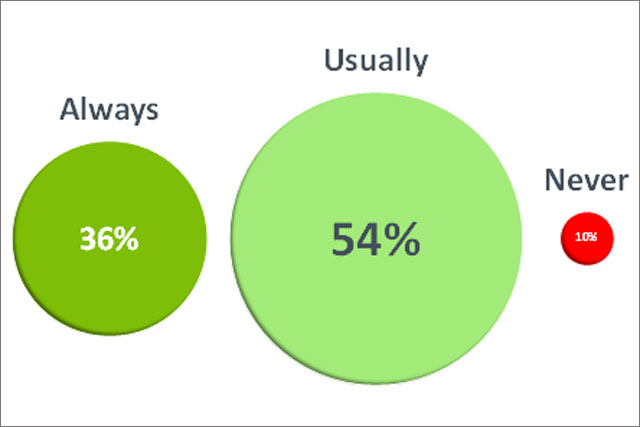 Most followers believe they can usually, or always, decipher when they are being sold something. But, of course, this also tells us that the vast majority are not always sure about when this is taking place.

What about the impact of celebrity endorsement? Do consumers mind? And if so, what have they done about it? Or, do they welcome it? And if so, do they act on the endorsements.

More than half (54%) told us they have not noticed the celebrities they follow making product or service endorsements at all. The statistics clearly indicate, for this group, that celebrity endorsements have not become an unwelcome intrusion.

And interestingly, more of those who have noticed celebrities endorsing products or services welcome this (25%) as become annoyed by it (21%).

More than a quarter (26%) told us they have ever bought an item they have seen promoted by a celebrity in this way. This is a very significant number and one that will be of interest to many brands. And the data is even more powerful if we focus on younger consumers, with two-fifths (40%) of 16- to 24-year-olds ever purchasing endorsed items and just under one in five (18%) doing so on a regular basis.

What about those who are annoyed by celebrity promotions? Do they stop following the celebrities they deem to have over-stepped the mark? In fact, less than one in five (14%) have ever done so although this figure rises to 22% among 16- to 24-year-olds.

Clearly there is no simple or clear-cut answer to the questions surrounding celebrity endorsement on social media. A minority of consumers are acting on endorsements and a minority are annoyed by celebrities over-stepping the mark. But what does come through very clearly from our research is that consumers are not always clear when they are being ‘sold to’ by celebrities they have chosen to follow.

This points to the need for greater transparency in social media communications and perhaps closer regulation by the ASA.