Broadcaster generated a pre-tax deficit of £26m last year, but forecasts 2020 will be in surplus and is paying back £1.5m in employee furlough support to the government.

Channel 4’s total revenue rose 1% to £985m in 2019 after digital growth increased by 18% to offset “challenging” linear ad market conditions on the eve of this year’s pandemic.

In its annual report, published today, the broadcaster said it generated £772m in TV advertising and sponsorship revenue – down 2.4% from £791m in 2018. This was ahead of an overall TV market contraction of 3% in 2019, which Channel 4 chairman Charles Gurassa said was dampened by a UK economic slowdown and continuing uncertainty around Brexit.

Channel 4 said the £19m annual decline in TV advertising and sponsorship was due to the “net impact of linear ad market decline”, as well as the £20m additional revenues from the acquisition of The Box Plus Network, which comprises music channels including 4Music and The Box.

4Sales, Channel 4’s sales house which sells advertising on behalf of the broadcaster’s channels, as well as UKTV and Discovery, underwent a 5.4% linear TV revenue decline to £950m in 2019. 4Sales’ revenue dipped below £1bn for the first time last year.

Gurassa said Channel 4’s linear revenues were halved in April and May 2020 as a result of “unprecedented declines in advertising revenue in the immediate wake of the virus”.

In response, Channel 4 moved to reduce its content budget by £150m and find another £95m in cost savings across the rest of the business. Board members volunteered pay cuts of 20%, executives’ bonuses were suspended and it drew down £75m from a commercial revolving credit facility.

However, this month has seen a return to optimism around the UK TV market, with media buyers anticipating a year-on-year return to growth in spend for October. A source at Channel 4 was particularly bullish, telling Campaign that 4Sales was looking at year-on-year growth for November of between 6% and 8%.

Gurassa was more circumspect in today’s report, adding: “While the advertising market has shown some signs of recovery as lockdown restrictions have eased, with the full extent of recession in the UK still unclear, we are maintaining a prudent approach, with contingency.”

Over the most severe "lockdown" period (23 March to 3 July), Channel 4 said it delivered "huge growth" in viewing and share across platforms, particularly among young viewers. It reported a 20% growth in viewing share among 16- to 34-year-olds across Channel 4 (up by 36% in peak-time), which is more than other terrestrial channels. All 4 also experienced strong growth, with its views up 54% over the lockdown period.

Channel 4 recorded a pre-tax deficit of £26m last year, having achieved a £5m pre-tax surplus the year before. As a publicly owned broadcaster, Channel 4 does not make a profit and invests all of its revenue back into the business.

The broadcaster said 2019 was planned to be in deficit, in order to fund its new national headquarters in Leeds and its new creative hubs in Glasgow and Bristol.

However, Channel 4’s chief executive Alex Mahon said the broadcaster would finish this year with a “cash surplus and a robust financial position to protect against any further economic instability caused by Covid”.

She added: "We will also have a strong base from which to continue the next phase of our transformation, building on the success we have shown in 2019 and 2020 in growing our digital viewing and our digital revenues at pace.”

Channel 4 added it would pay back the furlough payments it received from the government’s coronavirus job retention scheme, amounting to about £1.5m. It has also made a £250,000 donation to the Film & TV Charity’s Covid-19 Recovery Fund to support the sector.

While 2020 was planned to be another year of net investment, Channel 4 admitted that the Covid-19 pandemic has meant that some of this spend has been deferred to 2021. 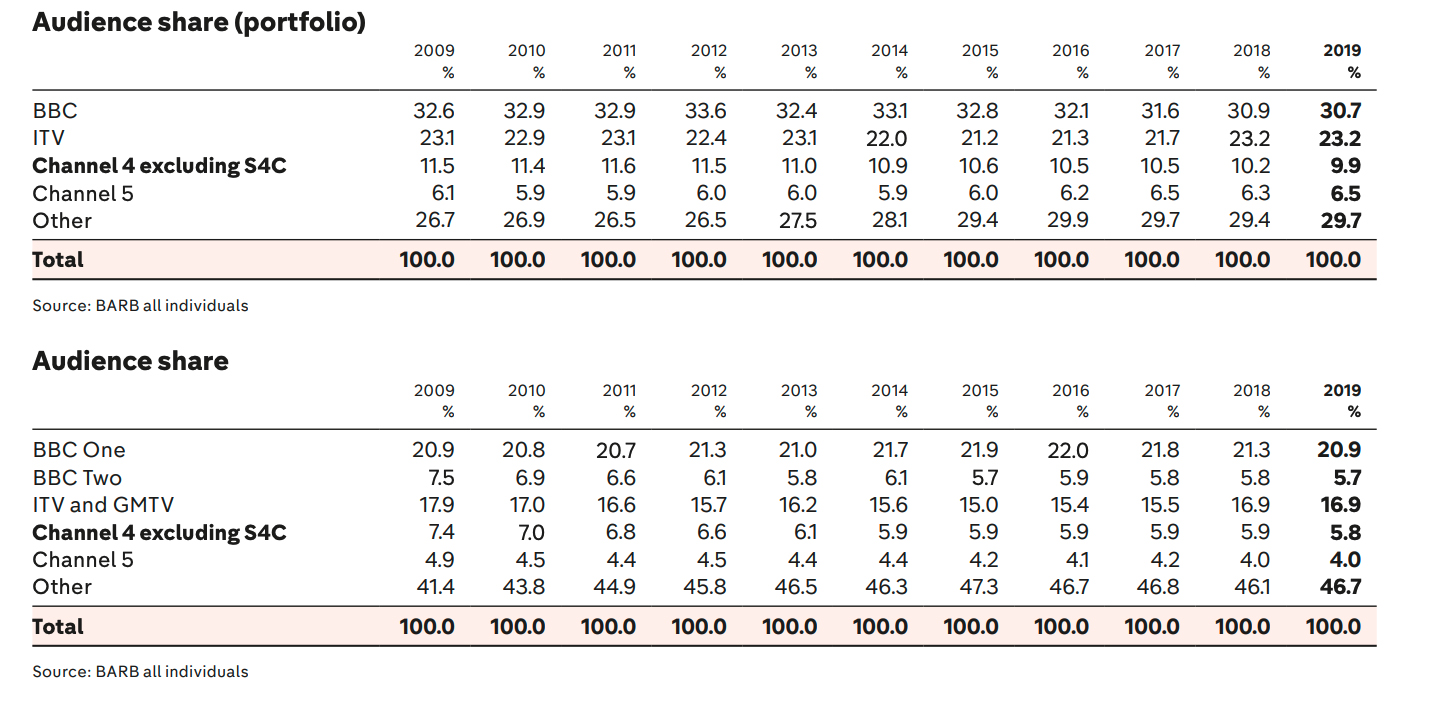 The main channel’s audience performance dipped to 5.8% share of all UK TV viewing, according to Barb figures, fractionally below the 5.9% that Channel 4 had achieved each year since 2014. However, the Channel 4 portfolio as a whole lost share again, dropping from 10.2% in 2018 to 9.9% last year. By comparison, the ITV portfolio audience share has held steady at 23.2%, as did the share of ITV’s flagship channel (16.9%).

Channel 4 also reported a 3% growth in investment in original content to £492m last year, as part of a total £660m in content spend for 2019. The broadcaster touted its investment in critically acclaimed dramas last year, such as Brexit: The Uncivil War, and The End of the F***ing World.

'Things feel like they are rallying': TV adspend set to begin recovery in October