Having announced its first major commercial partnership with Pampers, Channel Mum and Netmums founder Siobhan Freegard spoke to Marketing about her new venture and her plans on working with brands.

80% of babies born today are born to millennials

YouTube is bursting at its digital seams with content aimed at millennials, much of it conceived, presented, filmed, edited and distributed by millennials.

And yet Netmums co-founder Siobhan Freegard spotted a gap in the market. While there is a plethora of video channels focused on subjects ranging from cookery (a la Jamie Oliver’s Food Tube) and gaming to, make-up (Pixiwoo), there is little aimed at new mothers, and particuarly at new, UK-based mothers.

Freegard, who stepped down as a director of Netmums to focus on her latest venture Channel Mum, was struck by the finding that 80% of babies born today are born to millennials. It gave the idea of starting a YouTube vlogging community the impetus it needed.

"To be completely frank, I didn’t know about making videos," she half jokes. "But I do know about mums."

Freegard also knows about brands and accordingly Channel Mum has been built as an attractive platform for those advertisers wanting to reach the increasingly influential millennials market. This strategy gained momentum with this week's news that Pampers is onboard as Channel Mum's first commercial partner.

"A lot of brands now know that mums are wanting videos and that they want to talk to mums on video, but there was nowhere really to do it," Freegard says. "So we went and told Pampers our story and they totally got it, [the notion of] talking to millennial mums at a grassroots level." 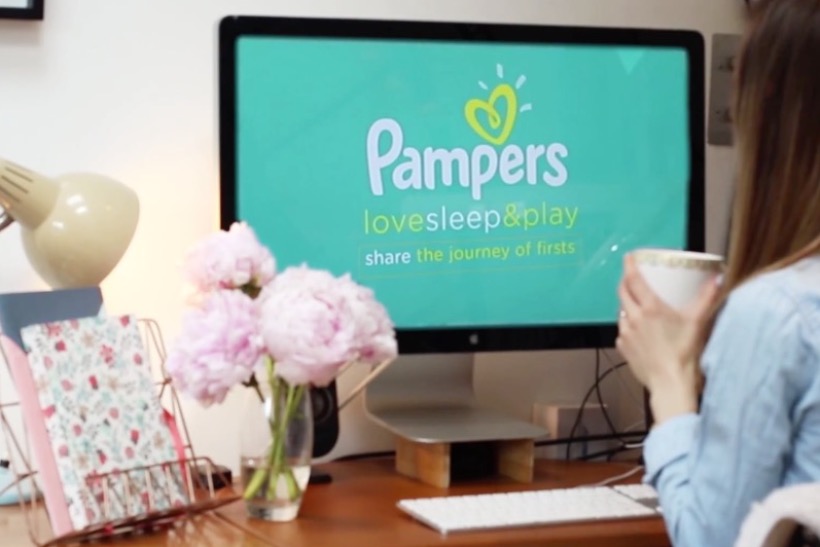 For those concerned that a sponsor's agenda might dominate the content, Freegard is quick to stress that the branding in the Pampers-sponsored video is done "very subtly.".

"It’s real vlogging mums talking about baby firsts," she says. "Our USP in the video is showing mums how you record those moments now that there are so many ways of recording them, with different mums telling their stories.

"It’s very short - less than two minutes and the audience gets to join in [using the hashtab #babyfirsts]."

As well as being Channel Mum's first major commercial partnership, the campaign also marks a first for Pampers working with vloggers.

So, does Freegard think her audience is receptive to brands getting involved with content aimed at mums?

"Mums want to listen to brands and brand messaging," she insists. "Because at the end of the day they are the ones who buy products, with 85% of household buying decisions made by mums.

"They hate being patronised, but if they are talked to in the right way, mums love being given advice and asked for their opinions because they then think that a brand is listening to them.

They hate being patronised, but if they are talked to in the right way, mums love being given advice and asked for their opinions because they then think that a brand is listening to them

"I think what’s nice about branded content is that it’s not an ad, but a brand facilitating or enabling content, which is expensive to make.

"As long as nothing is underhand and is, using the word of the moment, ‘authentic’."

Channel Mum currently has a base of around 50 vloggers after getting hundreds of applications ahead of its January launch, and continues to recruit on a monthly basis via a talent competition like a "mini version of X-Factor".

As well as its deal with Pampers, Freegard is optimistic about partnerships with other companies.

"We’re talking to lots of brands right now," she says. "But it’s not going to be lots of one-off campaigns. "We want to build deep partnerships, so it’s about deeper engagement and saying ‘this is what we stand for’ via a branded content campaign, we’re facilitating that content, helping build that content."

With the Pampers video, Freegard hopes it will generate around 50,000 views by the middle of this week, and garner more as time goes on.

"We want it to be the go-to destination for mums looking for video content," she adds, citing the decline of the communities of the past in which families shared parental duties with grandparents, and how the nuclear family replaced that model.

"Video is like going back [to the old model]. It’s that feeling of watching, listening and learning from a global village."

Why technology has made 'womenomics' more relevant now than ever

Change4Life teams up with Coca-Cola, Tesco and Asda for 'Sugar Swaps' marketing push

It's not just mums setting consumer trends in 2014, says Netmums founder, it's dads too