Brands from Virgin Media on the London Underground to my local barber are giving it away.

Over the past few weeks, I've been pleasantly surprised to find that when travelling on the London Underground, I can still connect to the Virgin Media wi-fi network across 72 connected stations. The surprise is not that I can connect despite a patchy and intermittent service; far from it. In fact, I've found it so good that I'm almost encouraged to take a desk down to King's Cross station.

I'm surprised because there's been a long-standing intention to turn off the tap for non-Virgin Media customers; the idea was that it would be free for London's summer of sport, but thereafter we'd have to pay.

As yet, in mid-October, I've still to see any evidence that this is the case, though a spokesman for Virgin Media was making noises about this as recently as 26 September, and I even found a statement that declares: 'Since the end of sporting events, full free access has been restricted.' This was news to me, given I read that article using the wi-fi on the southbound Victoria Line platform at Oxford Circus.

Whether the paywall goes up next week, next month or next year, I thought it was worth thinking about the feasibility of charging for wi-fi in 2012. In London, we're not short of wi-fi connections, but the Virgin Underground service manages to tick all the major boxes of what you want from such an offering.

There are roughly four things that people want from wi-fi, and the service meets those in spades: it is fast, stable and simple to connect to; but only for the moment does it meet the fourth thing people expect - that it should be free. 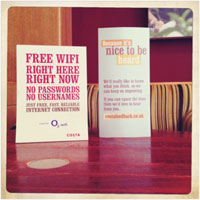 Why is free so important? Just think about the number of other places that will give you free wi-fi because they're selling you something else (coffee, clothes, haircuts, burgers, newspapers ...) and the list grows and grows. Moreover, a lot of those places are the ones you'll stop into on the way to and from other things.

Costa Coffee is not alone. The public perception is that wi-fi in a public space, provided by a business or a brand, will be free. I can't see Virgin Media fighting the gravitational pull of that belief, even with such a robust service across the Underground. 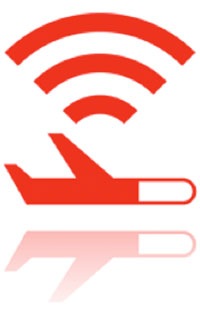 I've been lucky enough to fly out to Oslo a couple of times in the past year with this carrier, and was delighted to find that for the whole flight there was free wi-fi. It's setting the pace for European airlines.

Back when the first iteration of the Starbucks and BT Openzone partnership arrived, there was a convoluted system where you had to tie your Starbucks card to the wi-fi account, and keep a minimum amount of £5 on it ... it's since moved to a completely free model.

Let's be honest, when Esquires in Lewes realises it's a good idea to offer free wi-fi to customers, it has definitely become the market-standard approach.

John V Willshire is the founder of Smithery, an innovation works for marketing and product development. Follow him on Twitter @willsh or at smithery.co/blog

Costa Coffee's growth is down to "reassuringly proud" strategy

Virgin Media ends free Wi-Fi for all on the Tube

Tech: Be spectacular to get noticed

Why retailers should set store by data visualisation