2021 has seen a return to in-person festive activations.

Branston Pickle goes into the postal business for Christmas

Branston Pickle was inspired by the fact many expats in Europe find it hard to get their condiment of choice over the festive period. It launched the "International Pickle Post" to enable people to send a jar of Branston Pickle to loved ones across Europe and bypass the Christmas Post Office queues. The pop-up in Gabriel's Wharf on London's South Bank, also stocked Branston Pickle-themed items. There will be scratch-and-sniff cheese and pickle stamps, limited-edition Branston Pickle wrapping paper and "cheesy" Christmas cards. 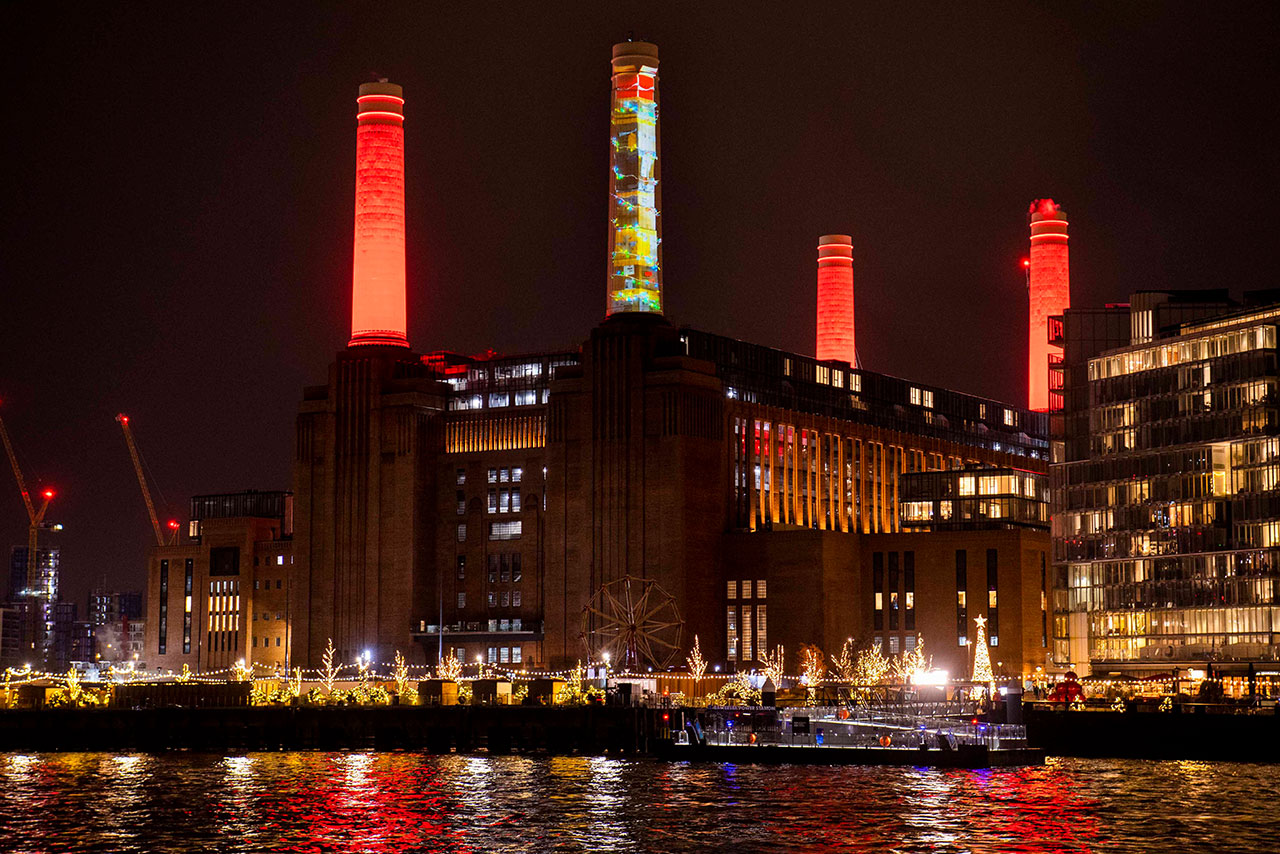 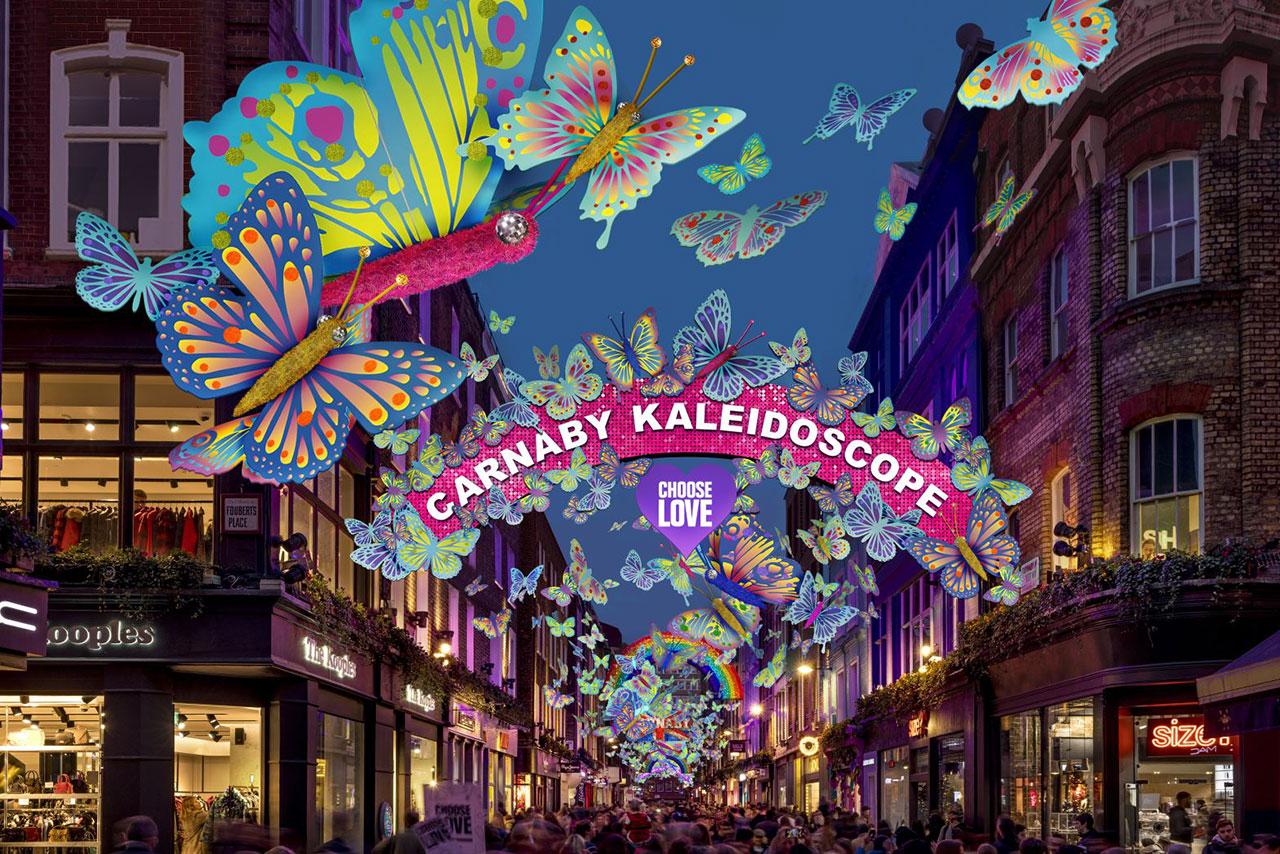 Refugee charity Choose Love, launched its Christmas campaign to provide support directly to refugees across the world. The organisation annually opens a store that allows consumers to buy supplies and services for refugees with the simple concept of "browse the store, choose real products and leave with nothing". This year the shop features artwork and merchandise designed by Lakwena. The charity also worked with London's Carnaby Street for its 2021Christmas installation, which features 600 sparkling 3D and 2D butterflies hand-decorated with reflective wings and bright neon patterns. 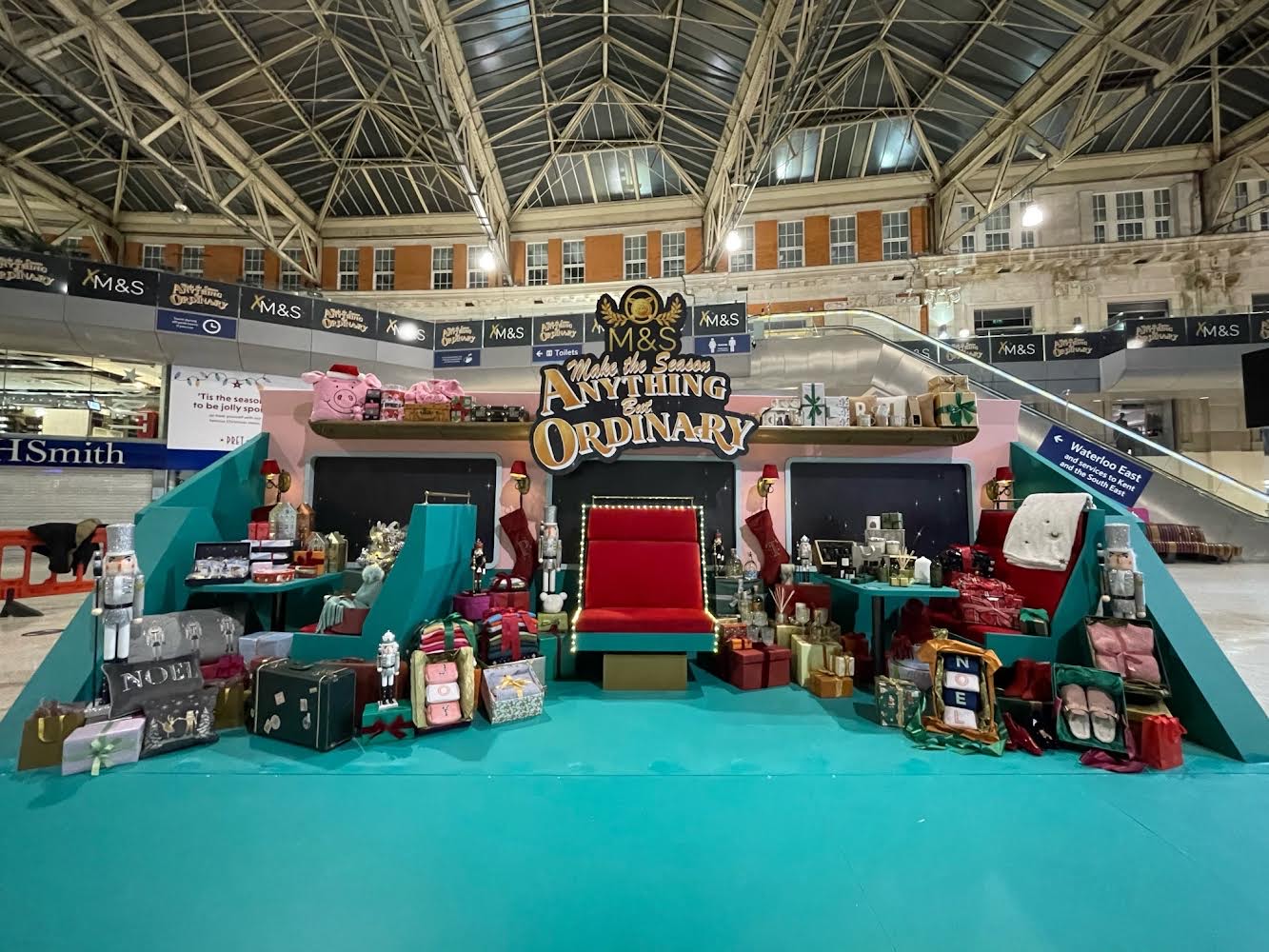 Marks & Spencer showcased its Christmas clothing campaign by ODD with an experiential activation in Waterloo Station. Elements of the TV campaign were used to create motion graphics, which are shown on the station's main concourse, and a series of digital executions. The gifting train prop from the ad's original set has been repurposed for Waterloo station to allow people to physically interact with the magical Christmas dream world from the film. Commuters were invited to explore the train decked out with a range of M&S gifts that had QR codes attached for ease of purchase. Guests could share an image for a chance to enter a competition. 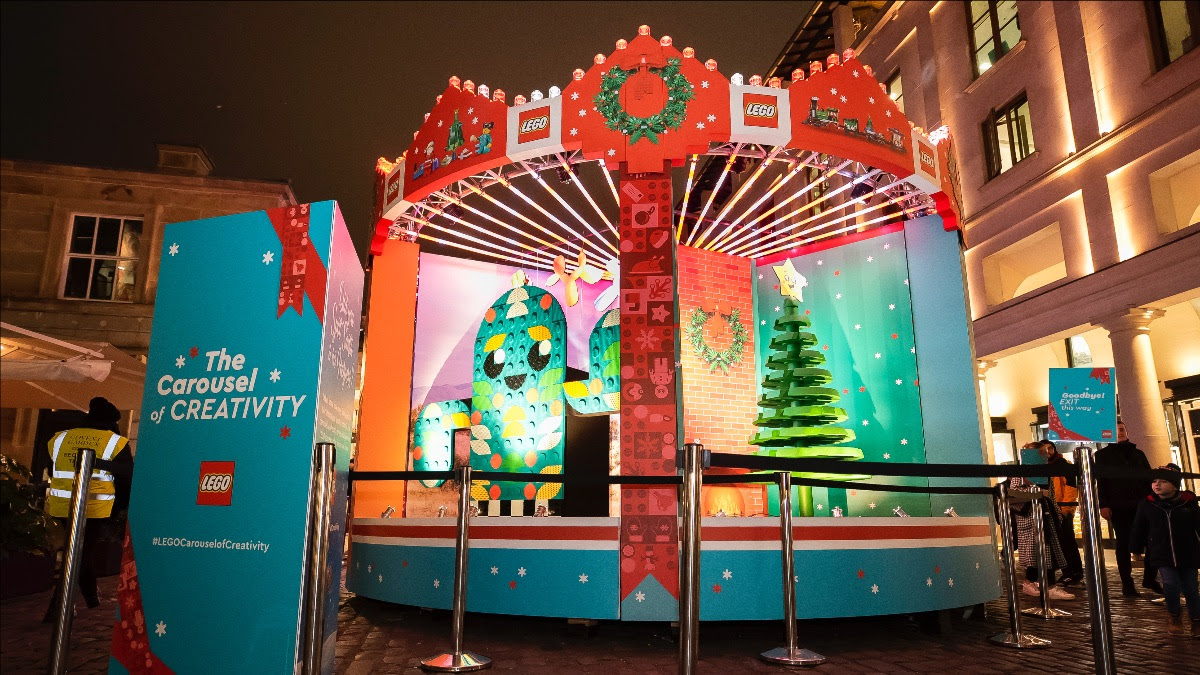 Lego is putting on a festive display in Covent Garden to encourage families to unleash their imaginations. The installation called "Carousel of creativity" is made up of five sections with a character in each. One area will be fitted with a screen that displays creations sent in by fans using the Lego app. 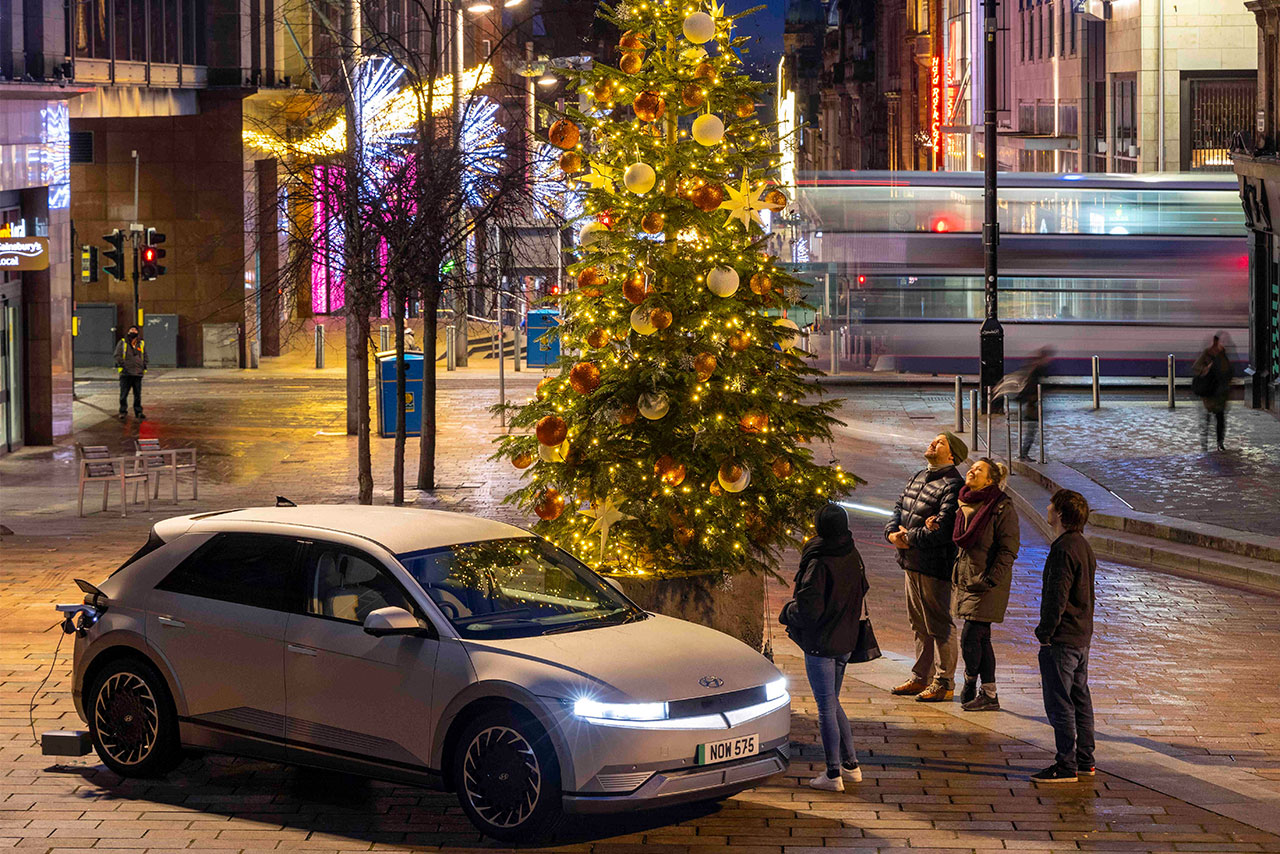 EDF has installed a Christmas tree with lights that change colour according to the pollution levels in Glasgow city centre. The "Christmas tree-v'' aims to make motorists more aware of the impact that petrol and diesel cars have on the environment. The colour-changing lights are powered by an electric vehicle provided by Drive Electric. 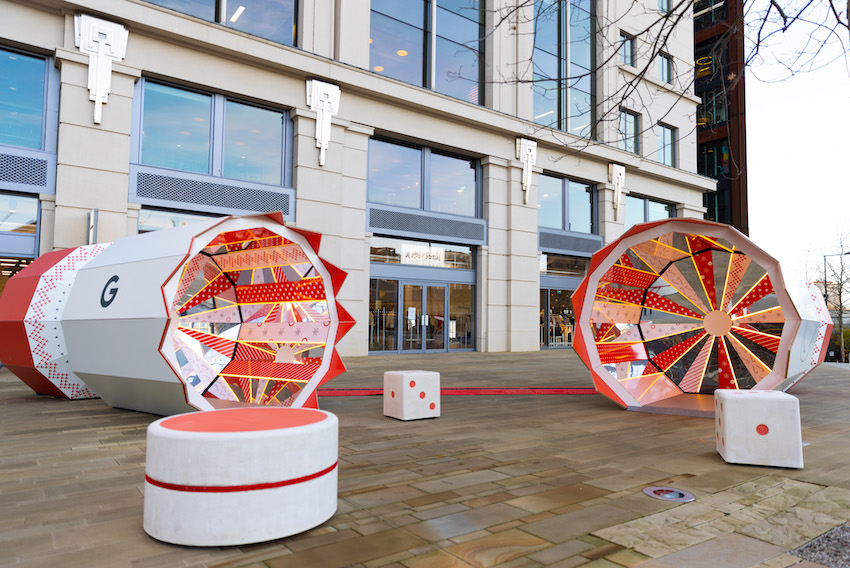 Google has created a festive installation outside its London headquarters in Kings Cross. Passers-by can walk into its giant cracker with each segment measuring nearly five metres in length and two metres in height. Both halves are colourful, with playful graphics, mirrors and lights. 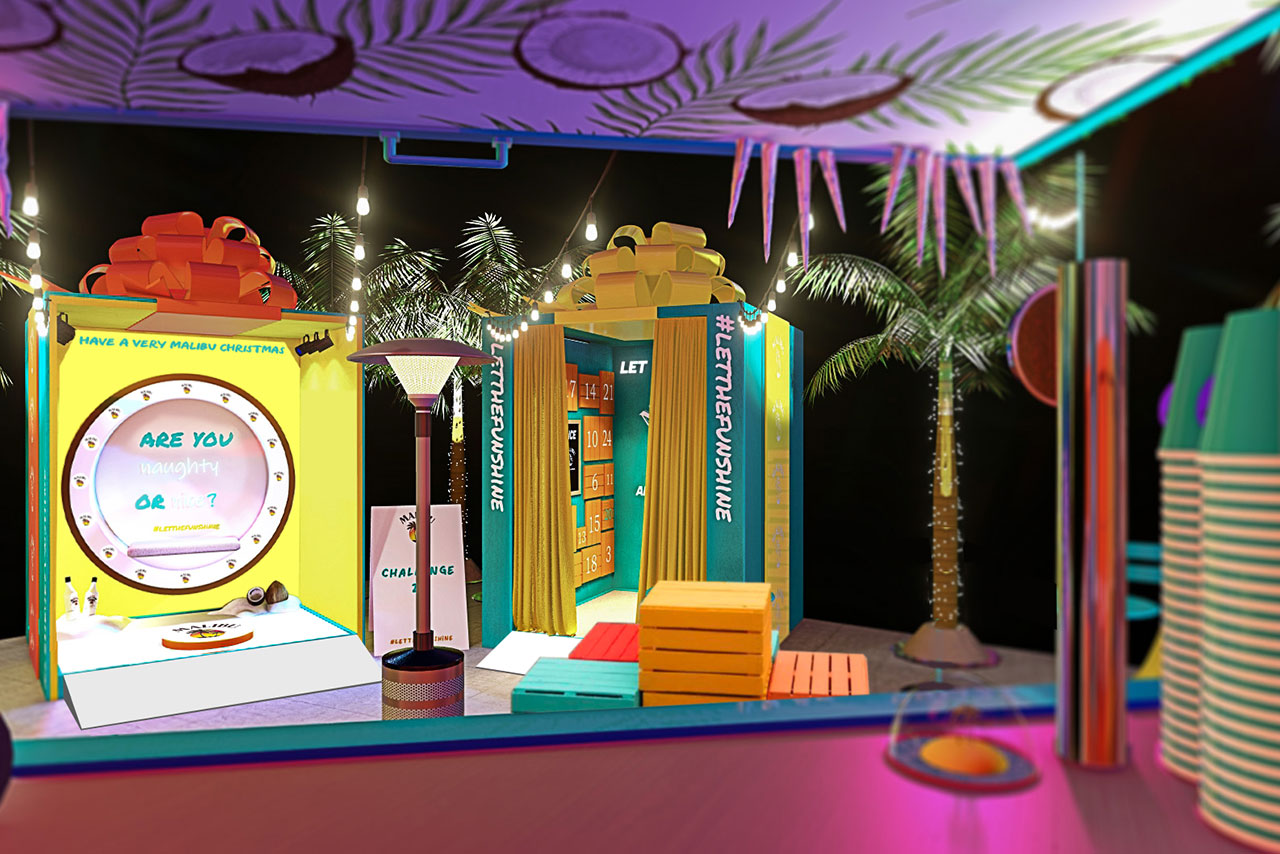 Pernod Ricard's coconut rum brand Malibu is inviting guests to have a "very Malibu Christmas" with festive serves at its winter pop-up. Guests could sample a Pina Colada, Malibu Hot Chocolate or a Watermelon Snow-Jito, before stepping into an oversized advent calendar to find out whether they have been naughty or nice this year. 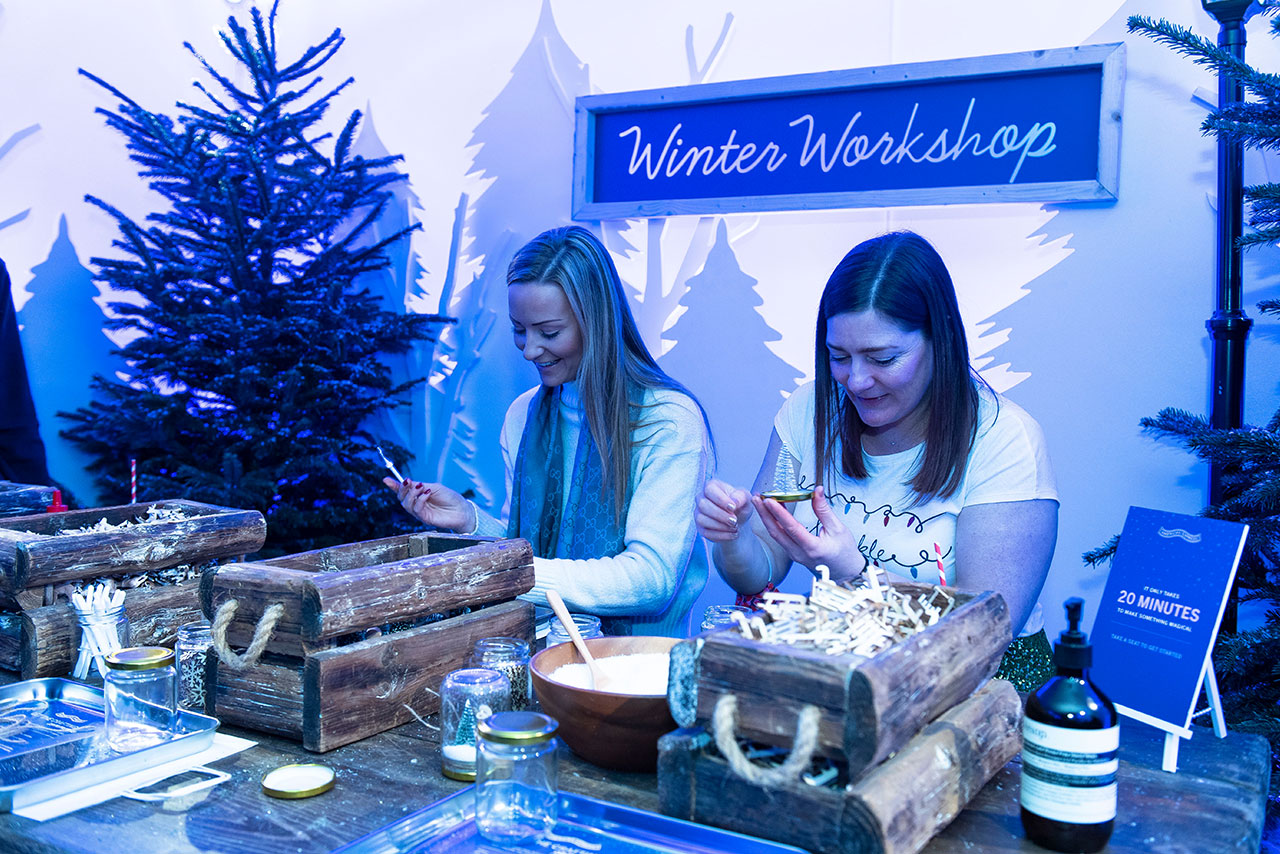 American Express has teamed up with Covent Garden for a winter experience that aims to drive footfall over the festive period. Visitors to "American Express winter world" on Floral Street can enjoy an icy beverage or "snowcone" at The Drift, the lounge's snow-topped bar, receive a gift-wrapping tutorial from an expert, attend a snow-globe-making workshop within the lounge, or snap a festive picture at a Christmas lights experience. 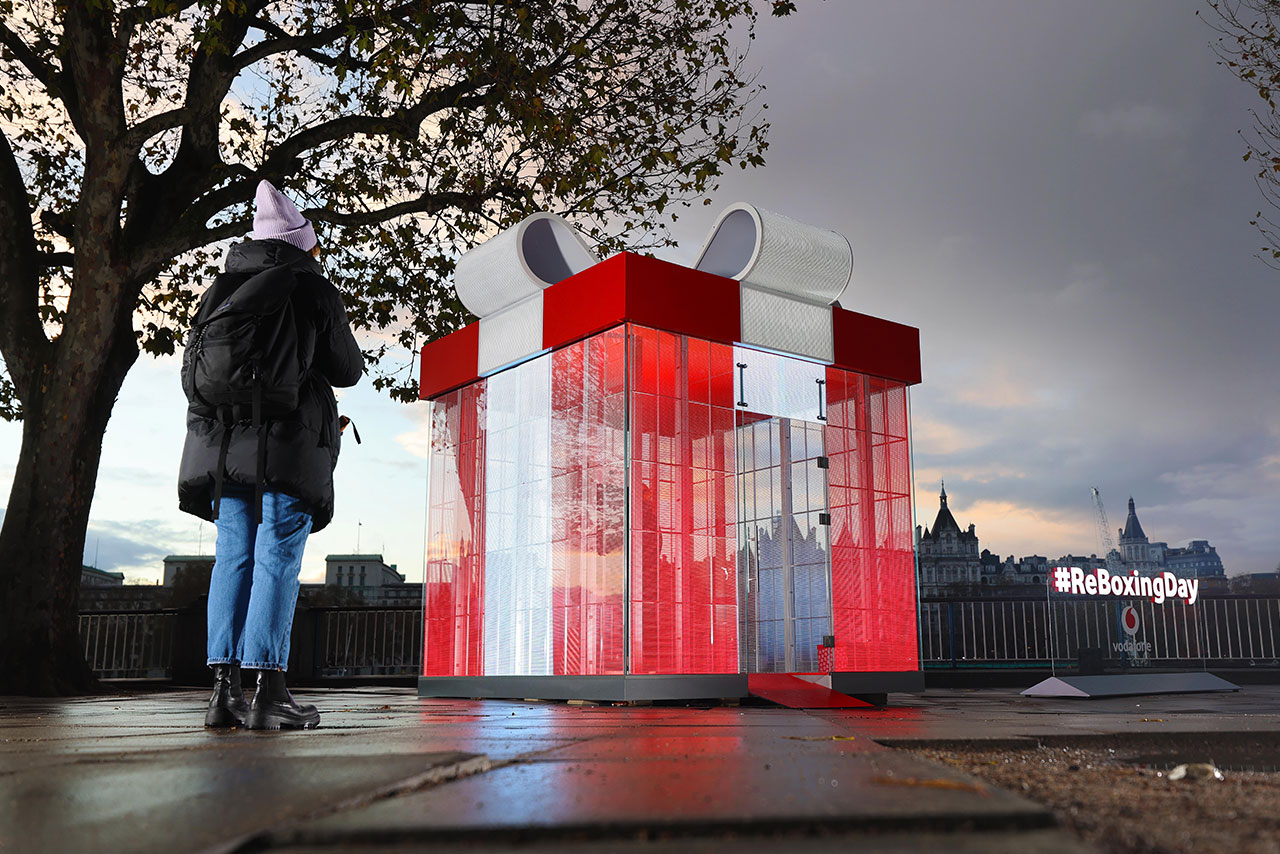 Vodafone launched its campaign to return Boxing Day to its original purpose, as a day of charitable giving by illuminating London's South Bank with a giant LED gift box. The box, constructed of transparent screens, displays user-reactive content, communicating the campaign messages and encouraging passers-by to get involved. 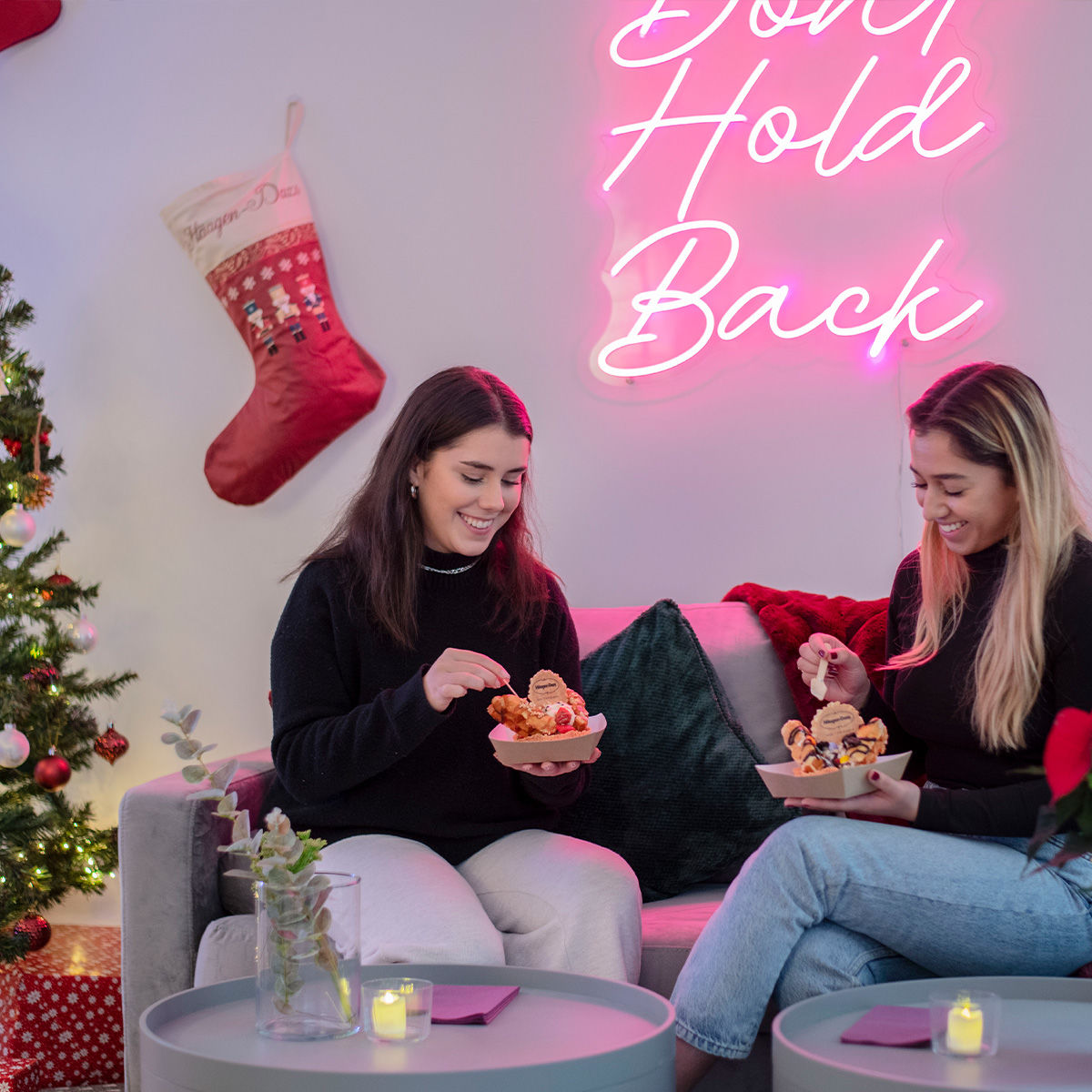 Häagen-Dazs hosted a boozy ice-cream pop-up in Covent Garden to celebrate its two new winter flavours. Visitors to the hygge-esque "Wafflerie" could choose from rum, salted caramel and biscuit, or Irish whisky and chocolate waffle, served with a bubble waffle. There will also be a selection of toppings available. The space will featured warm lighting, soft furnishings and festive foliage. 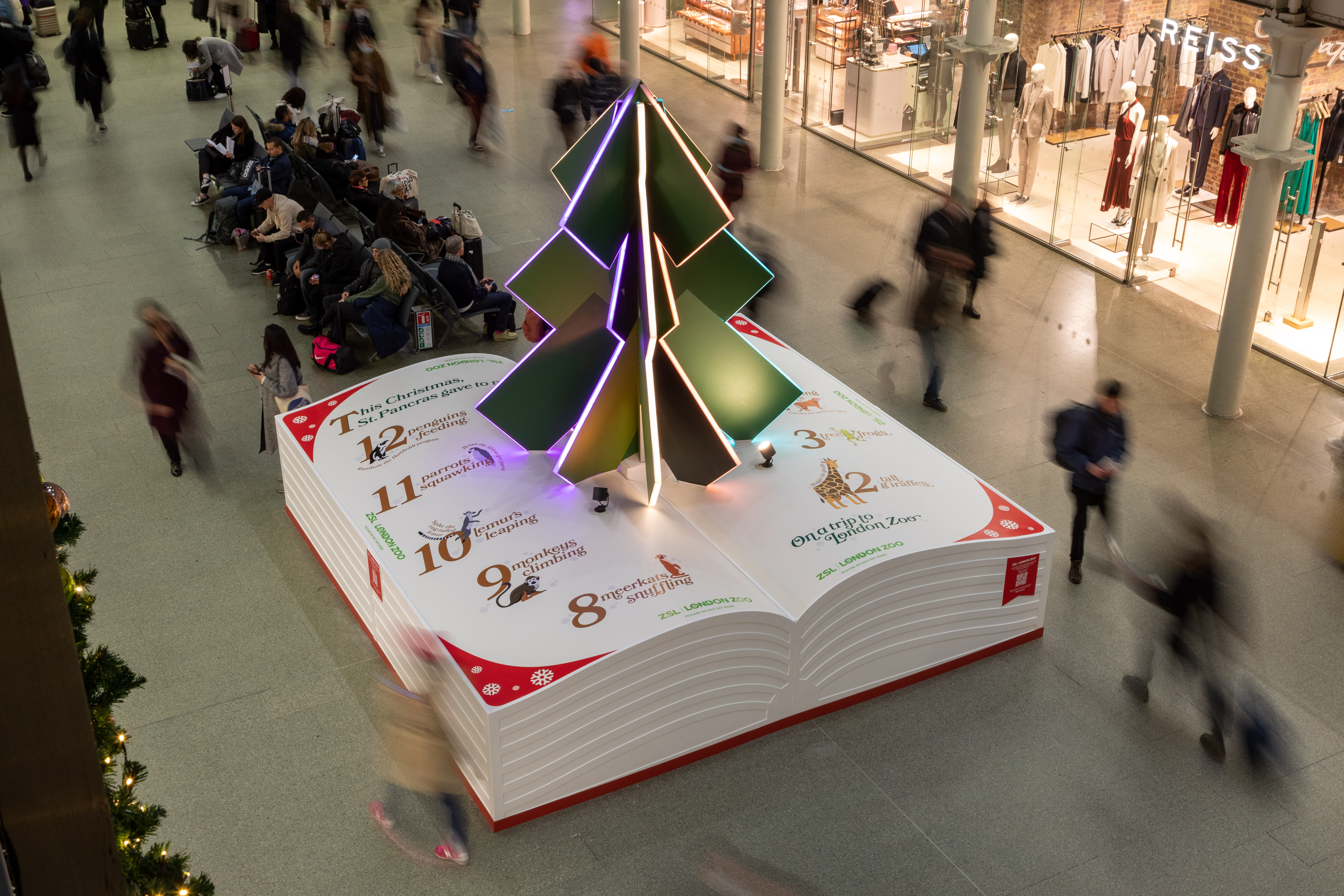 St Pancras International's Christmas tree installation was created in partnership with ZSL London Zoo. During the pandemic lockdowns it kept tales from the zoo alive through its Tails from the Zoo bedtime story series. The tree, inspired by traditional story books, features familiar characters that have inspired children's stories, including lions, tigers and giraffes. Visitors to the station will be able to enjoy the full effect of the lights and sounds of the Zoo's animals as part of the display. Additional animals are also on display around the station, appearing as if they have leapt from the pages of the story book. 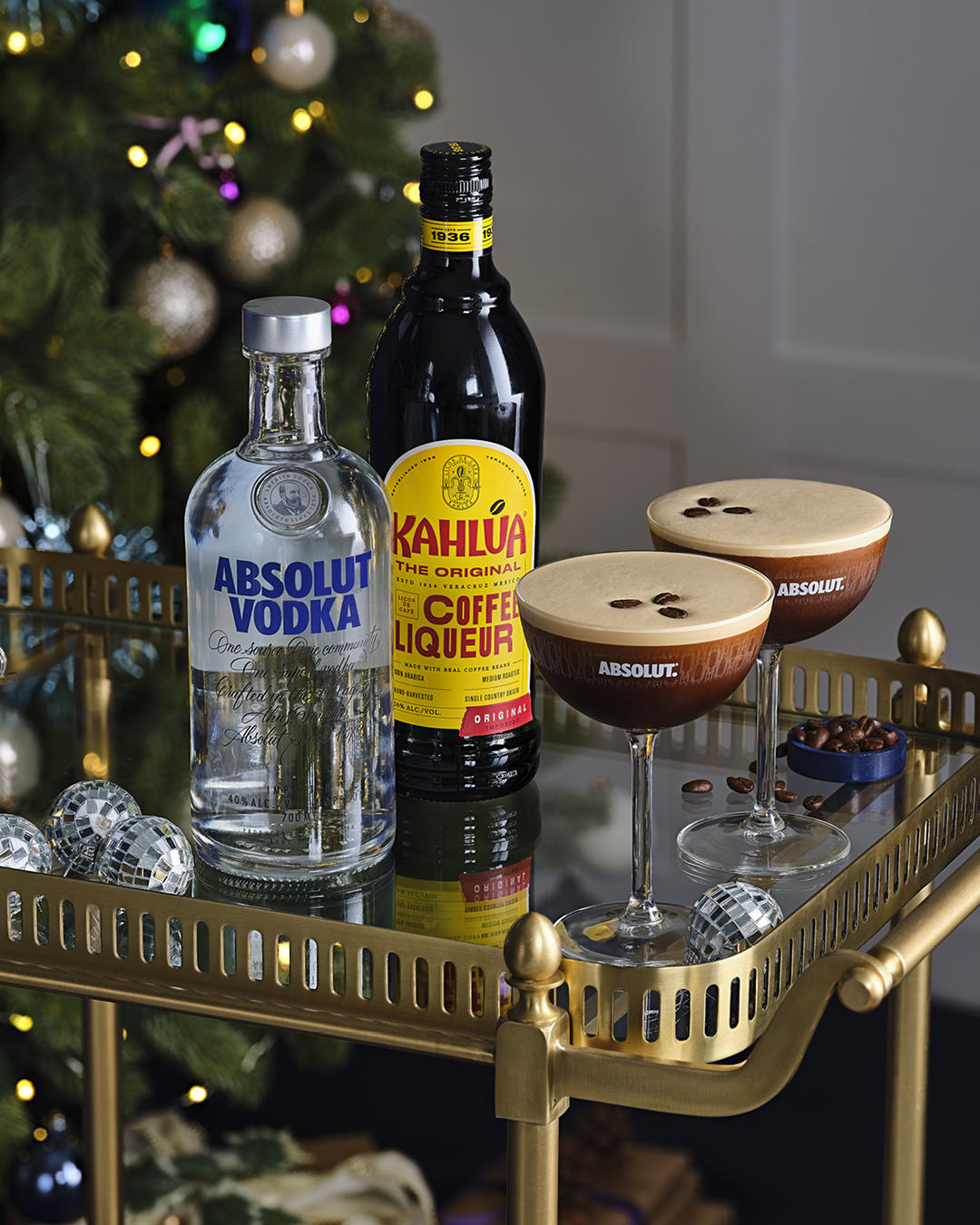 Pernod Ricard UK has been offering free online cocktail masterclasses for its leading spirits brands including Absolut, Beefeater, Jameson and Havana Club. Throughout November and December, the 75 masterclass, each 30 minutes long, have been hosted by Pernod Ricard UK’s ambassadors. As well as giving step-by-step instructions on how to create the cocktails and providing helpful tips and tricks for making them extra special, the masterclasses included festive home hacks such as Christmas cracker- and wreath-making and bauble-painting workshops. Consumers could sign-up through its ukchristmascocktails.com website.

Five brand experience trends to look out for in 2022