Created in-house by Our Streets Now and Plan International UK, “#CrimeNotCompliment” showcases that one in three girls in school uniform has been sexually harassed in public through anonymous experiences of public harassment.

“I got harassed so much on the way to school I had to change my route,” one ad declares, while the other recounts experiences of being “followed, harassed [and] flashed”. 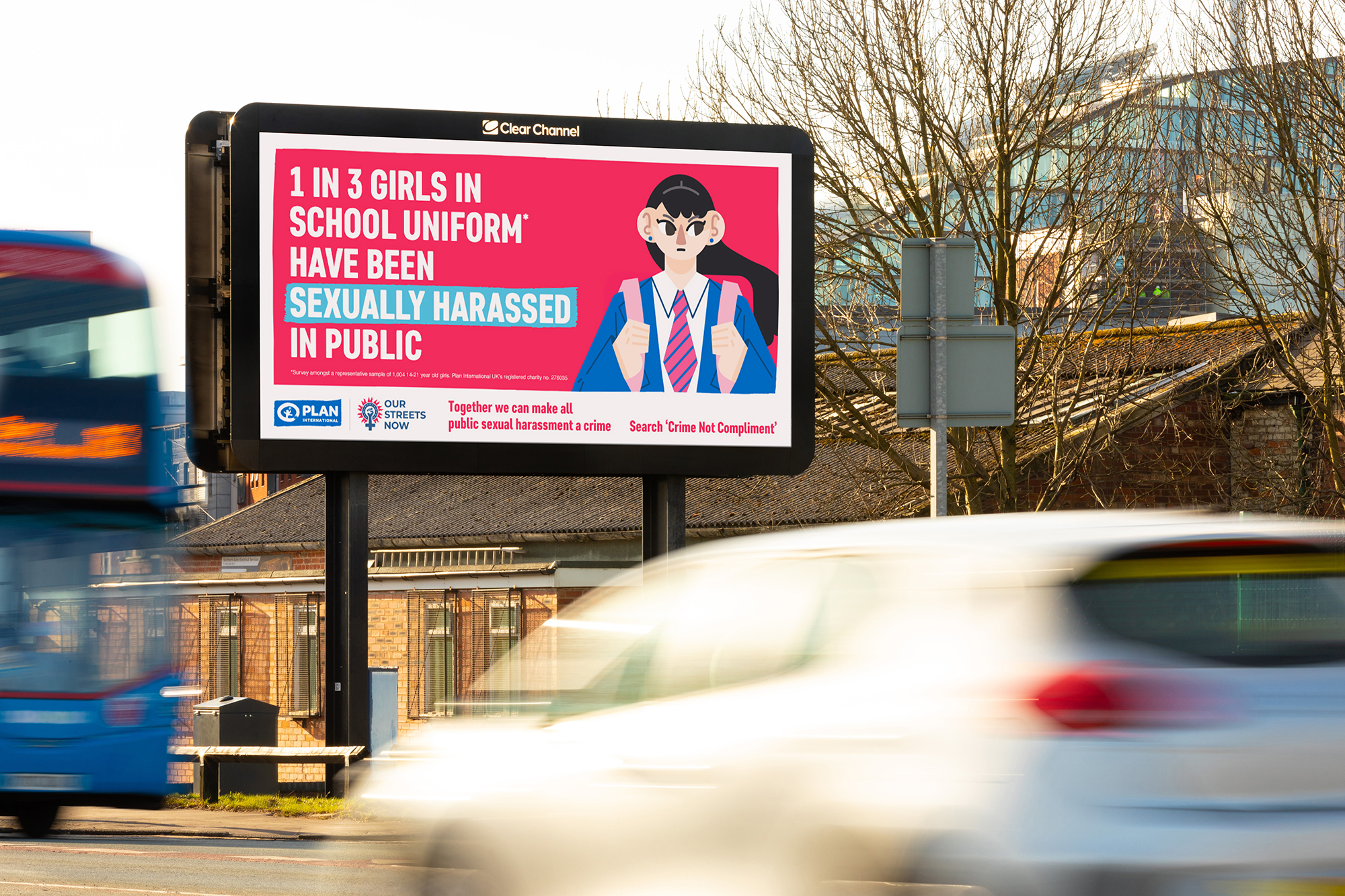 “These brilliant, thought-provoking designs highlight the true extent of public sexual harassment, which blights the lives of so many young women and girls in the UK today,” Rose Caldwell, CEO of Plan International UK, said.

“All women and girls should feel safe in public spaces, yet they still continue to face harassment every day – they’re being followed, shouted at, touched and groped – and it needs to stop.”

A survey by Plan International UK – which was based on the experience of 1,000 girls and women between the ages of 14 to 21 in the UK – found that 94% of girls and women in the UK think public sexual harassment should be made illegal.

Four in five (80%) parents in the UK worry that their daughter will experience public sexual harassment during her lifetime. 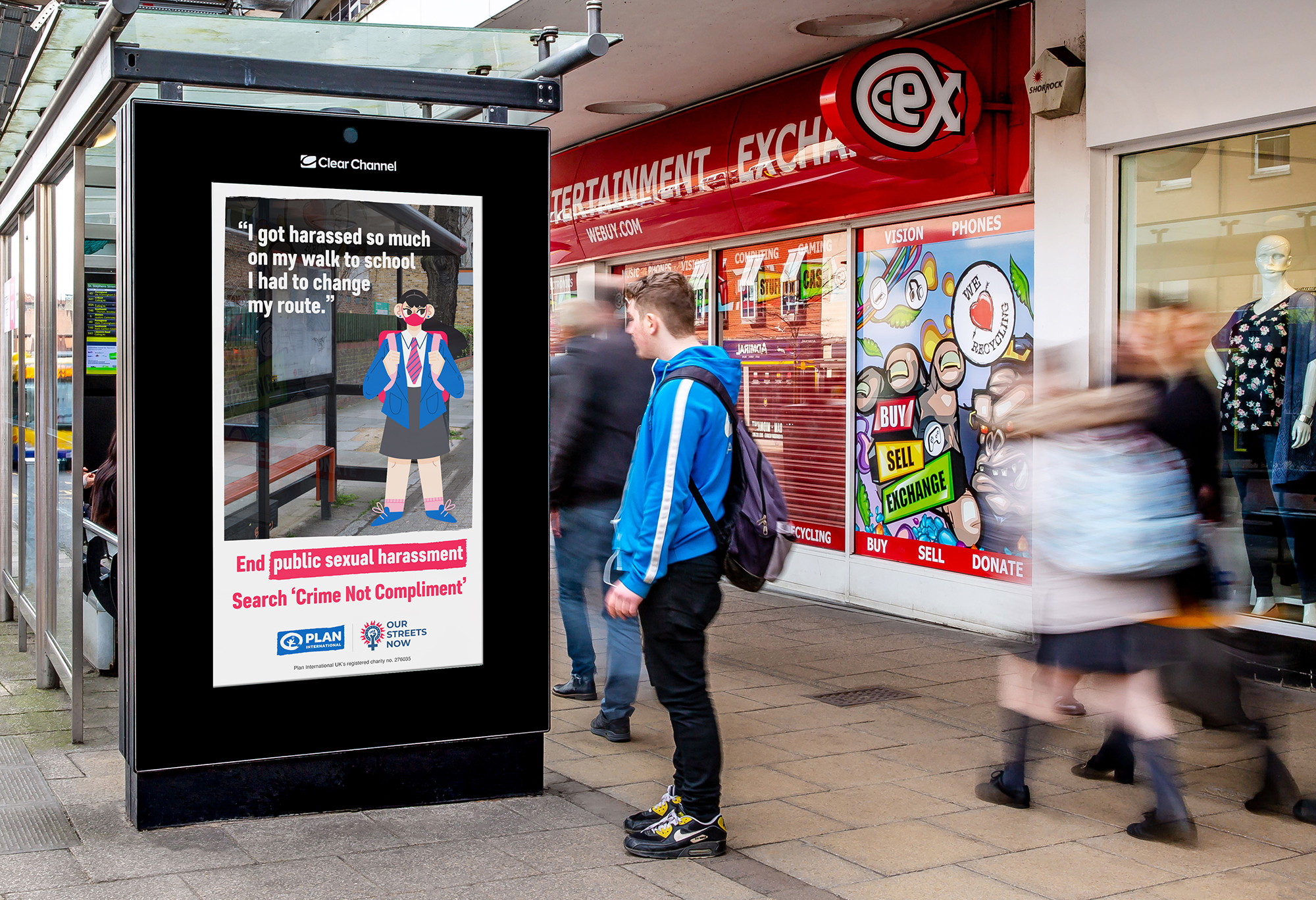 Caldwell continued: “That is why our #CrimeNotCompliment campaign with Our Streets Now calls upon the government to establish a clear law that criminalises all forms of public sexual harassment and protects the rights of girls to a life lived without fear.

“Through legal change we will start to see a cultural shift, and, together, we can finally end the scourge of public sexual harassment.”

Founded by sisters Gemma and Maya Tutton, Our Streets Now has been campaigning to bring an end to public sexual harassment since 2019, and launched “#CrimeNotCompliment” alongside Plan International UK in November last year.

Sravya Attaluri, creative director at Our Streets Now, said: “Art and illustration have been at the core of Our Streets Now’s campaign work – we believe in the power of art to motivate, educate and empower.”

Attaluri said that the campaign uses “bright positive colours” to highlight the “strength, power and sense of community among survivors of public sexual harassment”. 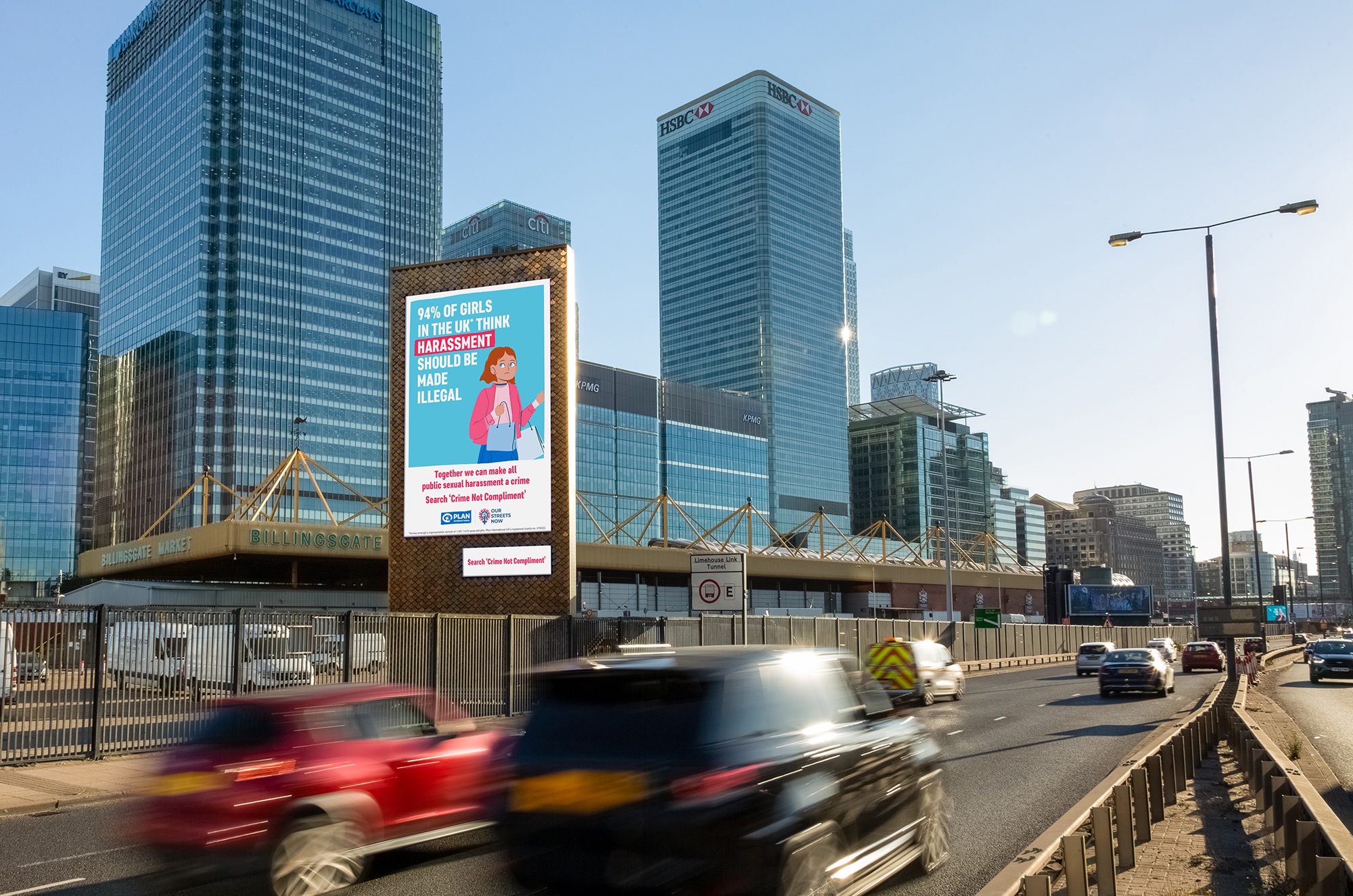 They continued: “We hope that these images will help start a conversation and ultimately change the culture around public sexual harassment in the UK.”

Earlier this month, creatives Sophie Szilady and Sophia Johnson made a project called “Give her space” to speak out against systemic sexual harassment, following the death of Sarah Everard

Martin Corke, chief marketing officer at Clear Channel UK, said: “At Clear Channel, we recognise that public sexual harassment is a serious, on-going issue and we’re keen to play an active role in driving those much-needed public conversations and changing unacceptable behaviours to make our communities safer for everyone."

Measuring gender equality is not enough – it's time to act

Struggling mums see the funny side in Maltesers ads