Cobra Beer, the Indian beer brand owned by Molson Coors, is launching a £4m marketing campaign in a bid to climb from 30th biggest-selling beer brand in the UK, into the top 10.

The campaign, created by Beattie McGuinness Bungay, showcases Cobra as the choice beer to accompany Indian food, while focusing on its heritage and its taste.

The TV ad features a train travelling through India, showcasing the vibrant Indian culture and country, through the people travelling on the train, and the landscape the train passes through.

It uses three new Indian talents touted for success: B.L.O.T., a pair of filmmakers, producers and DJs; Manou, a street fashion blogger; and Vandana Verma, a food and lifestyle writer.

Previous work for the brand used the messaging, "Less fizz to go perfectly with curry".

Lord Karan Bilimoria, founder and chairman of Cobra Beer, said: "The new advert tells our story very well, presenting a journey that continues to this day.

"We have a beer that has won multiple awards through the years, and in 2012, we will make great strides for Cobra to become a top 10 beer brand in the UK.

The ninth and 10th biggest selling beers in the off-trade, according to Nielsen, are Peroni Nastro Azzurro and San Miguel, both with sales of £70.2m, while the top seller was Stella Artois with £500.3m. 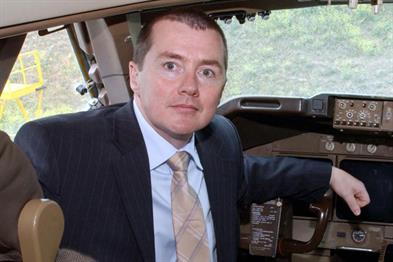 Walsh said the expected 8% hike in Air Passenger Duty (APD) in April will deter visitors to the UK.

British Airways has paid £40m in sponsorship money to be the official airline partner of the London 2012 Olympic Games.

Walsh told the Guardian: "We're spending billions on the Olympics. It's going to create a great showcase – and then we undermine it by raising APD and keeping people away."

APD is set to rise by 8% in April this year, which will be announced in Chancellor George Osbourne’s budget. Current rates of APD are £12 per passenger for a short-haul flight and between £60 and £85 per person for a long-haul flight.

The tax increases announced in November last year led to an unlikely partnership between BA, Virgin Atlantic, easyJet and Ryanair, who united to lobby the Government together and urge it to scrap APD due to its "negative" impact on the economy.

Yesterday, at the announcement of IAG's financial results, Walsh said BA had paid "almost £500m in APD" in 2011, and that as a result of the latest increase, the airline reduce the number of new jobs it creates in 2012 "by around half".

However, IAG warned the Olympic Games could impact BA's traffic this summer.

A spokesperson for the company said: "While the Olympics will be positive for the long term position of London as a global destination, past experience in other host cities suggests that demand could be dampened during the games."

Insects and Chang Beer on menu at London pop-up