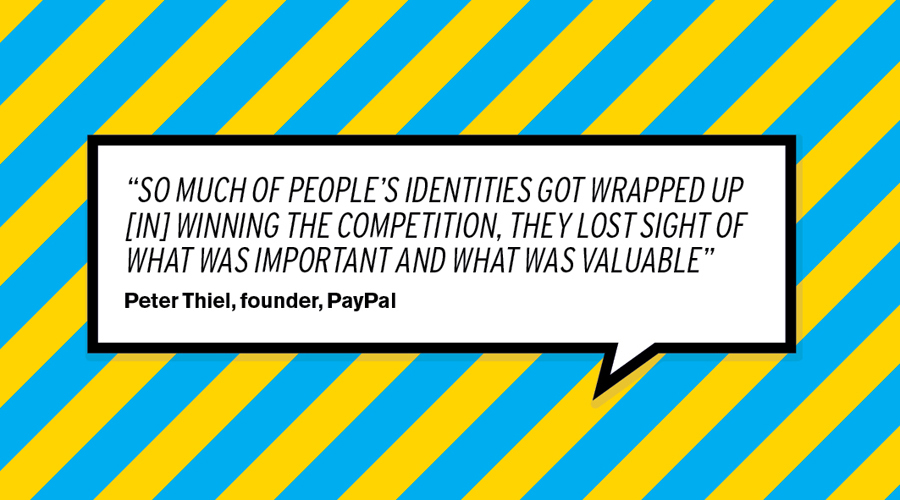 Competition has long been a lynchpin of brand marketing. Historically, many a marketing career has been built upon stealing market share from direct rivals, and many a marketer can be accused of having an almost obsessive eye on their closest competitors. But as digital disruption pervades, meaning any given brand is just a start-up away from abject failure, focusing solely on the immediate competition is brand suicide.

Peter Thiel, the founder of PayPal and Founders Fund, recently dedicated an entire lecture at Stanford University to the futility of competition. Competition, he argued, is not a virtue, but the antithesis of capitalism, because it erodes profits and crushes margins to the point that no one can innovate.

"There is often this question about competition as a form of validation," he said. "But when we go for things that lots of other people are going for, it’s not that there is wisdom of crowds, it’s not that lots of people trying to do something is the best proof of that being valuable… when lots of people are trying to do something, that’s often proof of insanity."

It’s a significant shift in thinking for brands and business leaders alike. Ditching the unerring focus on competition offers the opportunity for both personal and professional liberation. As Thiel
advises: "Don’t always go through that tiny little door that everyone is trying to rush through, maybe go around the corner and go through the vast gate that nobody is taking."

Watch: 'Too many marketers are obsessed with the size of their budget'

Boots takes #SpecialBecause campaign to the streets for Christmas