But movie parody is 'through the roof' in short-term impact, according to System1 testing.

When the Conservative Party posted a video earlier this week spoofing the famous scene in Love Actually in which Andrew Lincoln’s character Mark confesses his love to Keira Knightley’s Juliet through a series of large cue cards, reaction was predictably divided along political lines.

Analysis from System1 found that the short-term impact of the film was off the chart – something that it said was due to both the highly positive and negative emotional reactions the clip prompted from viewers.

Using its Ad Ratings system, System1 found the film scored a "spike" rating – indicating short-term sales impact – of 1.62, which it described as "through the roof". Any spike score above 1.2 is regarded as high.

But in terms of long-term brand-building potential, the ad was found to among the worst-performing of the year, with a score of one on the "start rating", indicating long-term growth. One star is the lowest possible score, with 5.9 being the highest.

Jon Evans, chief marketing officer at System1, said: "Political ads are always divisive and this one’s no exception – how people feel about it is tied to how they feel about Boris, Brexit and the election as a whole.

"The figure to look at is 'spike' – our predictor of short-term action. It’s massive and suggests that the ad will prove a success in galvanising any supporters who’d stopped paying attention. But with such strong negative as well as positive response, it’ll do the same for the opposition too."

In what should come as no surprise for a politician who was sacked in 1988 as a journalist at The Times for plagiarism, it appears the Conservatives took inspiration for their film from Labour’s Dr Rosena Allin-Khan, who posted her own Love Actually spoof in late November.

Boris Johnson copied my #LoveActually video but we can make sure more people see my version today - it contains key Labour pledges!

The Times yesterday endorsed its own disgraced former employee to be prime minister.

The party has not covered itself in glory this week on the advertising front. An investigation this week by non-profit organisation First Draft found that a massive 88% of Facebook ads paid for by the Conservatives at the start of December contained misleading claims, whereas First Draft said it could not find any misleading claims in ads from Labour.

Elsewhere, Labour this week posted a video of leader Jeremy Corbyn, fireside, responding to a series of "mean tweets" written about him – although the party chose to avoid those accusing him of antisemitism or being a threat to national security.

The Liberal Democrats, meanwhile, have tapped into the unavoidable reality that dogs are far more popular than any politicians with a canine-fronted ad, created by Neverland. 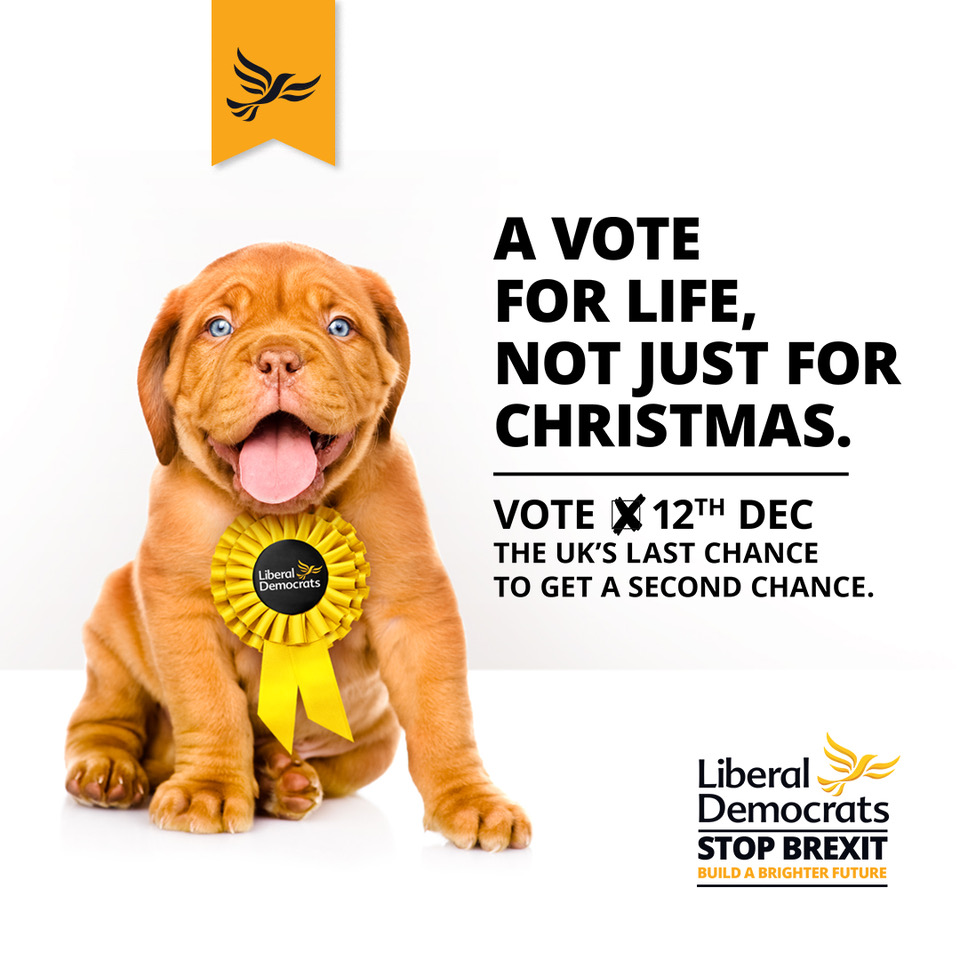