While there is little clarity on when the effects from the virus will clear, agencies expect demand to be suppressed temporarily.

To try to manage the flux caused by a rampaging novel coronavirus (nCoV), brands and marketers will need to be flexible and nimble with their plans, as China seeks to mitigate the impact of this serious illness. As hundreds of people are hospitalised or confined to their homes, agencies and brands will need to recast their plans to manage in this new, stressful environment.

According to reports circulated by leading agency networks and obtained by Campaign, the impact on consumption, ad budgets and consumer sentiment is expected to be suppressed, and will be 'released' later in 2020 when the decimation caused by nCoV dissipates. However, there is little certainty yet to exactly forecast when this virus will disappear, and companies can expect to deal with a fluid market for several months more, these reports note.

For now, the nCoV epidemic will leave a huge impact on the economy as well as consumer behaviours in the short term. Looking back to quarterly GDP growth in 2003, the SARS outbreak dragged down GDP growth rate by about two percentage points, and a Publicis Media report forecasts a drop of about 1% this time. 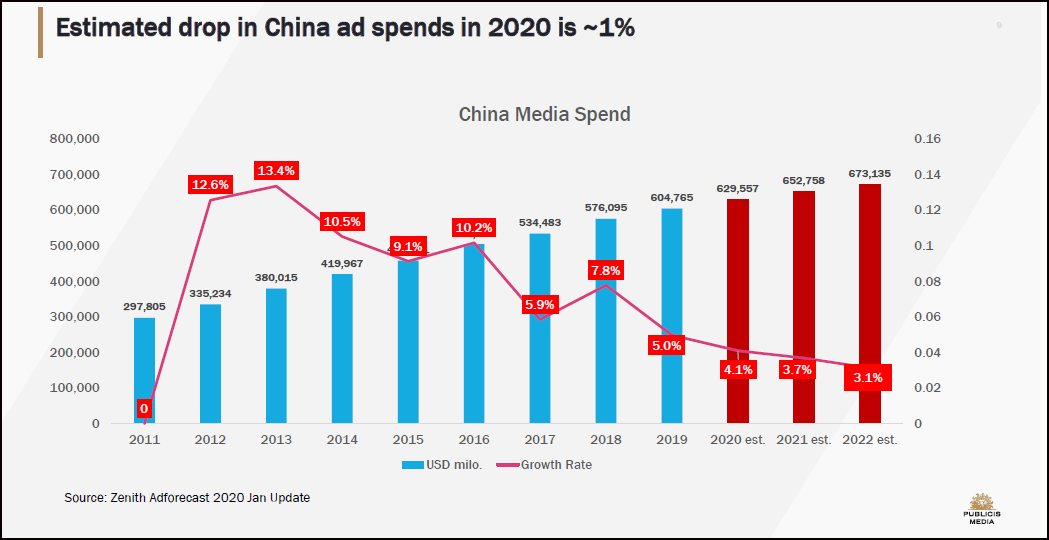 Transportation, accommodation and catering industries were the most affected industries in 2003. Their growth in Q2 slowed by over 30%. However, these industries quickly recovered and bounced back to normal in Q3.

According to the Publicis document, short-term impact will be more concentrated, and overall 2020 outlook depends on how long the outbreak lasts. The network estimates that "with government stimulus and brands continuing to invest for the long term in China, Q3 and Q4 will expect to see rise in consumer optimism (depending on how the outbreak is contained)" However, the network warns that if this outbreak lasts longer (beyond Q2), then economic impact can be worse and brands must review plans.

As people are stuck at home – or in hospital – battling the disease, marketers need to keep a close eye on changing trends in media and advertising. A GroupM document points out that in-home media such as TV received more than 20% increase in rating compared to the last CNY.

Dentsu also points to similar trends. The network indicates that online media is "thriving and adapting" to this challenging time. Even as outdoor media encountered order cancellations and cinema receipts withered, with all seven movie releases scheduled for for CNY canned, online video and news thrived.

Dentsu, meanwhile also warns that in terms of ad spending, retail and tourism might be influenced most by the epidemic, while categories with the biggest spending, such as pharma and food & beverage, should be less affected.

CCTV, PSTV (provincial satellite TV), as well as IPTV/OTT are seeing strong ratings. Especially for PSTV, there was a 40% increase in ratings during prime time. From an audience angle, young people (aged 15 to 44) watched more TV during this year's CNY holiday period. While this is an immediate opportunity, this viewing pattern will change as the intensity of the epidemic lessens over the next few months. 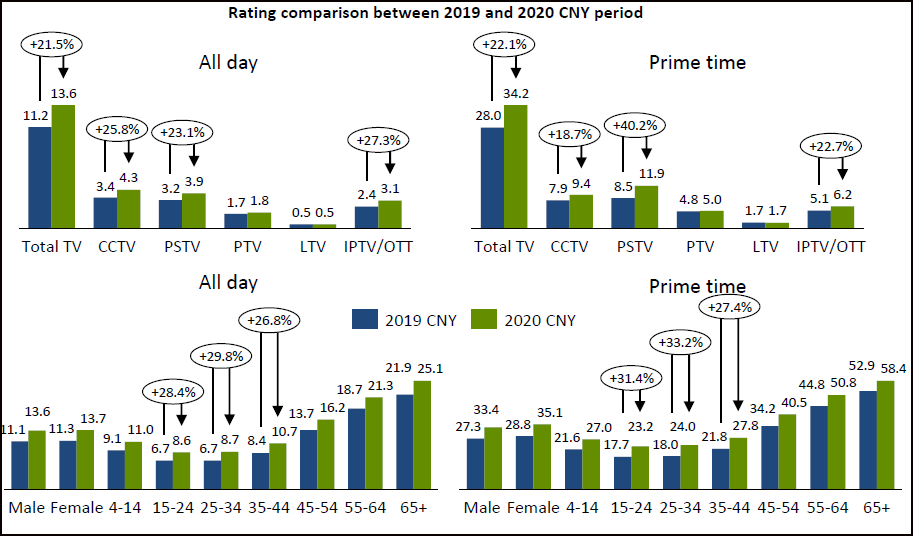 According to a Publicis report, meanwhile, "digital media saw an uplift during the initial period with gaming and video apps hitting new download volume." For example, Glory of Kings had nearly 2.4 billion of cash flow on Jan 24 and one of its key competitors, Onmyoji ranked third among the most popular iOS apps.

"As the usage of smart TV increases, service/device providers are considering an increase in membership. Over the CNY-epidemic period, OTT device providers such as Changhong launched special services and provide more entertainment programs to grow membership."

In these challenging times, it is important to continue capturing consumers’ attention, GroupM's document says. "Past experience tells us SEARS [SARS] did suppress the consumption in the short term instead of diminishing it," its presentation states. "The demand for consumption will rebound shortly after the epidemic."

As China recovers from NcoV, according to these reports, brands need to work with agencies to capitalise on this rebound by locking in premium media resources. Their efforts are expected to be aided by the government's policies to boost the economy and consumption. And hopefully as nCoV is finally banished, China's consumption engine – and everything it drives – can purr again.

Is Facebook coping with the 'steady wave' of COVID-19 misinformation?

How should brands handle comms during the coronavirus crisis?