Carlsberg and Foster's have moved in different directions recently, but both are acknowledging reality.

The way beer is advertised has been transformed in recent years. Partly due to legal restrictions, but also because of the threat that the craft movement has brought. And after some failed marketing attempts, it’s now finally bringing the best out of some of the big beer brands.

In the 1980s, beer advertising seemed to be better than the TV programmes that surrounded it. Obviously, I wasn’t interested in drinking (yet), but so many iconic campaigns are embedded in my memory – from "I bet he drinks Carling Black Label" and "Like the Murphy’s, I’m not bitter" to Heineken’s "Water in Majorca" and John Smith’s flat-capped chaps in The Three Ferrets pub.

Beer advertising at that time did wonders for differentiating brands with products that were pretty much the same and – although it’s subjective – not very good. It was creative artifice at its best. Massive, expensive, over-the-top ad campaigns for XXXX, Carlsberg and Carling gave each real distinction, but I doubt anyone could taste a difference.

But, recently, everything has changed. The rise of craft beer has put the focus back on product. In his book Business for Punks, BrewDog founder James Watt outlines his vision for growing a brand, switching efforts from advertising artifice to a focus on the product and using fans to spread the word.

Isobel has, in fact, worked with BrewDog over the past couple of years on advertising projects, but in non-traditional ways, without artifice and with a clear focus on product.

To begin with, mainstream brewers pretended that craft wasn’t a big deal. I’ve been in meetings with big beer brands that told me that, despite all the fuss, craft is only 2% of the UK market and it will always be niche: "Nothing to worry about."

Well, that may have been true a few years ago, but UK trends are following those in the US, where craft now makes up a third of beer sales. And the big brands are reacting.

Carlsberg was perhaps the biggest casualty. It was dropped from Tesco to make room for more interesting varieties and sales plummeted. Going back to its Danish roots with the branding and communications stemmed the flow to a certain extent, but more needed to be done.

Recognising that its beer had been repositioned as tasteless lager by the new wave of more hoppy, powerful IPAs and pale ales, Carlsberg has taken it on the chin and publicly changed the recipe. It has even admitted in its latest ad campaign that it could no longer claim to be "probably the best lager in the world".

And, in a full show of self-deprecation, it has produced a film showing staff reading cuttings and negative Twitter posts about the beer (an idea that may well have been inspired by BrewDog).

It’s a complete turnaround of tactics and feels like a last-chance Hail Mary to stem the brand’s decline. All driven by the craft movement.

A few years ago, Foster’s reaction to the craft trend was to add the word "crafted" to its packaging. I could almost imagine the decision being made in the board meeting: "Yep, that should do it."

But, a couple of years on, it has reacted in a far more honest, positive and "Foster’s" way. It has recognised that it’s at the opposite end of the market and is celebrating the fact by bringing back Brad and Dan’s "Good call" campaign and taking the piss out of craft beer drinkers with its "Voodoo Jazz Hat" invention.

Despite the fact that I’m the sort of beer drinker who is the butt of this Foster’s joke, and that Isobel did the "Good call"-ribbing RateBeer comparison ad for BrewDog last year, this new effort from Foster’s really made me smile. 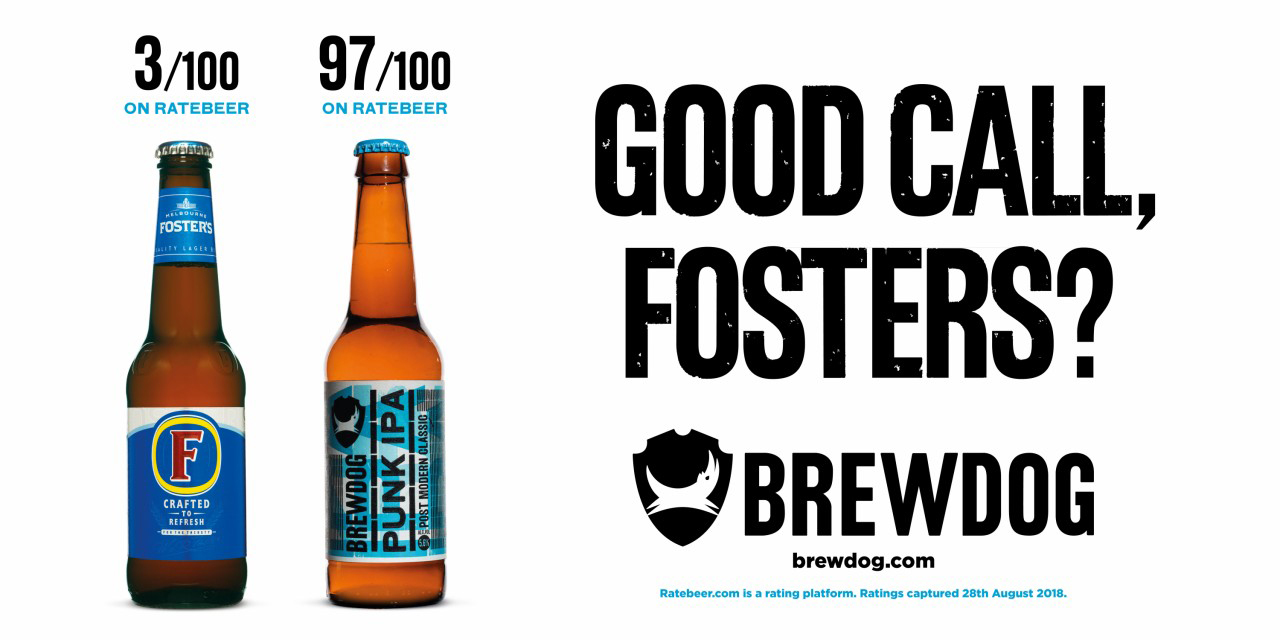 In the same way McDonald’s celebrates its position in the coffee market as no-nonsense and anti-artisan, Foster’s knows its audience well and has celebrated the fact that some people just want a cold fizzy beer on a hot day.

Most big brewers have been evolving their business models to adapt to this wave of new craft beers, mainly through buying the small brands that show the most potential and launching premium craft-ish offerings. But now we’re seeing a bigger and more noticeable reaction in how they talk about themselves to consumers. They’re starting to be more honest.

And while Carlsberg and Foster’s have reacted very differently, they have both done things in a way that fits their brand. When threatened by craft, the easiest thing to do is to adopt a little bit of craft language and plough on as normal. But as both brands have shown, that doesn’t really work. Honesty is needed. Because consumers can spot the difference.

It will be interesting to see what moves the other big players make. Will they carry on as if craft isn’t happening or act like they’re "sort of craft" too? Or will they re-examine their brand and their culture, and be confident about their specific position in this changing beer market? I’d do the latter if I were them.