Somerset House had panache, Brewer Street Car Park boasted urban appeal and Store Studios provides a sense of stylish sleek in a bustling part of the city that is constantly redeveloping.

The new host venue for London Fashion Week (LFW) and upcoming host for the associated LFW Festival across the weekend was home to both the British Fashion Council’s (BFC) show space, presentation space and lounge as it kicks off a four-year residency in the new venue. As Caroline Rush, chief executive of the BFC declared in her opening address: "Within this venue you’ll also find a show venue, presentation space, an exhibition holding 120 designer businesses showing their collections and of course sponsor experiences."

And among the onsite sponsors were Lavazza, Toni and Guy creating a salon space for buyers, and principal sponsor Sunglass Hut, which returned with two dedicated spaces – a meet and greet area and collection showcase plus personalisation on tote bags and sunglasses cases. The brand has been the principal sponsor for several years, with Rush confirming this as their last season and commenting: "We have enjoyed working with you and taking British fashion content to your 3,000 stores around the globe, increasing traffic to your stores and increasing our social media engagement."

Pantone also worked with the BFC and the venue itself to create a new colour, Nicoll Blue, and paint a wall of Store Studios in the new shade to commemorate Richard Nicoll, the English fashion designer and Central Saint Martins graduate who passed away last year. Nickelodeon and Viacom Consumer Products also unveiled the SpongeBob Gold fashion collection, created by six designers including Peter Jensen and Bad Denim, as part of a year-long campaign which will include activations, social media and product and retail launches. Maybelline and Mercedes-Benz were among the other brand partners for this year’s event.

In addition to a new venue, LFW also has a new events professional at the helm, following the departure of head of events Josef Jammerbund in December to pursue new opportunities. Senior events manager Alex Woodfield is about to complete his sixth year with the BFC and this season marked his inaugural show at the helm of the events team. Woodfield originally studied law then theatre production and the combination makes for a formidable negotiator with creative confidence. "Having a production background and then coming in to events means I can come at this from a real operations focus. Our team is really well versed in this when it comes to looking at venues and working with suppliers – we know what we are talking about.

"We are here for four years, the build has been a two-week process and we have had to put in heating, air con, lighting etc in week one. Week two has been about aesthetics, final touches on the catwalk, lounges, painting and repainting, cleaning and painting again. We’ve had to get tradesmen in to build and plaster to achieve the look we are after."

Woodfield’s team works with Blonstein Associates, the lead agency for LFW17 which also produced the Men’s Collection and he states that together this year, the teams can build on the style fostered at Brewer Street Car Park. "We delivered some great events there, it gave us an opportunity to shake things up from our Somerset House days, however it is good coming here, we work with great people and the venue is very appealing."

XYZ was among the agencies at 180 The Strand for LFW, producing the Final Boss show for Korean designer Hyein Seo, which was supported and curated by Machine-A and Nike.

Store Studios was joined by a raft of venues embracing the fashion world this February, with the British Council and the BFC joining forces with Mercedes-Benz to collectively present work by emerging designers at the annual International Fashion Showcase at Somerset House.

The May Fair Hotel, official LFW hotel sponsor, created an installation in its windows to showcase a piece of artwork designed by Roland Mouret, tying in with his 20th anniversary as a designer. Sunglasses Hut extended its association with LFW by offering the official tote bag, designed by Charlotte Olympia free with every purchase in Sunglass Hut UK stores and online during the event. Meanwhile, Huntsman hosted a family friendly day at their Savile Row store, with childrens entertainers Sharky and George providing games based on the Huntsman style and heritage, including a Huntsman tweed competition.

"In 2009, production agency My Beautiful City brought Vivienne Westwood’s London Fashion Week Show to Olympia London. Since then we’ve enjoyed a long-standing working relationship and have been waiting for the right time to create another really special event with them. When they called for Versus Versace, we were thrilled that we were able to offer them their first choice venue within the timeline they needed," explains Fred Amofa, exhibition sales manager at Olympia London. 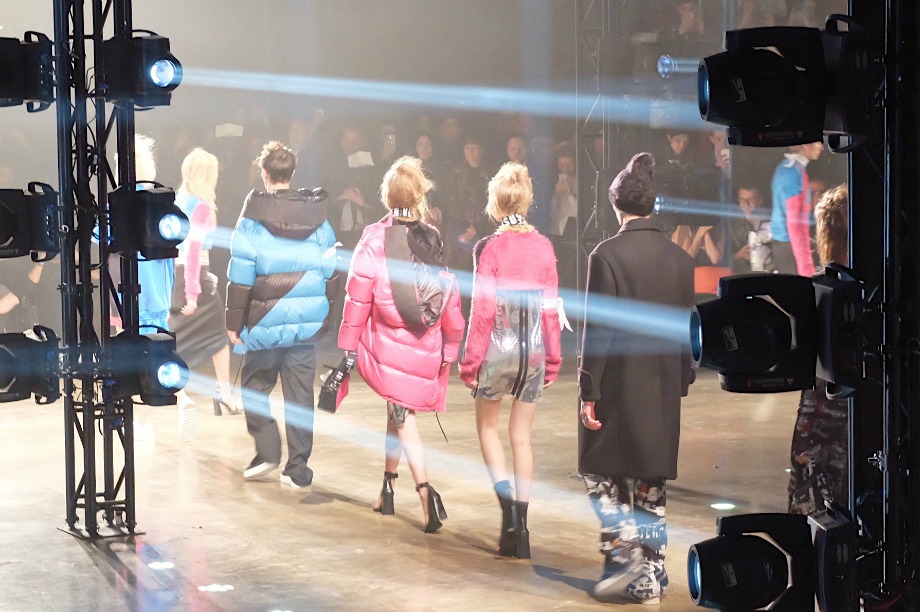 "The team is very creative in the way they use space and visual production, and they epitomise what it means to work collaboratively, allowing us to be one unified team, which enabled us all to create and deliver a successful and truly one of a kind show for Versus Versace."

Amofa is candid on whether the venue will host a show next season, highlighting instead Olympia London’s long history of hosting fashion events, from Marques Almeida’s 2016 collection to the UK’s largest gathering of buyers at Pure London.

And as the BFC cited in their opening address, the event aims to drive consumer engagement and its partnership with Ocean Outdoor ensures that it really can reach the masses. Highlights from LFW will be shown on outdoor screens across Birmingham, Glasgow, Leeds, Liverpool, London, Manchester and Newcastle. Furthermore, LFW continues to live screen its catwalk shows, with a digital schedule created of shows to be streamed online.

But the show isn’t quite over yet. The renamed LFW Festival opens this Thursday, back at Store Studios rather than Saatchi Gallery – reuniting LFW and its consumer show under the same roof. Woodfield explains: "We are selling Fashion Week to people – you are now on the front row and we’ve got that back from Somerset House days – it's an easily accessible space that now retains LFW status."

Sunglass Hut returns to the Festival, and Woodfield is eager to expand the network of brands looking to engage with a fashion savvy consumer base. "For Festival we need to work hard to bring the fun factor here and achieve both the commercial results but also the real audience appeal. Enhancing the Festival with little touches, such as adding selfie moments for a bit of fun and to create something shareable would be a goal of mine for next season – we want our crowd to have a good day with us and share their experience."

#LFW In numbers
65th edition of London Fashion Week
5,000 guests, including press and buyers from over 49 countries
51 catwalk shows and 32 presentations
£28 billion direct contribution to the UK economy from the UK fashion industry

Brand partnerships in numbers
32,000 miles will be driven between shows by a fleet of fuel efficient chauffeured Mercedes-Benz cars
20,000 espressos served and 200kg of Lavazza coffee beans will roasted on site
3,000 key cards designed by Roland Mouret will be issued to guests at The May Fair
225 makeovers will be completed for guests in the Maybelline New York Lounge on-site at LFW
80 tickets will be given away in consumer contests by Sunglass Hut

W London brings back its Finishing Touches pop-up for LFW