As he relaunches his agency, Olanipekun talks to Campaign about challenging the industry, new talent and birdwatching.

Superimpose has been one of the hottest young shops in London over the past five years, working with clients from Adidas to Burberry and winning accolades including Creative Review’s Agency of the Year.

But now, after the tumultuous events of 2020, founder and creative director Ollie Olanipekun is relaunching the business as Futurimpose, with the aim of “further breaking down and democratising the idea of an agency”.

Besides running a company, Olanipekun is also on a mission to break down the barriers to creative education and bring more diversity into the creative industries. During lockdown, he also started a birdwatching club to combat the underrepresentation of people of colour in nature.

Olanipekun spoke to Campaign about being an entrepreneur in 2020, how London’s creative scene might shift, the industry’s response to the Black Lives Matter movement and – of course – birdwatching.

What was your background before starting your own agency?

I dropped out of university after studying communications, culture and media. I opened a clothes shop in Coventry, where I grew up, and that was my introduction to understanding consumer behaviour. Buying stock for the store meant I had to travel to London once a month. I loved the energy and knew it was the place for me. I was also doing club nights in Coventry but I just outgrew the city.

I moved to London and worked in trend forecasting. I also wrote a blog with some of my friends documenting youth culture. That blew up. For me it was like the shop window where I was able to present my thinking and show off my skills.

Then the digital agency Poke [now Publicis.Poke] brought me in to work on Barnardo’s Christmas campaign. We travelled around the country interviewing young people and did a MySpace takeover at the same time as the Queen’s Speech. That introduced me to the world of agencies. From there, I worked at Work Club [acquired by Havas in 2014], Channel 4, where I won an Emmy, and We Are Social. After three years at We Are Social, I felt it was time to do my own thing. My ideas were being watered down constantly at agencies, and I wanted to switch things up.

What was your vision for Superimpose and how did that lead you to Futurimpose?

Superimpose launched in 2014 from a basement in Hoxton Square. It was an experiment – just two guys in a basement thinking: “Can a small shop challenge these big dogs with big budgets?” We wanted to upset that process. The experiment was successful and we had an incredible run, working with clients such as Adidas [our first client], Tommy Hilfiger, Netflix and Gap.

Futurimpose is an evolution of Superimpose, a more streamlined version of that original vision. It’s a vessel to be more process-driven, flexible and adaptive. We want to be challenged by people who work in different lanes and represent a new generation of creatives and build coalitions with entities doing good, from NGOs to arts platforms. We want to take learnings from big brand campaigns and apply it to more-conscious work.

It’s further breaking down and democratising the idea of an agency. There will be a London base but it won’t be a traditional office. We’ll encourage team members to work from home. I need to keep my team engaged and excited, so I have to provide them with projects they’re going to be passionate about. We’ll assign teams of creatives and strategists (which we call the cohort) to briefs that align with their interests. It will be the same core team from Superimpose but there will always be new faces as we bring in specialist talent for each brief.

At Superimpose, we pushed ourselves into being a traditional agency, with a big space and big team, and we fell into the trap of more and more clients. With Futurimpose, we want to keep our overheads low so we can say no to clients coming to us for the wrong reasons. This will be about long-term partnerships with fewer clients. We’re continuing to work with Adidas Originals, the Tate and Fendi, plus some clients still at early stages.

We were experimenting with this at Superimpose, but Covid fast-forwarded our plans. In the last few months, with Covid and the Black Lives Matter movement, we are having to take a really active approach to how we’re working and living.

Since you won’t have a traditional office and many other businesses are making the same choice because of Covid, do you think London – and specifically east London where you started – will lose its status as a creative hub?

A lot of the success that Superimpose saw was because we were part of that creative bubble of east London – there was so much talent around and we were part of that network. We were able to pull on specialist skill sets a lot easier because we were surrounded by them. Gentrification has naturally changed the landscape of London. That creative hub has moved to south London, which has colleges like Goldsmiths. We’re seeing so much more innovation coming out of that borough than the tech space that Shoreditch has now become. London as a whole will always see incredible talent coming up. But we need to embrace that change, particularly to help lower the barrier to entry of not being able to live in London.

You’re very passionate about giving more people access to creative education – is that something you’ll continue to focus on?

At every agency where I worked, I was the only black guy in the building besides the cleaners and maybe the security guard. I always knew I had to make smoother pathways for other people who looked like me to get into the industry.

With Superimpose, it wasn't just about the shiny brand campaigns, it was also challenging the way the industry was set up. There is a box-cutter approach for creatives to get into the industry: they get a uni degree, come to London and intern for free because they can afford it, then get a job.

At Superimpose we launched “Supercurriculum”, an alternative learning platform that challenges the notion that the classroom is confined to four walls. People can learn in all types of ways and it was about giving the next generation of creatives the tools they need to break into the industry. We partnered with University of the Arts London, Warwick, Coventry University and D&AD. With Futurimpose we are still speaking to those schools and we’re going to work with them to create initiatives and activations where they are getting us access to young people. With the Coventry and Warwick initiatives, we’re working with 14- to 16-year-olds, because we believe if you can get them as they’re preparing for GCSEs and showcase opportunities in creative industries, then you’ll have more success reaching them after when they're already in college and choosing courses. We want to focus on that age group.

On your point about having been the only black man in many agencies, how do you think the industry is responding now to the Black Lives Matter movement?

I’ve been that guy who’s been banging that drum for most of my career. Hearing about all of these new lists and company commitments, it still feels like lip service. The industry is still a long way from even understanding what needs to happen and what needs to change. It starts with taking accountability and a lot of people aren’t willing to do that. You’re guilty and there’s no escaping that. But only after taking accountability can we have an honest conversation. Those are the things we need to address first before we hear about these initiatives.

Signing petitions is not enough. We need to see action. People also need to be prepared to make mistakes. Action will lead to mistakes and that's okay.

You once said in an interview: "Advertising needs us more than we need it." What did you mean by that and is it still true?

Advertising should represent the real world and it hasn’t been doing so. That’s not a secret, it's common knowledge. If you're hiring with that box-cutter approach, the life experience isn’t there so how can the industry dictate to the country what to see, feel and like? It can’t. We’re just churning out the same, same, same work and we’re losing audiences. For the industry to carry on and be successful, we have to start opening our doors and letting in different minds that can tell real stories with real people.

During lockdown you started a birdwatching group, can you tell me about that?

I’ve been birdwatching for the last decade and it helped me gain perspective during my stressful job. During the height of the pandemic and lockdown, I was leaning on nature even more because I was under even more pressure.

One day I went to my local park in Clapton and was taking photos of the birds around, and someone commented on every video and named all the birds. I clicked on their profile and thought it was going to be a middle-aged white guy somewhere up North, but it was this young, black guy. I was like, oh my god, are you into birds? He said yes. Again, I thought he’d live in Sheffield or somewhere up North, but he lives in Stoke Newington. My next words were: we should set up a birdwatching club. I’d had that idea for a long time and it was always met with jokes or people who said it’s a white thing. 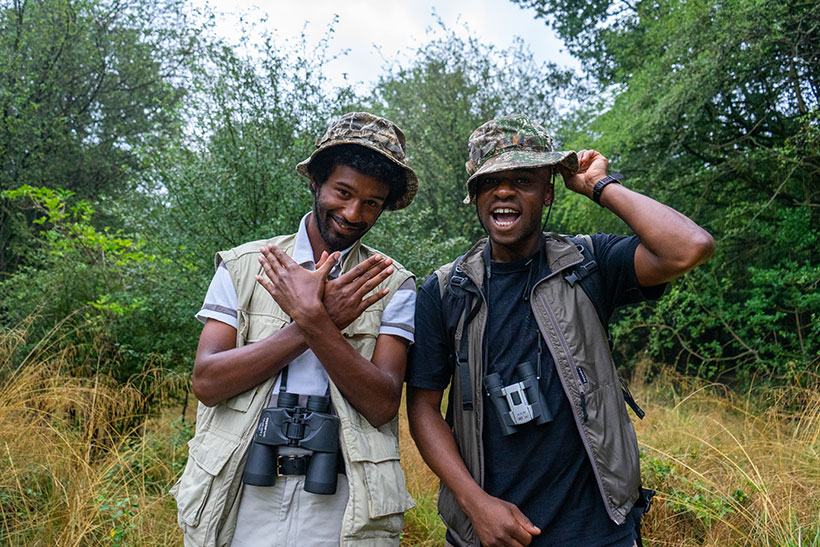 We wanted the underrepresentation of black, brown and people of colour in nature to be challenged. Why is this not normal? Nature is free, so the barrier to entry is very low.

We met up and organised our first walk at the Walthamstow Wetlands. The response to it has been mind-blowing. We partnered with the Royal Society of Birds and brands are queuing up to work with us. Our most recent walk was at Epping Forest and 54 people travelled from across London. Our group, Flock Together, is about the ecological benefits of protecting nature, but also mental health. Across the country and the world, mental health is very apparent now for all of us. My ambition is to have a Flock Together group in every city of the world, so you can meet black, brown and POCs who have gone through similar experiences and you can have a safe space for encouragement and support. 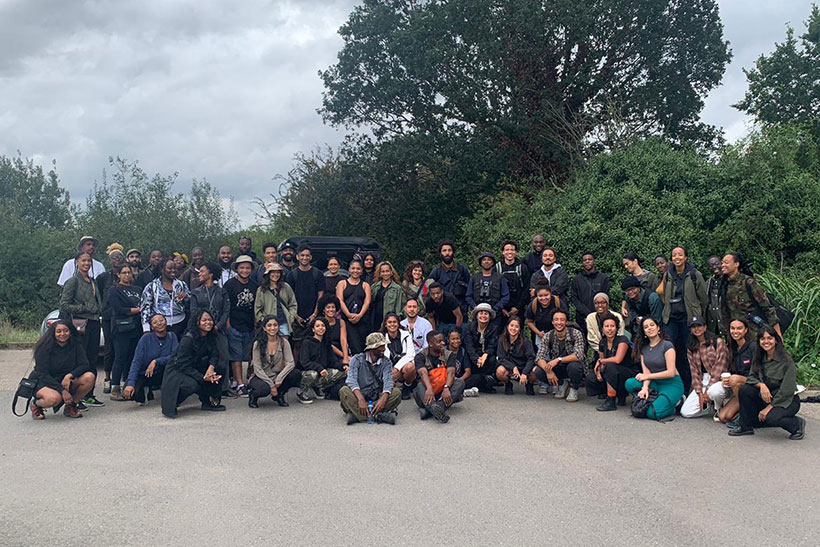 Dwindling creative education must be our industry's next frontier