Imagine if Townshend became an actor and Strong a German lawyer...

In a parallel universe John Townshend could have been treading the boards, soaking up the smell of the greasepaint and the roar of the crowd – a darling of the silver screen – and Mark Strong could have been a lawyer in Germany.

Quite whether Townshend would have had the same success as his old college friend, who famously appeared as Sinestro in Green Lantern and Jim Prideaux in the 2011 remake of Tinker Tailor Soldier Spy, and is known to TV audiences from roles in Our Friends in the North and The Long Firm, the latter of which netted him a Bafta nomination, is an intriguing question.

"I’m actually a frustrated thespian," Townshend admits. "At school, my big thing was acting. I had quite a lot of female parts when I started, but that’s very Shakespearean, right? I was Calpurnia [in Julius Caesar]," he says, chuckling.

Fortunately for their respective industries, Strong abandoned his German law degree and turned to acting, while Townshend directed his talents towards advertising.

At face value, Townshend, the charming and giggly founder and chairman of Now, with his Pears Soap boy-like mop of hair, and Strong, the shaven-headed Olivier Award-winning actor, with a brooding intensity that leads him to bag largely cold, villainous roles, might seem unlikely soulmates.

It’s not just their looks – Townshend also sports a comfortably middle-aged paunch, of which he is overly conscious, while Strong is lean and taut – it’s their backgrounds, too. Townshend, a self-confessed "posho", is a blue-blooded, Etonian son of a marquess, while Strong was born to immigrant parents. The latter’s birth name was Marco Giuseppe Salussolia.

Quite rightly, none of this matters much, as they try to remember the first time they came across one another. The two met at Royal Holloway College, where Townshend was studying history and politics, and Strong, English and drama. However, they differ in their accounts over the exact moment.

"It was at a Paul Young and the Q-Tips gig at Royal Holloway College. I’m sure I saw a bunch of guys having fun in the room, and I thought: ‘Who are those guys?’ It was John and a couple of guys in his year, whom he lived with," Strong recalls.

Townshend is insistent that it was in a launderette. "But you never washed your clothes, so how can that be?" Strong jests.

Whatever the circumstances, their friendship has endured for 30 years, and after that first meeting, they ended up sharing a house together in Wraysbury (next door to Gary Numan’s parents, apparently) for two years.

"Mark was the improbably good-looking, new person who all the girls were talking about when he arrived. We just thought who’s this…," Townshend says, trailing off to comedic effect.

There followed plenty of stereotypically studenty behaviour. Raucous partying and daft pranks alleviated those periods of inactivity and boredom that studying can involve. This, the pair say, helped inspire them to explore their creativity further.

"We’d just play and muck around," Townshend adds. "One time we had a nativity party where Mark was a nun and I was the Virgin Mary and I gave birth to a pheasant."

"No it was a pillow. I was the midwife and it was a pillow," Strong interjects. "I gave such a lifelike impression of the birth that I fainted," Townshend continues.

These high-jinks were the furthest Townshend explored acting while at university ("I didn’t act – I acted up"), but Strong was rather more committed to the profession. 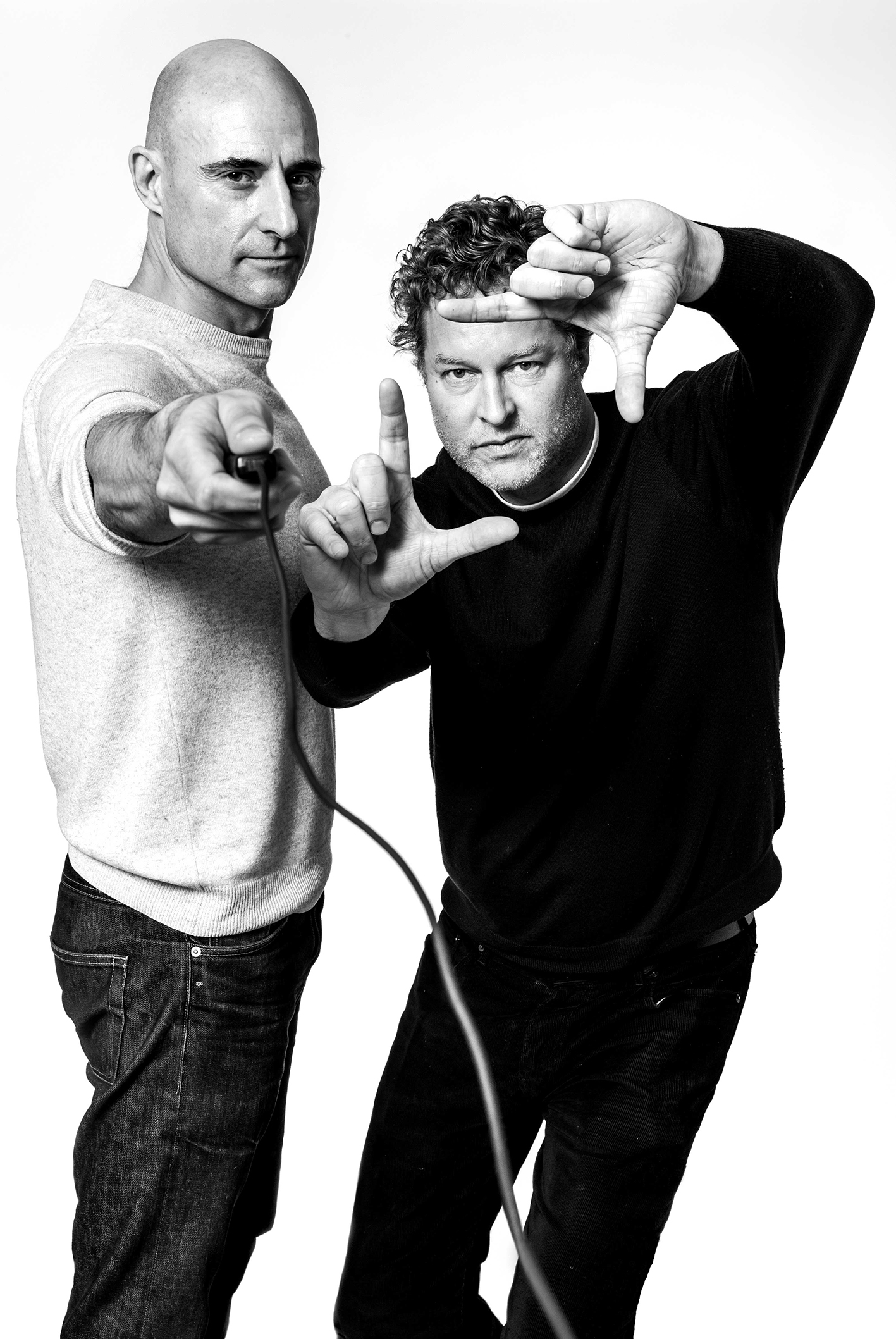 "They had a studio theatre at Royal Holloway where you could do the practical stuff – it wasn’t just academic. It was then that I realised that I wanted to act," he says. "And it was John early on who was supportive. I remember doing Ibsen’s When We Dead Awaken, which is one of the darkest plays you can imagine, and we were all 19 years old trying to do it. So I was just testing the water. But the time it worked was in East, which is by Steven Berkoff, and John was very supportive of it and that made me think perhaps I could do this for a living."

Townshend adds: "I always remember that play because it was in a small theatre and Mark was about five feet away and I remember I said, ‘I forgot it was you’, rather than it being a mate in a play. That’s when I knew you were brilliant. I forgot it was you."

A slight silence follows before Strong adds, meaningfully: "Oh, thank you – that’s very kind of you." It is as if the two are more used to ribbing each other than paying each other compliments.

Following graduation, Strong’s talent – and self-confessed bloody-mindedness – meant that he went off to study drama at the Bristol Old Vic Theatre School.

"Back then, everyone told me don’t do it – it’s a mistake," Strong says. "They’re not wrong, it is a difficult profession to forge ahead with. I just found something I clicked with and engaged with."

Townshend’s path into the creative industries was also atypical for someone of his background, evidence of a similar determination to defy expectations. "I looked at lots of jobs like PR and the City and merchant banking, but I had a friend at CDP whom I went to see, and thought this was something I could get excited about," he says.

"I wrote to the top 20 agencies. I knew I wanted to do something fun and I was reasonable at writing. I didn’t apply to be a creative, I was brought up to be a suit. Out of the top 20, I got zero response. Then I rewrote my CV and I got a job at D’arcy Masius McManus, then went to Ogilvy & Mather and became a creative copywriter there. I did a copy test, worked at night to do the D&AD test, and they eventually gave me a job as a writer."

Townshend says he was always conscious of his background – and, indeed, on occasion given a hard time because of it – but that the creative industries were more meritocratic, than, say, the City.

Strong and Townshend’s relationship moved beyond the personal to the professional when the latter was writing a campaign for Fiat and looking for a spoof Rapido-era Antoine de Caunes-style presenter to make witty remarks about the cars. Townshend suggested his old friend.

"We did a casting and the Italians liked Mark but said [adopts Italian accent]: ‘You can’t have the baldy one for Fiat, it’s not stylish.’ So Mark put a wig on and a suit on, and we lit him and he looked like a young Andy Garcia, and they said: ‘He’s very nice.’ And it was Mark, so then we did a series of three years."

"We described that as ‘Wraysbury with finance’ – the fact that people were paying us to lark about," Strong adds.

He claims that he can spot a Townshend-originated piece of work with ease. "I love the quirkiness. I can probably spot a John ad at 100 paces. I feel there’s something unique and different about them, which comes from his personality and sense of mischief. He’s never been afraid to push the envelope a little bit and do something more interesting than the next person," Strong says.

The two continue to collaborate professionally on occasion, despite having chosen different routes in which to express their creativity.

"I can trace it all back, really, to that sense of fun and feeling – like, just be open, warm, generous and honest, and I learned that from John and that served me well in my business," Strong says.

"That probably sustained having a career. I know a lot of actors who have fallen by the wayside because they’ve been a bit difficult. It’s interesting that part of the longevity goes back to that time."

Townshend adds: "Mark’s always been there. We’re quite similar in that, outwardly, we’re extrovert and friendly, but also quite protective of ourselves. In any emotional difficulties, the first person I’ve always spoken to is Mark. Where some people judge you, Mark doesn’t. He’s always made me feel better about myself when I’ve felt doubtful."

Strong also turns to Townshend for an honest view of his work: "John is one of the only people that I’ll go to for a genuine opinion, and you need to know what the audience is thinking. The length of time I’ve known him means I can trust him and I know I’m going to get the truth."

While Strong and Townshend are approaching their late fifties, a time when many people have an eye on a quieter life, both continue to exude energy and ambition. Strong, as well as securing major acting roles (he is due to appear in a Disney film to be released next year), has moved into executive production, with Temple, a Sky One adaptation of the Norwegian TV show Valkyrien. He also stars in the series.

Townshend, meanwhile, has just completed a reboot of his independently owned agency, including the appointment of Larissa Vince as chief executive, in a bid to move it to another level.

But what continues to motivate them? Strong says: "When I started out, I just took work, but now it’s the character, it’s the part. People remember parts. So I’ll always choose something that’s memorable. There’s normally a checklist of character, director, script, role, location. Probably, the fee comes in there somewhere as well," he says, laughing.

Townshend responds: "The first thing you want to do is [something that means you can say]: ‘I did that.’ But as you get older, what’s most rewarding is taking people who are young and watching them blossom. That’s the new reward.

"I’d like to do something famous for us. I’d like everyone in the business to be really respectful and want to work here. I feel likeevery day is like starting again. We’ve got a whole new agency. So I feel buzzy."

Strong agrees that creating a legacy resonates with him and his feelings for his chosen career path. "That’s not dissimilar to the film business – everyone wants a film that will live forever. I don’t really rest on my laurels. I’m still looking forward. Still ambitious, still excited," he says.

And with that, the two hug each other warmly, Strong exits stage left to go back to the Shepperton film set where he is filming an adaptation of Cruella, alongside Emma Stone and Emma Thompson. Townshend, meanwhile, suggests we go for a pint.

Good Lord! Larissa Vince is off to Now

Ever noticed how all film baddies are Brits and drive Jags?