I had a drink the other day with a young designer who has just struck out with a couple of partners to launch their own business.

They spent hours on eBay buying funky mid-century furniture for their new office and invested in one of the most expensive coffee machines an overdraft can buy – but it’s been slow-going. My drinking partner turned up 20 minutes late for our meeting because, just as they were waiting for a juicy brief to be e-mailed through, the office Wi-Fi had suddenly disappeared and none of them could work out why.

Having to deal with all the little crappy things – such as disappearing Wi-Fi – is, of course, part of the frustrating joy of doing your own thing. As is worrying about paying your mortgage, feeding your family and what failure would do to your professional reputation. Owning your own business has to be scary and hard, and if that’s not your thing, stick with the cushy establishment.

I remember years ago having an expensive lunch with a smooth adman who had just unveiled his own agency. He had a lucrative client on board before he started and – just weeks into his new life – told me he was spending most of the summer in the Hamptons, flying back to the UK whenever he was needed. "But that’s not what starting your own business is supposed to be like," I observed. He curled his lip. And his company is no more.

Anyway, all of this is a preamble to the real business of entrepreneurialism, and why it’s such a vital life force in our industry. Most of our greatest agencies have local entrepreneurial roots and – at their best – their corridors still echo with the principles of the founders: Abbott Mead Vickers BBDO, Adam & Eve/DDB (whose offices in Paddington are still traced with the glories of Boase Massimi Pollitt, rejuvenated by the A&E founders), Bartle Bogle Hegarty, Mother, Saatchi & Saatchi, M&C Saatchi and on to the less plentiful new generation.

Many of these shops are now owned by multinational holding companies and continue to thrive, though how long their success will survive the passing of their founders is open to question (look what happened to Howell Henry Chaldecott Lury for a worse-case scenario). But our graphic (below) tells a very clear story: agencies where the management have a degree of ownership significantly outperform the rest of the market. If any budding entrepreneurs needed the encouragement to push their agencies to open up equity ownership to the management team (as M&C Saatchi recently did), here it is. 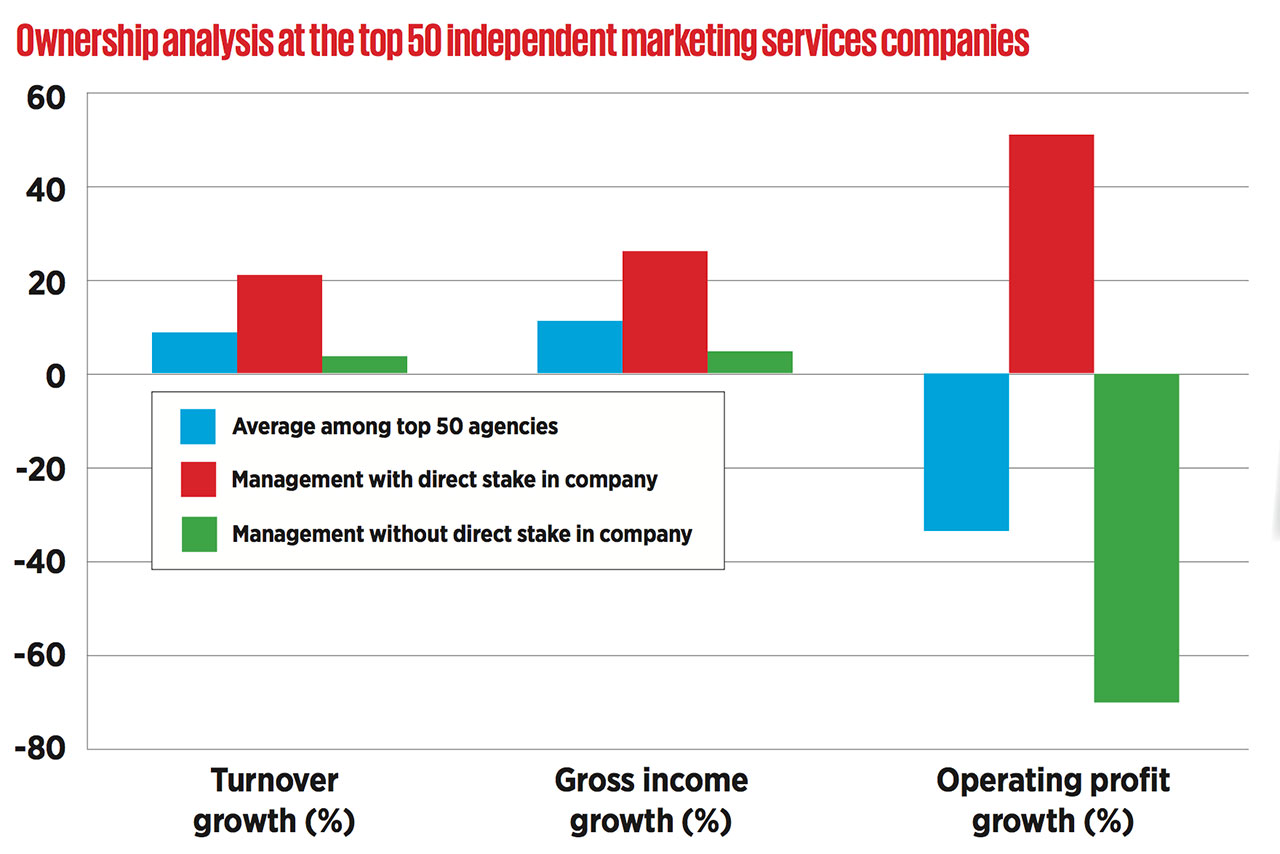 I would also argue that creativity is more likely to thrive in a business where the key team have personal skin in the game, and are empowered to say "no" and fire clients. God knows, the industry needs to up its creative game.