Samsung has launched a smartphone that looks like a dumb phone, Marc Curtis, head of labs at TMW Unlimited, thinks it completely missed the point, particularly for drug barons.

I’ve recently found myself shopping for a dumb-phone. Something that speaks of a halcyon age when the mobile in our pocket remembered numbers and enabled us to talk to people. Texting was a pain, and required adults to indulge in txt spk. Yes, 2006 was a simpler, purer time.

It’s the digital equivalent of leaving the milk and newspapers on the doorstep; use a dumb phone for a weekend and Google will probably send someone round to check if you're alright

I accept that I am sometimes guilty of deliberately making life difficult for myself, but on this occasion my obsession with older, less ‘featured’ technology is symptomatic of the zeitgeist.

Much has been written about the growing feeling that we are experiencing a backlash against the constant encroachment of digital technology in our lives. This reaction stems from the increasing number of notifications, messages, nudges and interruptions. However, rather than ostracise ourselves from the connected society, single use technology provides us with some middle ground.

The Kindle is a good example of this - a device that uses technology to make literature more accessible, and yet doesn't interrupt you with Facebook updates. Try reading a Kindle book on an iPad. The experience is punctuated with trips to email and Twitter. The book gets skimmed, not read.

Dumb phones offer a similar relief from the noise. You retain a connection to the world, but anything more than SMS requires a trip to computer. Dumb phones are the perfect way to leave Google Now behind. It’s the digital equivalent of leaving the milk and newspapers on the doorstep; use a dumb phone for a weekend and Google will probably send someone round to check if you're alright.

This is why there’s still quite a market for dumb phones. Nokia make a basic handset, no camera, no touch screen for £15. The battery will last a week and data is not something that you’ll see on your bill. Phones like this are often referred to as festival phones, party phones or ‘Burners’. A phone so cheap that it becomes almost disposable.

In the US, the classic burner is the clamshell phone. Call your local drug baron, hang up, snap in half and drop in a dumpster. Americans love a clamshell phone almost as much as they love BBQ pork.

So will the newly announced Samsung SM-W2016 satisfy needs of the digitally toxic as well as keeping festival goers stocked up with indestructible losable handsets?

Here are 5 more reasons why Walter from Breaking Bad will not be upgrading to the new Samsung clamshell phone.

1 - Samsung has taken a high end smartphone, touch screen and all, and added a clamshell number pad. Let me ask you this, how many people dial numbers rather than click on a link or retrieve one from the address book? Yeah, I thought so. 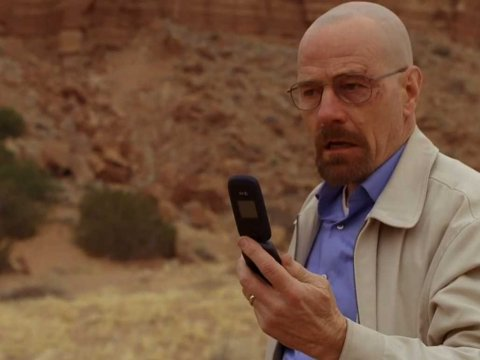 2 - In his treatise on interface design ‘The design of everyday things’, Donald Norman goes into some detail about how poor an interface a dial pad is for anything other than entering a phone number. So either the phone has a keypad what can only be used for dialling numbers you’ll never dial or it has a keypad you'll despise for preventing you from accessing other functions.

3 - This phone will not be cheap. Certainly it will get nowhere near the Nokia 105. Drug barons are not made of money.

4 - Pleasant feelings of nostalgia for retro technology last about 30 seconds once the reality of having to wrestle with a flippy lid thing during winter and whilst wearing thick gloves.

5 - Walter died in the last season of Breaking Bad. He’s beyond the reach of 3g now. Apologies for those of you who haven’t seen Breaking Bad, but it’s better you know now.

So, looking for a phone that will help you digitally detox without turning you into a luddite, but retains that all important 2006 aesthetic? Then look no further than the Samsung E1270. It’s around £300 cheaper, has a built in FM radio (for when you’re waiting for Saul to call) and most importantly, you won’t think twice about snapping it in two and dumping it down a storm drain.

Trends 2016: marketing in the post-everything era

Marketers' 2016 predictions: from the video explosion to the next 'new normal'

Posting without purpose: why it's time content marketers questioned 'always on'